Thank you for sending “New Life” for review at Dear Author. I was immediately fascinated by the storyline of a young man, Jason Reitmiller, whose promising future was cut short when he suffered brain damage in a motor vehicle collision. Jason now works as a night janitor in the building where the heroine’s law firm is housed. 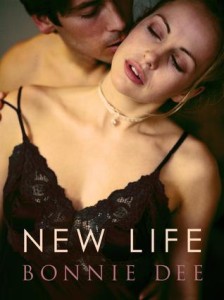 Individuals with brain damage have varying degrees of issues and so Jason’s symptomatology seemed believable; however, there was slippage at times. His issues manifest into poor impulse control, lack of concentration, and anger but sometimes it comes across as just general douchebaggery such as when Jason is in informal group therapy and pretends that he is guilt ridden at the loss of his brother in the car accident. He has no brother.

But in a scene at his sister’s softball game, Jason struggles with the proximity of the crowd, his aching hip, and the constant worry of his parents that he’s functioning like a five year old.  Jason explains that routines fill his life and one step outside the routine can result in ruination.

Many of the things I used to do aren’t possible for me anymore. Simple functions I once did with a fraction of my attention take much longer and require concentration. If I lose focus on each step of taking a shower, for example, I’m likely to go around all day with conditioner in my hair.

More interesting to me was the class struggle between Jason the janitor and Anna Stevens, the lawyer. Her co worker mocks her for having a fetish and suggests she is lowering herself to be with Jason.

“Bullshit. He wasn’t testing the chair for a squeak. Looked like you guys were having a conversation and that’s…weird.”

I stabbed the cherry in my drink with a toothpick over and over. “Why would it be so weird to have a conversation with the guy?”

“So what?” I looked at her. “We live in a classless society.”

“Except we don’t. Not really. And anyway, the guy’s got mental issues, doesn’t he? You can’t honestly be thinking of tapping that.”

Anna, a new lawyer, feels the pressure acutely to fit in and look the part. Being with Jason presents Anna with two conflicting emotions. On the one hand, there are no expectations with Jason. On the other hand, Jason’s tendency toward quick rage and lack of impulse control can result in real embarrassment for her.  But their attraction toward each other is very strong and it is clear the two enjoy the time spent together outside the bedroom.  Anna and Jason’s story doesn’t end with the traditional marriage and babies but the ending fits their relationship.  However, there are a couple of scenes at the end of the story which made me doubt the permanency of the relationship.  Still, I felt this romance was definitely something outside the ordinary and I appreciated that.  B-

→ Jane
Previous article: REVIEW: The Great Escape by Susan Elizabeth Phillips
Next Post: Open Thread for Readers for May 2013