With the young adult genre being so popular and prolific these days, it’s pretty hard to stand out. So many vampires, werewolves, faeries, and zombies, oh my. But when I stumbled across your debut and learned that it was about dreams and Edgar Allan Poe, it caught my interest. Dreams are still a relatively uncommon trope in the YA genre and since Edgar Allan Poe is one of my favorite dead authors, I decided to give this a try. 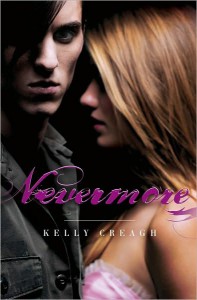 Isobel Lanley is Trenton High School’s most beloved cheerleader, their #1 flyer. (The cheerleader who does the most difficult aerial stunts.) Her boyfriend is a top football player, her best friend is a fellow cheerleader, and their crew of friends are more of the same. At her school, which has a very clearly delineated social hierarchy, she’s the cream of the crop.

Unfortunately, popularity doesn’t give rise to good grades and she’s perilously close to flunking English. And if she flunks English, she’s off the cheerleading team. But hope comes in the form of an English assignment where students are assigned in pairs and are to give a presentation about a famous author. Too bad her assigned partner turns out to be super-goth, Varen Nethers. Seriously, can his name be any more goth? For Isobel, this is social suicide.

Despite a rocky start, Isobel finds herself drawn to Varen and vice versa. But as anyone familiar with fictional high school social hierarchies can tell you, relationships across cliques are expressly forbidden and any trespasses will be severely punished. On top of that, Isobel starts having strange dreams and even stranger things happen when she’s awake. She knows Varen is at the heart of it but how? And even more importantly, can she save him?

I must have been exposed to far too many narratives involving mean, airheaded cheerleaders. I had a very tough time initially with this book. My first impressions of Isobel were anything but complimentary: airheaded, snobby, vapid, and shallow. Could she be any more stereotypical? And don’t even get me started on her friends who share many of the same characteristics plus meanness to boot. I was really doubtful.

Then we see Isobel’s love of cheerleading. Movies like the Bring It On series aside, we don’t really see cheerleaders as fully fleshed out characters in books. They’re often the antagonists of the more common misunderstood, ostracized YA protagonist. But Isobel really loves cheerleading. She’s proud of it and with good reason — she’s very, very good.

So that, combined with Isobel’s thawing heart towards Varen and his eccentricities, helped me warmed up to her. And when her crew of friends retaliates against Varen for daring to hang out with Isobel, we see that she does have a good heart and a strong sense of right and wrong. I think Isobel is a good illustration of how a person can exhibit different traits depending on the people that surround them.

In a genre where it’s so popular to have absent parents — whether due to death or just conveniently not being present — it was nice for Isobel have such a strong relationship with her parents and her little brother, Danny. On other hand, I wished her boyfriend, Brad, wasn’t such a football player cliche. Not too bright, definitely not above beating up those lower on the social hierarchy, and extremely jealous of anyone who looks at his girlfriend. I understand that it was meant to contrast against Varen who, by all accounts, should be completely wrong for Isobel, but Brad had no redeeming characteristics whatsoever. When Varen asks Isobel what she saw in him, her response is, “I don’t know.” Great, but I couldn’t either.

Paranormal YA is a popular subgenre but what struck me as different was the gothic tone of Nevermore. It’s fitting because there is a tie to Edgar Allan Poe, after all, but there were sections that were genuinely creepy. I don’t really encounter that much in YA these days. Creepy subtext and implications, sure, but not creepy atmosphere, dreams, or images. I like that.

After Isobel’s social circle falls apart, I definitely enjoyed seeing Isobel form a different group of friends. I loved Gwen. Her interactions with Isobel were far more dynamic and engaging to read than those first exchanges between Isobel and her best friend, Nikki. I hope that changes in the future because despite everything, Nikki apparently considers Isobel to be a true friend and much of her initial antagonism is due to the fact that she felt like she was being ignored.

As readers can probably surmise by the previous paragraph, this is indeed the first of a series. We really can’t escape them in YA these days, can we? What I look forward to, however, is that like in this book, the main plot will be about a girl trying to save the boy she loves.

In some respects, I thought this book was a bit too long. I felt it could have been shortened without losing impact. But other than that, I look forward to seeing Isobel go to Baltimore, the burial place of Edgar Allan Poe. B-