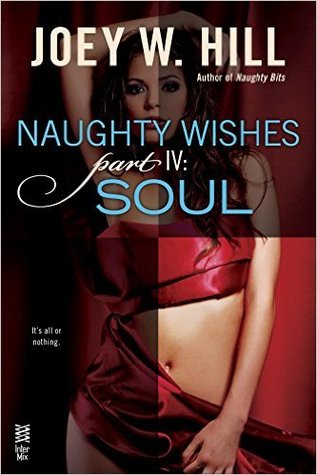 By the time I finished parts I, II and III of this serial, I admit I was suffering from a bit of sex fatigue. The series was written to be read in small bites and I kind of gorged myself and felt “overfull”. So I took a break. For me, the problem with taking a break from a book or a series is there’s a very good chance I won’t circle back around to it at all. And, if I hadn’t committed to reviewing it, I probably wouldn’t have gone back to this one either. Apparently my attention span is quite small.

Soul is the book where each member of the triad has (mostly) sorted out their individual issues and now they are navigating a three-way sexual relationship. Will it be a fling? Will it be more permanent? How will they deal with the inevitable issues which arise if it is more permanent – family and friends especially?

The way the series has been going, it is clear that these three people have very strong feelings for one another and there really is no likelihood they’re only having a sexual fling to “get it out of their systems”.  When Chris, Geoff and Sam go on their first public outing as a triad, they do come up against some resistance from people (mostly, drunk guys it has to be said) who make false assumptions about Sam. I thought Sam’s reply to this was a little unrealistic. I mean, sure, way to stand up for yourself Sam but really, they don’t GAF and who’s going to actually say all that anyway?

The sexy heats up even further when Geoff, Chris and Sam head to a fetish expo/theatrical event hosted by their friend Madison – the owner of “Naughty Bits” an adult shop they’ve been frequenting for a little while. Madison and her Dom, Logan, are, I gather, featured in their own serial which predates this one. I haven’t read the earlier series but for those who have, there is a very nice payoff for Madison/Logan fans here.

The weakness in the story, I think, is that this trio already love and trust and respect each other so their journey was almost entirely sexual. There was little actual conflict and, once they had decided to go for it, nothing was keeping them apart. They didn’t experience any serious resistance to threaten their relationship and so rather than a bang, the series ended with a bit of a fizzle. (Except, it totally ended with a bang – just, the other sort.)

There was also this, which bugged me because gender essentialist.

Then, because she was delighted, and being a girl made such gestures completely acceptable, she twisted around and flung herself at both of them to hug them close. It allowed them to put their arms around each other, a three-way hug she knew would add the right kind of emotional follow-through to what they’d just told one another. Girls were good for that, too.

As for a rating, I’m giving Soul a B- and the series the same. The first two parts may or may not have been objectively stronger but the latter two brought in an element of reader fatigue which impacted my enjoyment of the story.