From time to time, if I really like a book, I’ll ask the author of the book for a recommendation. In other words, what books has she read that she has enjoyed. After reading and enjoying Liberating Lacey so much I had one of these exchanges with author Anne Calhoun. From this email exchange, Anne gave me two recommendations: Willing Victim by Cara McKenna and Silent Watch by Elle Kennedy. I had Her Private Avenger and pulled it out. 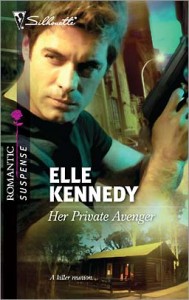 I think I’ve mentioned before that I’ve often had problems with these category sized suspenses because it is hard to fit in both a compelling romance and a compelling suspense in such a small space; however Her Private Avenger managed to deliver on both the suspense and the romance, primarily because of two things (in my opinion of course).   First, on the suspense side, there wasn’t too much going on.   Morgan Kerr’s car went over a cliff and her father paints this as a suicide attempt.   Morgan has gone into hiding. Her father asks her former fiance and kidnap extraction specialist, Adam Quinn, to bring her back.   Adam has spent two years trying to get over the heartbreak he suffered when he and Morgan had called off the wedding but he stills cares for Morgan more than anyone.

"You can pretend all you want," the other man added, "but we both know you still care for her. And you might be a bastard, but you'd never walk away knowing Morgan might be in danger."

Quinn swore under his breath. He loathed this man. Loathed Kerr's manipulation and arrogance and those guilt cards he liked to throw out whenever it suited him.

But the son of a bitch was right.

No matter how bitter he was, no matter how angry and disappointed, if Morgan was in trouble, Quinn couldn't turn his back.

Quinn quickly finds Morgan but is convinced that she would never attempt suicide. Instead, he believes that someone tried to do her some harm.   Morgan is trying to find out more information about the recently discovered body of her best friend who disappeared back when Morgan was in high school.   Quinn agrees to rattle a few cages with Morgan.   Someone, however, wants Morgan to leave this mystery unsolved.   Thankfully, there isn’t any too stupid to live moments and you managed to slip in a few surprises while providing at least a couple different alternatives to the villain.

Second, the romance rests upon a shared history so that at the start, we don’t need to see the love relationship built, only rediscovered.   Morgan “betrayed” Quinn by requesting that the wedding date be pushed back at her father’s request.   This was the last straw for Quinn.   Because of Quinn’s childhood involved living in multiple foster homes, he really needed to be with someone who put him first and Morgan was never doing that so long as she was taking orders from her father.   Quite a bit of the story is told from Quinn’s point of view and we get to understand the depth of his hurt as well as the depth of his love for Morgan.   Even if he could not live with Morgan because he believed she could not provide him with the return commitment, it was clear he would never love another woman.   (In fact, both parties are faithful during their separation.)   We see less of Morgan’s character growth and I was a bit frustrated that her return to Quinn wasn’t so much because she could not live without him but rather that in conjunction with Morgan’s disillusionment with her father.

Other things that didn’t work so well is that Morgan was able to become a successful and respected journalist despite her Senator’s father constant framing her as mentally disturbed.   Further, there wasn’t an explanation for her father’s mistreatment of her.   His total lack of regard for her feelings or sensibilities was hard to swallow without any justification. We don’t really get to see much of the breakdown of the relationship.   I used scare quotes around the word betrayed previously because I thought it was a very harsh word for what Morgan did.   Was her lack of spine as it related to her father a betrayal of Quinn?

Quinn is one of those big alpha appearing guys who is tender and sweet on the inside. He loved Morgan and really needed to be loved back.   While he tried to push her aside (and at one point does a pretty assholic move toward Morgan but I felt it came from a place of deep pain and was able to move on from there), his slide back into her arms was inevitable.   Morgan, too, wasn’t right without Quinn.   She regretted that her actions resulted in Quinn leaving her.   She was never happier than when she was part of Quinn’s life and she missed him desperately.   I really rooted for these two to end up together.   I’m off to buy Silent Watch.   Hey, do you have a recommendation for me?

I can only find this for sale in Kindle format. Even over at the Harlequin site, it shows this book as print only.

→ Jane
Previous article: Tuesday Midday Links: Self publishing stock rises and so does traditional publishing
Next Post: REVIEW: Desires of the Dead by Kimberly Derting