When you handed me a hot-off-the-presses ARC of your new paranormal release, My Immortal Assassin, I was both excited and nervous. Excited because I had wanted to try your paranormal books, and nervous because a) I know and like you and didn't want to hate this book, and b) I've found myself disillusioned by paranormals of late. I guess I should not have worried so much, because I did enjoy My Immortal Assassin, even if I'm not completely sure I understand some of the foundational worldbuilding. 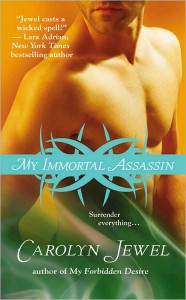 Anna Grayson "Gray" Spencer desperately wants to kill the mage Christopher dit Menart. His crimes against her and her family are myriad, starting with his attempts at using her as a fertility farm for future magehelds (those magically bound to serve a mage) and ending with the murder of her sister. If it were not for the demon Durian (don't these guys ever have last names?!), she might have managed it, too, but Durian's own oath to the warlord Nikodemus prohibits him from allowing a mage's death if he is in a position to prevent it.

When Durian first comes upon Gray, he is not sure what she is, or whether she is even sane. She possesses the magic of one who has performed a sacred ritual, including a sacrificial murder, but she insists she has performed no such ritual. Human but in possession of demon magic, as well as something else, Gray confounds Durian, but she also intrigues him, in part because he shares her hatred of Christophe, but also because she has no idea how to control and channel her recently acquired magical abilities. Christophe, for his part, is determined to capture Gray, who has inadvertently taken something from Christophe that he is determined to have back – and to punish Gray most painfully in the process. Gray is a strong woman, but in her present state she is no match for either Christophe or Durian's superior magic. Durian, though, doesn't seem inclined to do her harm – at least not yet.

So in exchange for an oath of "fealty" to Durian, he promises to help her manage who and what she has become. And maybe, together, they can find a way to avenge Gray's sister without breaking the complex series of oaths and rules by which the mage and the demons maintain their tenuous balance of power.

My Immortal Assassin is the third book in the My Immortal series. In several ways it reminded me of Mejlean Brook's demon series: the San Francisco setting, the moral ambiguity between the mage and the demons, the complex political and social dynamics among and between these different beings, and the sometimes difficult-for-me-to-discern logic of the worldbuilding. But before I get to that last point, let me detail some of the things I enjoyed most about the book.

As a reader who is always hoping for less obvious moral polarities in Romance, I really appreciated the fact that the mage, who are supposed to be protecting humans from demons, are not necessarily all that noble, while the demons, who are cast in the traditional roles of villain ("fiends"), are not necessarily evil or dangerous to humans. The strict territorialities and downright medieval structures of power and authority theoretically keep a check on both the mage and the demons. Durian is technically the book's hero, but he is a dark figure, both in appearance and in personal history. He is personal assassin of a powerful demon warlord and a former mageheld who is now free following an incredibly risky and painful ritual. And the mage, who are supposedly stewards of humanity, also need humans to extend their lifespan and power:

"Christophe likes to go on about how dangerous the fiends are." She took a step closer. "If you ask me, the magekind are just as dangerous. More, because you seem to think you have some kind of holy call that makes it all right to do whatever you want." She gestured at his magehelds with a movement of such ineffable grace that even Durian was arrested. "Slaves, Leonidas? What's just or right about that?" Her quiet voice gave her words power. "How long have you bee alive? How many lives have you taken so you could live another year? How long since the kin were more of a threat to you than humans are to themselves?"

Gray is also a complex character. A former ballerina, she had been involved with a demon, a mageheld of Christophe's, and while it is unclear what, precisely, the nature of her feelings toward him were (ambivalent at the very least), she endures and participates in some truly unpleasant and objectionable things in an attempt to protect her sister (who was a witch involved with Christophe) and herself. Tough but not hard, somewhat unconventional in appearance (chopped black hair dyed bright red, skull belly bar, etc.), and willing to do whatever she needs to do to avenge her sister and kill Christophe — a woman who had "made peace with death some time ago." She and Durian share a connection that is deeper than what either had experienced in the past, partially bolstered by their shared magic, and partly by the mutual acceptance that comes from being a survivor.

Because Gray and Durian so quickly forge a bond, the reader can focus on the difficult investigation, training, and strategizing that must take place, and it is very easy to root for Gray and her justified hatred of Christophe. I liked her very much, and while Durian was a murkier character to me (in some ways he was the typical paranormal hero – tall, dark, handsome, brooding mega-rich, older than the hills but young in appearance, fastidious dresser), I came to appreciate Gray more through his own admiration for her courage and strength.

Where I got hung up was first on the romance itself, and even more generally on the ontology of the novel's paranormal world. In terms of the romance, as much as I appreciated the psychic connections Gray and Durian experienced, I still didn't quite understand Durian's rapid insistence that Gray was the first woman who really moved him:

He was feeling a little lost. He considered himself an experienced lover. He'd certainly taken his share of women to bed, but he didn't know what to do about Gray. No relationship he'd had in the past put him at risk of anything but the possibility of bad sex.

Not that I doubt the bonds of kinship they share, and the various powers of those connections, but there is also a genre trope here – the devastatingly handsome, dark, centuries-old guy who has never met a woman like the heroine in all his eons on earth – that nagged at me throughout the book. I don't know what the precise word count of the novel is, but there are so many layers here that the romance felt a little rushed for me, even though I liked that it wasn't simply the, "oh, she's so beautiful and strong: oh, he's so dark and handsome' dynamic.

Some of my frustration with this may be coming from my lingering confusion around some of the worldbuilding. Despite the short glossary at the front of the novel and the narrative explanations in the first few chapters, I still don't fully understand the foundational principles of the magic. Are we talking different species here with demons and mages and humans, and if so, how could Gray, a human, have developed magic she previously did not have? Can all humans become similarly gifted (apparently what happened to Gray has never happened before, but Gray is also unusual even for the Kin)? Is there a creation myth that explains where everyone came from and what (if any) their cosmic purpose is?

There are a lot of interesting phenomena in the book, like blood twins, which are demons bonded through some kind of shared magic. It's a fascinating state, because the bonding creates a sort of dual consciousness, but despite the ceremony being detailed at one point, I still don't completely understand all the rules around how these links are forged (and why, beyond doubling up the pair's power), how they can be severed, and what the existential differences between that state and the mageheld state are. More generally, I wasn't sure whether the kind of magic the demons have is of a similar character as the magic mages have, and if not, what the substantive differences are (and where they came from). It's not that the book lacked details – it's more that the details that were presented often raised more questions than were answered. And even as I appreciated the in medias res approach to the realms of magic, I also felt disconnected at certain points in the novel when the magical elements were the most present.

For example, one of the most powerful scenes for me in the book is also the most curious to me. It involves Durian and Gray and another old, powerful demon who interrupts Durian and Gray during a romantic moment. Instead of walking out of the room, the other demon initiates an intimate exchange of blood and connection among the three of them, which does not progress much sexually but which hints at fascinating facets to the bonds of kinship that I wish were further developed in the novel. It was a deeply intense but also somewhat unsatisfying scene, because it made me feel I was on the edge of an understanding that ultimately eluded me.

With the more traditional romance, suspense, and quest threads of the novel, there just doesn't seem to be enough room to have it all fleshed out. As I said earlier, this may very well be my fault for not being smart enough to comprehend the worldbuilding or informed enough with background from the first two books in the series, but either way the questions kept me from completely engaging in the book despite my clear enjoyment of the characters, themes, and plot. While certainly not an average read, My Immortal Assassin did not have my full, uncritical attention, either. I would, though like to go back and read the first books in the series before the next book comes out this summer. B-