REVIEW: Murder on the Mountain by Jamie Fessenden 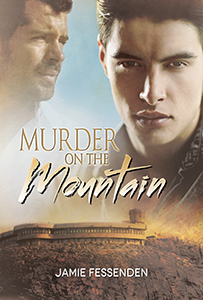 When Jesse Morales, a recent college grad who aspires to be a mystery writer, volunteers to work on the summit of Mt. Washington for a week, he expects to work hard. What he doesn’t expect is to find a corpse in the fog, lying among the rocks, his head crushed. The dead man turns out to be a young tourist named Stuart Warren, who strayed from his friends while visiting the mountain.
Kyle Dubois, a widowed state police detective, is called to the scene in the middle of the night, along with his partner, Wesley Roberts. Kyle and Jesse are instantly drawn to one another, except Jesse’s fascination with murder mysteries makes it difficult for Kyle to take the young man seriously. But Jesse finds a way to make himself invaluable to the detective by checking into the hotel where the victim’s friends and family are staying and infiltrating their circle. Soon, he is learning things that could very well solve the case—or get him killed.

I really liked your earlier works, but then your books started cranking up more and more angst and I parted ways with them. I was intrigued, however, when I saw that you wrote a mystery, and book buddy from the discussion board I frequent was kind enough to loan this book to me. I decided to review it at DA as well. The blurb describes very well how our main characters meet. Jesse discovers the body of the victim, Kyle and his partner arrive to investigate the murder. Eventually Jesse becomes a helper of sorts and he and Kyle are almost instantly attracted to each other. The book is first and foremost a mystery, romance (or should I say the beginning of romance?) is more of a secondary storyline, but it is visible in the story and I want to talk about it first.

I think that I liked it well enough. I mean the attraction was very fast, true – but I do not necessarily see anything strange about two people finding each other attractive right away and even though I usually prefer slow burn romance, I was more forgiving here because the book is mostly a mystery. I am not sure about “I love you” that fast, but at least they did not decide to move in or get married right away. Kyle is portrayed as a bisexual character which I appreciated very much – and no, the reader does not need to read that he is bisexual between the lines. Kyle clearly identifies as such and actually says the word. Of course his wife is dead, but he is very clear about the fact that he both loved her (as in he was “in love” with her) and always fantasized about men and his wife knew about his fantasies and found them sexy. Kyle never acted on his fantasies though, not till he meets Jesse when five years have passed since his wife’s death. It is also made clear that even if his romance with Jesse will work out, his attraction to women is a part of him.

I was not sure about the fact that the guys say “I love you” knowing each other for only three days, especially when Kyle has never before pursued a relationship with a guy. My interpretation was that both guys felt strongly about each other and felt that it was something worth pursuing, but the possibility that Kyle was in awe of the first guy he met was also raised. In other words, for me it worked as the beginning of a romance, which, may or may not work out.

I also thought that the mystery was really well crafted – I mean of course we have a civilian interfering in the investigation, but this version of the genre requires an amateur sleuth and at least the issue is addressed, and multiple times at that. Kyle is constantly worried about how much he should satisfy Jesse’s curiosity and, how much he should allow Jesse to get himself in danger and he knows he is being unprofessional. But Kyle also realizes that there is also only so much he can do if Jesse is persistent in getting himself in danger. In addition, Jesse actually manages to be helpful with some of the information he discovered. I can suspend disbelief when the issue is not being ignored and I liked the additional smacking Kyle’s partner delivered. And even at the end, Jesse checks with Kyle before he takes action, and Kyle realizes fast enough that this was too dangerous for Jesse. I liked how the demands of the story were balanced with believability.

And I actually did not guess the motive – *at all*. Of course the suspects were limited, clues were provided, and they all had motive, but I did not guess the real motive and when it was revealed, it was so heartbreakingly sad.