REVIEW: Murder on the Last Frontier by Cathy Pegau 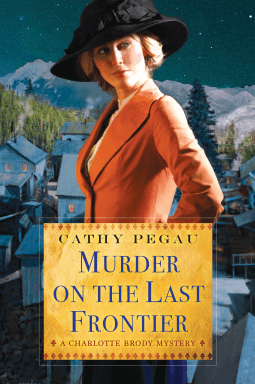 There’s many who feel the Alaska Territory is no place for a woman on her own. But Charlotte Brody, suffragette and journalist, has never let public opinion dictate her life choices. She’s come to the frontier town of Cordova, where her brother Michael practices medicine, for the same reason many come to Alaska—to start over.

Cordova is gradually getting civilized, but the town is still rougher than Charlotte imagined. And when a local prostitute—one of the working girls her brother has been treating—is found brutally murdered, Charlotte learns firsthand how rough the frontier can be. Although the town may not consider the murder of a prostitute worthy of investigation, Charlotte’s feminist beliefs motivate her to seek justice for the woman. And there’s something else—the woman was hiding a secret, one that reminds Charlotte of her own painful past.

As Charlotte searches for answers, she soon finds her own life in danger from a cold-blooded killer desperate to keep dark secrets from seeing the light of day…

I haven’t forgotten I need to finish your SFR trilogy but when I saw this historical setting, which setting and era it is and the (I’m so shallow) gorgeous cover, I hurried to request it from Netgalley.

He’s a doctor who’s dealt with PTSD from WWI and suffered due to his concern about his patients. She is journalist who has written on suffrage movement, Volstead Act and other timely issues. Now both on the last frontier and Charlotte isn’t about to tell her brother Michael about all she’s been up to lately. She can protect herself from the attentions of the men for unattached women in Alaska. Can she protect herself from murder? Charlotte’s stay in Cordova gets off to a disturbing start as she learns first that her brother hasn’t mentioned his engagement to a local young woman – something that will set their parents into a tizzy to discover – and secondly when a young “sporting girl” is killed just beyond the boarding house where Charlotte is living.

Charlotte finagles her way into being present for the autopsy her brother does (TRIGGER WARNING for squeamish stomachs). It’s fairly obvious why the woman suffered the specific injuries she did before death. What I suspected about Charlotte seemed to be true. Second TRIGGER WARNING to reinforce the first warning here. Seriously, I mean it. While the scene gives lots of clues, it also reinforces the bond between brother and sister. Charlotte finds it binds her to the dead young prostitute as well though she’d never tell her brother that. Journalist instincts awakened, she knows she has to help find justice for Darcy.

The prostitute was pregnant at the time she was murdered. Her injuries are such that the killer must have known of her condition and beat her in a specific way which indicates extreme rage about her condition.

Charlotte miraculously seems to be in the right places at the right times to learn more about the crime and the possible criminals. Much as her brother might wish, she’s not going to stay out of the investigation. Well, she hardly could given how much she sees and hears without even trying. She’s also not afraid to speak up for the dead and to make her views known about the lack of Christian charity being expressed about her. Charlotte definitely doesn’t hesitate to ruffle some feathers when she feels it’s needed.

Charlotte is discovering that Michael has changed a little. Or maybe she doesn’t know him as well as she thought. Why is he going to marry slightly sanctimonious Ruth, the minister‘s daughter? Their family has never been overly religious. And is he really going to slip into the social climbing, public appearances, taking care of a more wealthy clientele when their parents raised both of them to give back and help the less fortunate? Charlotte is frankly stunned and wonders if a doctor who cares as much for his patients as her brother does will be happy and able to slough them off to the newbie. Where did her beloved brother go and who is this almost stranger in his place? There are things beyond the murder that Charlotte needs to work out while in Cordova. I appreciated the depiction of their relationship – it’s not always tranquil or easy but that’s much like real siblings having secrets, changed lives and issues that weigh on them that change their lives.

James, the Deputy Marshall also isn’t best pleased with Charlotte poking her nose into investigation. It’s an open one and he needs to be the one leading it. She’s also announced to quite a few people what she’s doing and this is a small town which is of course gossiping about what’s going on – meaning the murderer will probably know now too. Ooops. Still Charlotte can’t let this go. Her connection to the dead woman and the need to see justice done for her when few others care at all that she died, much less so horribly, rides Charlotte. The mystery deepens when a clue turns up which might incriminate a prominent resident of Cordova.

As Charlotte continues her series of articles to show the viewpoint of women in Alaska, she silently admits to herself that she’s there to do that and also maybe reinvent herself, like so many others who’ve chosen to go there. To put her past behind her.

The case is certainly getting Charlotte to spend time with the deputy Marshall, as much as he initially held back. Charlotte gets to discover that James has a quiet, droll sense of humor and a very nice smile. There are lots of clues and red herrings here. Lots of atmosphere too which is all well done. Little details shade in the era and the characterization is subtle but memorable. When the loose threads of the investigation begin to be pulled tight – audaciously by Charlotte – things heat up quickly.

When Charlotte kicks the hornet’s nest, and she almost surprises herself that she did but her “gut” told her the time was ripe, I wondered did she not expect some retaliation? After all, she said it had happened before because of controversial articles she’d written. And she digs in her heels and drags her feet over telling James what she did. I’d had inklings of suspicion about one person but it isn’t until the end when the klaxon warnings starting going off in my head and by then the betraying actions were clear enough put together with some remembered clues. The villain exposition clenches it in dramatic style.

The mystery wasn’t too easy to solve though a feint of hand thread got wrapped up at the end a bit messily. At least the guilty didn’t come “out of the blue.” There’s a relationship to explore and another to mended plus an interesting budding friendship I actually admire Charlotte for seeking out. I enjoyed the atmospheric setting and that Charlotte doesn’t let people dictate to her – though perhaps her most recent experience will remind her that if the deputy Marshall is getting exasperated with her over butting into a case, maybe he’s got a reason and a point. But given Charlotte’s stubbornness and independence, I happily have my doubts. B-