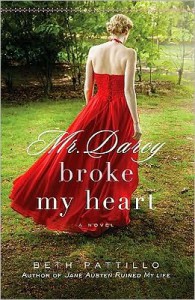 I’d call this book a loose sequel to last year’s “Jane Austen Ruined My Life.” It’s not necessary to have read that one to jump right into “Mr. Darcy Broke My Heart.” I also love that while you take advantage of the current “Austen craze,” this book isn’t one of the many books out there that seek to take Austen’s secondary characters and write HEA novels for them.

Claire Prescott is a sensible woman who believes in facts and figures, not fairy tales. But when she agrees to present a paper to a summer symposium at Oxford on her ailing sister’s behalf, Claire finds herself thrown into an adventure with a gaggle of Jane Austen-loving women all on the lookout for their Mr. Darcy. Claire isn’t looking for Mr. Anyone. She’s been dating Neil — a nice if a bit negligent — sports fanatic. But when a tall, dark and dashing stranger crosses her path, will the staid Claire suddenly discover her inner romantic heroine?
Her chance meeting with a mysterious woman who claims to have an early version of Austen’s Pride and Prejudice — in which Lizzie ends up with someone other than Fitzwilliam Darcy — leads to an astounding discovery about the venerated author’s own struggle to find the right hero for Lizzie Bennett. Neil’s unexpected arrival in Oxford complicates Claire’s journey to finding her own romantic lead. Mr. Darcy Broke My Heart is the story of a woman who finds that love isn’t logical and that a true hero can appear in the most unexpected of places.

As I read the book, I couldn’t help but get frustrated at times with Claire. Just as frustrated as those who love her probably feel about how she’s put off her own life to do for them. This book is more, I think, women’s fiction with a romance at the end than a romance. It’s told in 1st person POV and deals more with Claire and her journey to understanding herself and what she’s done with and allowed to happen in her life. It packs a lot of change and self examination into a weeks time.

As with the first book, I just accepted the Formidables. But the thought of a hidden Austen manuscript would be tantalizing. I like the bits and pieces of the version of “First Impressions” you’ve created and think it makes sense given what little I know of Austen’s life. We see what could have been the outcome of Jane examining her own life and the people in it, just as Claire does. And how that could have changed what is probably her most widely read book, “Pride and Prejudice.”

There is a romance here and as with the previous book in this series, “Jane Austen Ruined My Life,” the heroine has to deal with two men in her life. Who are they both and what does each want from her? Claire has to determine that, and learn her own heart, before the end of the story. Part of my difficulty with the book is that since it’s from Claire’s POV, all we know is what she has figured out or thinks she knows. It’s not until late in the story that we learn more about both men, which helps to illuminate who they truly are and what they feel for Claire. I was willing to keep reading because watching Claire come to self realization caught my attention. She’s a flawed person but then aren’t we all? She doesn’t come to immediate self knowledge and fights what she discovers about herself along the way. And who doesn’t do that too? After she finally figures it all out, though, I’m glad that she’s going to wait almost another year before tying the knot. I think settling into her new relationship needs a little time.

You did have me guessing about who she’d end up with. It swung back and forth, chapter to chapter and even within chapters. I was even to the point of thinking that she’d not end up with anyone but perhaps take more time to find out what she really wants from life before looking for a relationship. And honestly, I think I would have been fine with that too. I do like her choice because who doesn’t want a hero like that?

But even as you kept me guessing about Claire’s ultimate hero, I discovered that I don’t care for books which make me guess. Love triangles have rarely been my reading choice and I think I know why. I want to know who the hero and heroine are going to be and not be pulled back and forth over the course of the book as to which person another ends up with. Sure, I want to watch a couple work out their relationship but I want to know who I’m supposed to cheer for. Here, the information needed to see who would be the hero seemed to come from left field.

I do like the way you’ve woven Austen and her books into these stories as it’s more unique than just another rehash of the characters she left without HEAs. In the end, my grade is based, somewhat, on what is my own personal dislike of love triangles. I think that people who don’t mind these will ultimately enjoy the book more than I did. B-

~Jayne
This book can be purchased at Amazon