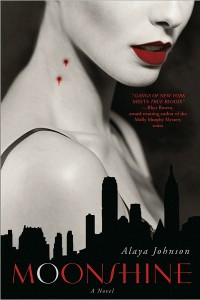 I’ve made no secret of my general malaise when it comes to the urban fantasy genre. I overloaded on it during its boom period, and I still don’t think I’ve entirely recovered. That said, I’m always willing to give a book a chance, especially when it tries to do something different with the subgenre. After hearing that your novel was set in Prohibition era New York City, I decided that was the kind of different I was looking for.

Zephyr Hollis comes from a family of demon hunters. Her father, in fact, is the best demon hunter in all of Montana. But after deciding the family business was not for her, Zephyr heads east to the big city. In New York City, she’s gained the reputation of being a bit of social crusader; her nickname is the vampire suffragette. It seems Zephyr feels a little guilty for all that hunting she used to do in her past and hopes to make amends.

In this Prohibition era NYC, Others (supernatural beings) face persecution along the lines of those experienced by minorities at the time. I especially liked this element of the novel because there was a large overlap between the vampire and immigrant populations. It makes sense from a worldbuilding standpoint that the most vulnerable segments of society would be the ones most likely to fall prey to vampires. Zephyr, however, has made it one of her life’s missions to work for their benefit. In addition to attending activist meetings and public protests, she also teaches night classes to Others and immigrants alike.

One of her students is the very tempting Amir, who is an Other but not one that Zephyr immediately recognizes. But in addition to being the expected love interest, he also asks her to track down the true identity of the vampire crime boss, Rinaldo. Because in addition to be a former vampire hunter turned social reformer, Zephyr has a bit of special ability: she’s immune to vampire bites. No matter how many times she gets bitten, she doesn’t change.

As you can probably guess, the best parts of the novel for me were those dealing with the class and race issues. Moonshine is not anachronistic. Readers will encounter the perspectives and opinions they’d expect of the time period but filtered through Zephyr’s POV, they are never presented as acceptable. We see this play out in two of Zephyr’s relationships: her romantic one with Amir, and her almost-friendship with Lily.

Speaking of the latter, I loved the portrayal of female relationships in this novel. They were never one-note or token. From the contentious relationship with her landlady to the almost-sisterly one with her roommate Aileen, we get to see the full gamut. My favorite relationship, no surprise, was that with Lily. Seeing lower class country girl Zephyr have to work with a socialite reporter was great. I actually wouldn’t mind a book about Lily, to be honest. If there’s a story in why Zephyr became a social reformer for Others’ rights despite her background, then there’s definitely a story in why a socialite from a wealthy family became a reporter.

I admit I’m lukewarm on the romance subplot with Amir. I liked the fact that he wasn’t a vampire, or even a werewolf, but it didn’t do much for me. Part of me felt like it was there because it’s expected of the genre. On the other hand, I did appreciate the fact that you did not shy away from the fact that, as an Other, Amir lives on a different time scale from humans and has a different set of values from humans. He is not a human in a monster’s suit. He is an Other to the core, and the ending does not gloss over that. This may be disappointing to readers who prefer a neater ending, but it is a more realistic take that at least acknowledges the implications of being a supernatural creature. (I’m deliberately vague about what Amir is. It’s not quite a spoiler because there are hints early on in the novel but if readers would like to know right now, check the tags as always.)

Zephyr’s family was charming, to the point that I wish we could have seen more of them. I thought the scenes in which they were on-page were gold, personally, but I’m also a sucker for family dynamics and interactions. It was definitely refreshing to have Zephyr’s family still love and adore her even though she became something of a black sheep.

Overall, I’m glad I broke out of my longstanding urban fantasy funk to give your novel a try. The setting was different enough to keep it fresh while I also think the structure is familiar enough for diehard urban fantasy fans to enjoy. I don’t know if you intend to write more novels along this vein, but I’d certainly be up for them. B-