I first stumbled across your novel on NetGalley. It didn’t sound like my thing at first. It’s young adult urban fantasy and I’m reaching my limit on those. It features a teenage outcast and that didn’t strike me as anything new. I do like demons, but they’re becoming a worn out staple in YA urban fantasy. But then I realized your protagonist knew she was part-demon who didn’t take it seriously and that her father was an ex-priest. That piqued my interest because you don’t see that angle explored a lot. 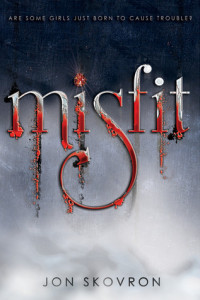 Jael Thompson has spent most of her short life bouncing from place to place. The daughter of an ex-priest, her father makes it a point to move every couple years. That sort of lifestyle doesn’t allow much time to make friends or put down roots. As for why Jael and her father move around a lot, it turns out she’s half-demon and many people (and things) are out to kill her.

Jael’s father has successfully kept their small family one step ahead of their pursuers for her entire life. That all changes on Jael’s sixteenth birthday when he gives her a present left behind by her deceased, and demonic, mother. Suddenly hiding becomes a lot more difficult as Jael comes into her powers granted by the other half of her heritage.

I was pleasantly surprised by this book. You know how it is. You read enough YA urban fantasies and you start noticing patterns. Plots start becoming predictable. Things just don’t seem interesting anymore. But Misfit veered slightly off the well-beaten path. It wasn’t completely new but it was fresh enough to keep me engaged.

The aspect I liked best was the worldbuilding. (Are my fantasy reader roots showing or what?) The concept of old gods becoming demons was interesting. After all, that’s essentially what happened in reality. The rise of Catholicism led to all manner of beliefs being vilified and subsumed into the religion. So when your novel took this idea and ran with it, I was charmed. From the goddess Astarte also being known as Lilith or the Babylonian god Dagon eventually becoming the fish monster out of H.P. Lovecraft’s works, I had a fun time trying to find the connections.

The idea of gods changing with the times and being influenced by the belief of humans isn’t a new one. Many novels, such as Neil Gaiman’s American Gods, have already done this. But seeing them tied together and being acknowledged as the same thing like this was something I found interesting.

The way the book kept the cosmology multicultural was something I appreciated. Even though Astarte would later become Aphrodite via the Greeks, your novel didn’t make her the blue-eyed blonde we’ve seen in so many depictions. She’s explicitly described as having Middle Eastern features, looks that she passed on to her daughter, Jael. The fact that gods of other cultures were present and acknowledged helped build a global feel to your story. I like that. Too often I feel like books box themselves in, depending on one narrow portrayal to describe a particular mythology. This avoids that, and I liked it.

I found Jael to be a great heroine. Her relationship with her father is contentious but believable. Paul’s treatment of Jael isn’t always (or ever) fair but it’s understandable. He’s a former priest who tested and lost his faith and fell in love with a woman he shouldn’t have. Now he has a half-demon daughter he’s trying to keep alive even though the demon that killed her mother is hounding them all over the world. That would make me paranoid and suspicious of anyone and everyone. It doesn’t make him the greatest father but it does make him relateable as a man trying to do his best to raise his daughter. It’s just that to him raising his daughter means keeping her alive, not necessarily keeping her happy.

But I also think that relationship helped keep Jael real and grounded in the face of her otherworldly powers. When she comes into her demonic powers, she inadvertently becomes the It Girl. Remember, her mother was Astarte/Aphrodite/Lilith and other such mythological femme fatales:

Jael looks up. A big jock stands at their table.

“Yeah?” she says, biting into her second apple.

“Uh…” He looks like he’s trying very hard to be cool. “You, uh, doing anything tonight?”

She stares at him for a moment, totally incredulous. Then she says, “Get lost,” and goes back to her apple.

“Uh…” he says, like he doesn’t quite believe what he’s just heard.

He wanders off, looking bewildered.

“Actually, I’m pretty sure those are the three things I don’t need.”

I also thought that the identity of the antagonist was obvious. I realize Jael probably would have no reason to figure it out herself, based on the information she had, but I’ve always been the type of reader who prefers to figure out plot twists near the same time as the narrator. It pains me when I figure it out well ahead of the protagonist.

All in all, this turned out to be a fun read. Fast-paced with less emphasis on introspection and mooning over the love interest. There were some sections that were a little confusing, such as Jael’s tour of Hell, but overall I thought the ideas introduced by the worldbuilding made up for it. Jael’s victory at the end seemed a little easy but the cost balanced that out, in my opinion. I’m afraid to check to see if there’s a sequel, but I think this book works as a standalone. The best part? Even though Jael has a love interest, the narrative remains solely about her and his role in the book is to support her. How refreshing is that? B-