I confess that I didn’t intend to read this series, ever. First, the covers are generic man titty. Second, it’s generic mantitty on top of generic paranormal and frankly I am a little worn out by both tropes, overused by the romance genre. Yet, your name kept popping up as someone who has been around for a while writing paranormals before paranormals were even considered a romance trope, let alone an overused one. What really sold me was that someone told me that this series was a police procedure series. I love police procedure books. They appeal to the facts + law side of me. 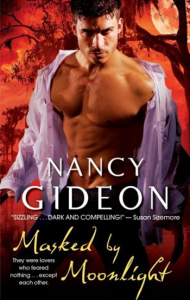 The book starts out snappy with New Orleans homicide detective, Charlotte Caissie, arriving to investigate the remains of two victims who appear to have been torn apart by an animal. The victims were connected to a major crime lord, Jimmy Legere. Jimmy Legere has played a major role in Charlotte’s life and she’s devoted her entire career to bringing him down. She knows he has a hand in the deaths of these two low level gamblers, but she’s not sure how and whether this will be his downfall.

Max Savoie is known as Jimmy’s guard dog and that’s about it. He had no past, no record. He doesn’t exist according to all data that Charlotte (or CeeCee) has available to her. But when he is around, there is always a hum of attraction between them.

And he missed nothing when it came to her-‘not the slightest nuance, every tiny alteration, in a way that she'd find alarmingly obsessive if he ever acted on it with more than slightly flirtatious words. Who the hell noticed a new perfume applied modestly to pulse points almost a full day ago? Wondering made those pulse points flutter.

Max is an interesting character. He’s the more complex of the two. While having all the accoutrements of the alpha male-strength, power of personality, swagger – he is not the alpha male in this book. Jimmy Legere is his alpha, not in the werewolf sense, but in every other sense. When Jimmy says jump, Max jumps as high as possible. There is a really evocative scene where Jimmy is wondering about Max’s loyalty when Max begins to show his feelings for CeeCee. Max steps on some pictures and grabs the gun that Jimmy, a man wheelchair bound, keeps near him at all times. Max places this gun on his adam’s apple and says that Jimmy should pull the trigger right then and there if Jimmy has any doubt to whom Max belongs.

Max is torn so completely between his devotion to Jimmy, someone who has cared for him, provided for him, made him feel loved, and his growing and undeniable feelings for CeeCee. Max is a curious mix of suave seductor and frightened boy.

While CeeCee has a good conflict on paper–Max is on the wrong side of the law and she upholds the right side–it is not compelling as Max’s storyline. Not enough was done to make CeeCee the complicated character she could have been. Her conflict, to a great degree, existed solely to make it impossible for her to be with Max. It didn’t have a growth arc like Max’s did. Thus, when CeeCee resisted Max, it seemed contrived at times and I felt impatient with her, particularly when most of her resistance was after some heavy duty giving in.

UPDATED: As I as thinking about this review, I felt like I should add that CeeCee betrays Max more than once in pursuit of her justice and while this might seem offputting (and it was) I felt it was justified given her past though I thought a better job could have been done showing the horrors of the past so we could understand the depths of CeeCee’s struggle.

About halfway through the story, the conflict changes quite a bit and the obstacles between the two become larger as Max takes on more responsibility for a criminal empire CeeCee wants to destroy and as Max becomes a main suspect for the murders of the two victims.

Coupled with this is the supernatural overlay. Max is a shapeshifter who has no knowledge of the extent of his power and his abilities. Part of the mystery is what exactly Max is and who else know what he is.

There are some major holes in the story. Like, why is this the first time that the police have ever discovered victims killed like these if Max has been Legere’s enforcer for years? Also, while the police procedure starts out strong, it kind of loses steam about half way. (This becomes increasingly problematic in subsequent books). However, the strength of Max’s storyline made this book compelling enough for me to buy the second book in the series. B-