REVIEW: Make Me by Tessa Bailey 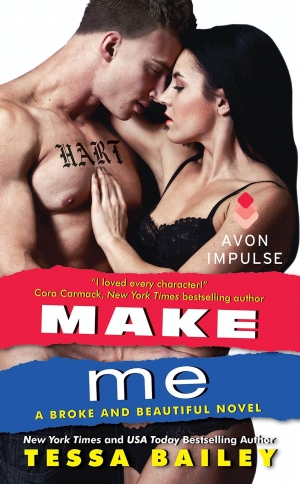 I don’t know of another author that does steamy scenes as well as you do. This is the third in the Broke and Beautiful series. I read the first one and don’t really have any good excuse for why I skipped the second. The first one was a good read with a really abrupt ending. This one has the same feel good romance with a more fleshed out ending. The sole problem is that the conflict is fairly simple and at times felt unnecessarily dragged out. But, then, if the conflict didn’t exist the book would have been over after the first chapter.

Russell owns a small construction firm and he’s angling to expand even if it means dragging his somewhat lazy brother along with him. Russell’s motivating factor is that he is in love with Abby, a very wealthy young woman. Maybe he wouldn’t feel so threatened by Abby’s financial condition if it hadn’t been for the dysfunctional relationship of his parents. His father lost the ability to support his mother in a way she thought was appropriate which led to fights, his mother cheating on his father, and his father’s sad decline.

He’s determined not to make the same mistakes which is, of course, admirable. However, Abby isn’t this stuck up high society princess. Yes, she works at a hedge fund (her father’s), but she comes off as an ordinary, unspoiled, hard working woman. Russell’s failure to see that was frustrating at times. At one point, he realizes how tired Abby is from all the hours she is working and wonders how he has missed it.

Myopia isn’t one sided though. Abby doesn’t even realize Russell has been pining over her and protecting her in dozens of small ways. Everyone sees it but her. It takes seeing Russell without a shirt on for her to realize that he’s attractive. This required some leap of faith. It’s not that I don’t think men and women can’t be friends but Abby and Russell are around each other with great frequency since their two best friends are now couples. I believe I’m supposed to chalk this up to Abby’s general cluelessness in life. She had to literally buy her female friends by subleasing her apartment at a ridiculously low rental rate and most of her time is spent covering for her father, the head of the billion dollar hedge fund, who had a complete breakdown and can’t make any decision more taxing than what newspaper crossword puzzle to play.

Russell’s goal in life is to make sure that Abby doesn’t even have a hangnail. He thinks that all women should be wearing flats–for their own safety. “Good God, the amount of shit these girls carried around in their purses. After he succeeded in getting them all to wear flats, downsized purses would be his next quest.”  Russell’s caveman mentality was adorable but I can see where it would bleed over the line into irritating for some. It came from a place of genuine goodheartedness and I couldn’t ever fault him for that.

But Russell’s behavior falls into the “I know better than you” category which, I suppose, is sold as a natural extension of his overly protective instincts when it came to Abby. He snaps off the heels of her shoes when she stumbles so he’s going to try to prevent her from falling for him. But he does so, not out of thoughtfulness toward Abby, but out of his own sense of self preservation. He doesn’t think he’s good enough for Abby…yet. But she comes from a financial stratosphere so high that he could never be “good enough” in that sense.

I did like how it was resolved–both with Abby’s dilemma and between Russell and Abby. There are some reviews that said he needed to grovel more and I can see that. For me, I was satisfied, particularly because I liked both of the characters so much. Abby was good at her job and her personal conflict had less to do with being the right girl for Russell (although she did have internal qualms about her lack of experience) but figuring out how she was going to extricate herself from the financial mess that her father had placed her in.

There were lots of references to past interactions between Abby and Russell and those would have been nice to have seen. I think it would have added fullness to their relationship. However for a quick romantic read with plenty of sizzle, Make Me delivers. B-