REVIEW: Mad About the Man (The Graysons #3) by Tracy Anne Warren 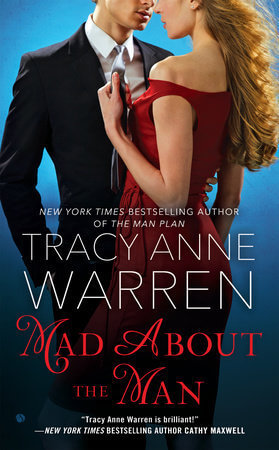 Poor Brie. She thinks she has it bad after being named after cheese, and now things have just gotten a whole lot worse. While playing tennis with her colleagues, she catches a glimpse of her firm’s dream ‘get’. Coincidentally, he shares his name with Brie’s tormentor from her schooldays. Wait…you don’t think it could be…Oh my God. it’s the same guy! Brie responds rationally and maturely to this development and lobs a tennis ball right at his stupid poopy face.

As Maddox (for that is Poopy Face’s name) is a romance hero, he doesn’t respond by suing her cheddar-y face off. He instead hires her law firm, insists she gets a promotion and declares that he shall deal only with her when it comes to his legal dealings.

Brie is cheesed off. Where some people might react negatively to someone Federering their face with a tennis ball, Maddox is flirtatious and charming, and they embark on a wonderful affaire, full of Parmesan and Pimms. Brie is spooked by this. It’s clear her previous relationship wasn’t great, and it left her with some scars. You see, her ex used to throw tennis balls at her face too. Psychological tennis balls at her emotional face.

Maddox, in between dodging missiles thrown by his beloved and running his fancy hotels, realizes he never really got over the object of his childhood torment. Sure, he still teases her, but his feelings run deep, and while he enjoys their friends-with-benefits arrangement, he’s looking for more. Brie, however, unimpressed by Maddox’s philandering ways, and their history, is super reluctant.

This book follows the same path as the first in this series (I didn’t read the second book – the one before this one. Bad reviewer! *smacks self on nose with rolled-up newspaper* It can be read as a stand alone, however, so don’t worry about that.). Its pace is pretty leisurely, the writing is confident and smart, and the characters are likable. It isn’t a crazy, hectic ride, and you should be warned that things get heavy just before the end. Overall, it’s enjoyable and substantial, with just enough air to lighten it up… *considers joke about how it’s like a cheese soufflé but realizes the arse has well and truly been torn out of it at this stage*