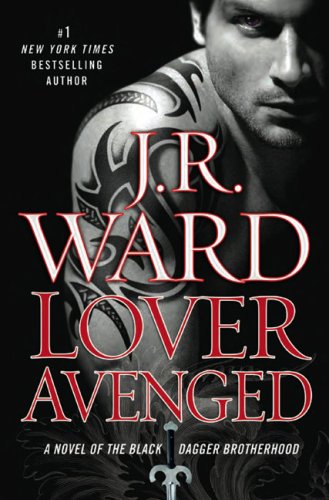 I was a relative latecomer to your Black Dagger Brotherhood Series, joining it in progress at, I believe, book three (or was it four?). Anyway, I remember reading online discussions about the series well before starting the first book, mostly related to the unusual names of the heroes (debate, IIRC, raged about whether the names were so silly as to be distracting, or not).

A friend finally convinced me that the books were addictive enough to overcome both my paranormal prejudice and the conviction that the heroes’ names were in fact just too silly to bear. I did become a devoted follower after reading the first book in the series, Wrath’s story, Dark Lover. A devoted follower, but an ambivalent one. There is a lot that I don’t like about the BDB books. Chiefly the slang, which seems increasingly ubiquitous – almost every character thinks and talks in a highly stylized and artificial way. But also the nature of the hero/heroine attachments, which are very animalistic and seem almost biologically-driven. I think the latter is probably a positive for some romance readers, those who prefer their heroes ultra-alpha. Now, it’s not like I’m looking for an Alan Alda-type “sensitive” hero (uh oh, I think I just dated myself with the Alda reference), but I do prefer my romances a little more nuanced and realistic – two words that I doubt could ever be applied to the BDB books. But they are strangely addictive books, and if I think of them like old-fashioned comic books or some other medium where the emotions and characterizations are broadly drawn, I manage to keep my irritation at the elements I don’t like to a minimum.

Lover Avenged is, of course, Rehvenge’s story. Rehvenge is the secret sympath, drug-dealing, Mohawk-sporting, club-owning brother of Bella, the heroine of Lover Awakened, who is of course the mate of Brother Zsadist, who…wait, why am I explaining this? Anyone who has read the first six books in the series already knows it; anyone who hasn’t – why are you reading this review? You’d do better to go watch a Season 5 episode of Lost; it’d be less confusing.

Anyway, Rehvenge is paired with Ehlena (is this the first sighting of a heroine with extraneous consonants in her name? I think it might be! Equality at last!), who is a nurse at Havers’ clinic. Ehlena doesn’t have much of a life; her family was shunned by the glymera, the vampire aristocracy, after her father was swindled in a business deal. Now Ehlena spends her time working or taking care of her father, whose schizophrenia manifests itself in an obsession with order and regularity. At the beginning of Lover Avenged, Ehlena is already familiar with Rehvenge as a patient of the clinic, one whom the other nurses avoid because of his menacing air. Rehvenge is attracted to Ehlena but has a serious case of I’mnotgoodenoughforheritis, plus his life is already pretty complicated, what with being a secret sympath and the fact that he’s been blackmailed over it for the past 25 years.

Ehlena is at first somewhat immune to Rehv’s dubious charms, which I appreciated (and which contradicts my earlier point about all of the pairings in the series having a biology-as-destiny view of mating). She gets closer to him, though, when she tries to help him with an infection in his arm that he seems strangely reluctant to have Havers treat. From then on, it’s pretty much true love, which runs about as smoothly as you’d expect given the obstacles I’ve already mentioned and the fact that Rehv lies to Ehlena rather a lot.

Lover Avenged is not just Rehv and Ehlena’s story though; as with previous books in the series, there are multiple storylines. We follow Wrath as he faces new challenges as the Vampire King, Tohrment as he slowly returns to the land of the living (little vampire pun there), John Matthew and Xhex as their relationship progresses and regresses, and, by far my least favorite, Lash as he combines the worst of both worlds: being a seriously obnoxious vampire and being a lesser, creatures I’ve only barely tolerated reading about in previous books. At least the previous lessers were impotent, meaning that while they were gross, creepy and unpleasant to read about, there at least was not a sexual element to their gross creepiness. No such luck with Lash, who is a truly loathsome villain. I could have done with many fewer pages spent on his thoughts and actions.

I’ve seen some readers express dismay at the numerous plots each of the BDB books holds. It doesn’t bother me so much, but it can be aggravating to keep switching scenes if one of the storylines is a lot more interesting than the others. That wasn’t really the case in Lover Avenged; I was about equally interested in the main story, John Matthew and Xhex, and Tohr. I didn’t care quite as much about Wrath, and again could have done without Lash entirely, but the book did not feel unbalanced and I wasn’t having to plow through large sections of stuff I didn’t care about to get to the good stuff.

I normally evaluate a book by looking at the plot, the characterization and the prose. That doesn’t really work with the BDB books in general or Lover Avenged in particular, because the plot is a mess, the characterization is absurd and the prose sets my teeth on edge. The fact that I still pretty much enjoy the books means that there is something else there that draws me in. I’m not sure that I can (or need to) articulate it any better other than to say that they are entertaining.

I will say that though I did not find Rehv’s and Ehlena’s relationship excessively romantic, by the climatic scene I did feel a little frisson at the thought of their HEA being in sight. (If I don’t get that feeling at some point near the end of a romance, I know it’s failed me; it means I really just don’t care about the characters at all.)

I’m looking forward to the next book in the series, though I’m not sure who the hero and heroine are slated to be. Possibly John Matthew and Xhex? There were definitely some interesting developments in their relationship in this book, and it ended on a cliffhanger note. I have always liked John; he actually became less likable in Lover Avenged, though I understood the reasons for the hardening of his personality. I’m a little cooler on Xhex; I don’t mind a tough heroine but her androgynous appearance is a bit of a turn-off for me. We got a little more insight into her personality in this book, and I liked what I saw. I didn’t like one instance of vigilante behavior, but that was less about the action itself and more about how graphically it was rendered. Really, Ms. Ward, I understand that subtlety is not a hallmark of these books, but sometimes less really is more. Alluding to a fairly gross and sadistic act of torture is one thing; the act did not need to be described multiple times.

That said, I’m giving Lover Avenged a B-.

This book can be purchased in hard cover from an independent bookstore or ebook format from the Sony Store and other etailers.