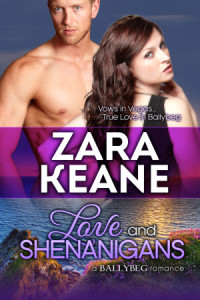 Vows in Vegas…
Three days before leaving Ireland on the adventure of a lifetime, Fiona Byrne returns to her small Irish hometown to attend the family wedding from hell. When she discovers the drunken vows she exchanged with the groom during a wild Las Vegas trip eight years previously mean they’re legally married, her future plans ricochet out of control. Can she untangle herself from the man who broke her heart so long ago? Does she even want to?

…True Love in Ballybeg.
Gavin Maguire’s life is low on drama, high on stability, and free of pets. But Gavin hadn’t reckoned on Fiona blasting back into his life and crashing his wedding. In the space of twenty-four hours, he loses a fiancée and a job, and gains a wife and a labradoodle. Can he salvage his bland-but-stable life? More importantly, can he resist losing his heart to Fiona all over again?

As is usual for me at this time of year, I’m in a desperate race to try and finish all the books I’ve put in my “TBR this year” pile. Your post to our last Author Thread reminded me I’d snagged this start to your Ballybeg series from our submissions section so I keyed it up. It’s got the typical “wedding going wrong” plot most of us have read before – obviously not to be believed in real life but in romances, they abound. While there’s nothing new here it does have a lovely Irish setting plus characters I came to care about and want to see in their HEAs.

If there’s one character type I hate to see it’s the “make nice” heroine who lets shite be dumped on her in order to keep the peace. Go Fiona and BFF Liv for standing up to Fiona’s wicked cousin – now remind me why a nice man like Gavin would marry a witch like that? – and her obvious efforts to humiliate Fiona. Oh right, Gavin has mummy issues from his childhood and is willing to settle into an established relationship with the bitc – er, witch. Again, a typical romance scenario with Gavin’s past only trotted out when needed but it sets up the rest of the book.

Dual track disasters begin to build and pick up speed for both Gavin and Fiona as the hours tick down to the wedding fiasco to come. An Elvis impersonator themed disaster paired with fluffy, bunny slippers. Reading it is like sitting in a theater, watching a comedy/horror movie and waiting for the good stuff you know is coming to start.

The best laid plans of Fiona and Gavin are soon trashed with most of the village looking on in horrified glee. There’s just enough reality mixed with OTT plus copious amounts of humor to keep me flipping pages though I will admit to a salacious desire to have been a witness to the wedding cock up. You could eat out on that for years.

With the wedding a no-go and Fiona’s plans to travel the world gone up in smoke these two have a long way to go to find their HEA. And that’s before Gavin’s drunken post ceremony ranting in the local pub. At this point I had as much sympathy for him as Fiona does – none – but then thought about his awful almost in-laws and realized the man was just anticipating the fall-out to come.

Thankfully Gavin who, once he’s not drinking to insensibility begins to notice that she’s changed over the past years, pulls himself together and along with Fiona, starts to work out how to extricate themselves from their youthful peccadillo. That event had been fueled by multiple long island ice teas, which for those who don’t know, contain beaucoup amounts alcohol and can get you shit faced in a hurry. The road from there – Vegas – to here – small town Ireland – wasn’t as torturous as I had expected. I did find it strange that back then Fiona was willing to drop everything and head to Vegas with him given how she said he’d always been condescending but teenage love and all that …

What an interesting education is delivered about Irish divorce laws. Four fecking years?? Jaysus. You’d better be sure about your HEA and no marriages of convenience there because it for sure isn’t going to be convenient to undo it.

At the mid-point in the novel, Fiona and Gavin are still having flare-ups of emotion – anger, frustration, etc about the situation. For Gavin – well his life really has gone in the crapper in terms of a now vindictive father of a jilted bride who is going to make Gavin’s professional life hell as well as dun him for half an expensive wedding that didn’t occur. For Fiona – she appears to have a long running history of being treated badly by this branch of her family on top of unrequited lust for Gavin so having her life upended this way does have to hurt.

Still the attraction is there and as someone says loud enough for an entire bookstore to hear – it’s electric. They do snog a bit then stop. But since the last time they had wild monk sex was when they were plastered in Vegas, it’s reassuring that this time they stop, ask and make sure each wants this before knocking the cottage off its foundation. That is after Fiona demanded and got a “show” from Gavin before she’d do more than remove her shirt. If he wants the bra off, he’s got to put out for it. Fiona does have a lovely sense of humor and Gavin’s more than willing.

I was happy that the Irish dialect was well done and depended on word selection and arrangement instead of faux abbreviations. Some of the few spelling changes are the lovely word eejit and the change to fecking. No O’Lassieland here.

As the story progressed and all the cards were revealed, I could kind of tell where it was all headed and how things would be wrapped up. Of course the exact journey there and the stops along the way might deviate a little but I didn’t see that any major surprises would pop up. Fiona does display some of her new agency in dictating the terms that will set things right and Gavin comes through with a romantic proposal to forget pursuing a divorce – four years to get one?! I’m still amazed at that. After this start, I’ll definitely be continuing with the Ballybeg series. B-