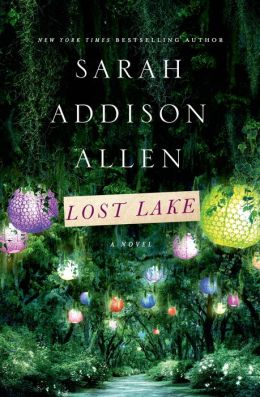 I am a huge fan. There’s just no use starting out with any other introduction than that. A clever friend gifted me a copy of Garden Spells several years ago, and it was love at first sight. I quickly devoured each of your successive books, and while I can never quite decide if The Peach Keeper is my favorite or if The Sugar Queen owns that spot, what I do know is I have loved each one of your beautiful stories. So it was with great pleasure I sat down with this latest blend of magical realism and southern comfort. As a child, I spent several formative years in Virginia. My mother’s sister and her family lived a few hours away in North Carolina, and every spring and summer we eagerly climbed in the car and drove south to spend a few weeks with them. These trips were magical to me, and these novels, with their humid nights, slow-roasting barbecue, and softly lilting drawl send me right back to night games with my cousins and catching fireflies in cupped hands.

Eby Pim never expected to marry the man she did. Coming as she does from a long line of women determined to marry money, Eby was always the sad exception to the rule. Less lovely, less ambitious than her mother, sister, grandmother, she was perhaps the most surprised of all when she and George fell in love. He was rich. But the money was new and meant very little to either of them except as an escape from their interfering families. And so Eby and George embarked on an indefinite honeymoon, spending months and months in Europe. Paris, mostly, where they acquired a troubled young woman by the name of Lisette. Lisette never speaks, preferring to write her thoughts and questions down on a notebook she keeps around her neck. When word of a death in the family cuts their time in Europe short, Eby and George return home to Georgia with Lisette in tow. And when the lure of their money proves too much for Eby’s family, they decide to wash their hands of it, getting rid of it all and buying a stretch of land known as Lost Lake, where they set up a small summer resort amid the swamps and cypress knees. Years later, Eby’s widowed niece Kate finds her way back to Lost Lake. She brings with her her free spirited 8-year-old daughter Devin and a fledgling determination to take up and make some sense of the scattered threads of her life.

Lost Lake is very pleasant. It is a very pleasant novel. And there’s the rub. Pleasantness abounds, along with a very nice level of quirk and charm. But it never crosses over into deeper waters, at least not for me. Most of Ms. Allen’s novels trade point of view chapters back and forth between a couple or three “main” protagonists. Sometimes I gravitate more toward one than the others, and sometimes I fall for them equally. Either way the overall balance generally works for me. But in Lost Lake, quite a few different characters share the limelight (what there is of it), and I was never allowed to spend enough time with any one of them to develop genuine feelings for them and their fate. I wanted to. The chapters from Eby’s past are heady and lovely. I followed her through the streets and over the bridges of Paris and would have happily spent the rest of the novel unraveling the threads of Lisette’s mysterious past. Likewise, I was just as willing to accompany Kate on her journey to revive herself and her faltering relationship with her young daughter.

Kate had been thirteen when her father died. No more weekend road trips. No more hours spent after school in her father’s video store, watching movie after movie. Her mother had gone a little crazy after that, like she’d pulled the in the event of an emergency switch that the women in her family told her to pull if her husband ever died, and this was what happened.

She wouldn’t come out of her room for months. Kate had lived on bagels, sandwich meat, and microwaved popcorn for most of eighth grade. She had hidden when well-meaning neighbors knocked on the door, after the first time she’d let them in and they’d worried why her mother wouldn’t see them.

There was still a place inside Kate that resented her mother’s grief when her father died. She still remembered what her mother had said to her on the day Kate and Matt went to the court house to get married. I hope you never lose him. It had felt like a portent. Kate hadn’t been as obvious about it as her mother, but, sure enough, she had still pulled that same switch. And she should have known that Devin had caught on. Children always know when their mothers are crazy—they just never admit it, not out loud, to anyone.

Goodness, it is lovely writing. Strong enough to see you through to the end even when you’re not as invested as you would have liked. In theory, I liked the idea of Kate and Eby (two women living under the same family curse) coming together in this place apart from the rest of the world and . . . figuring things out. In practice, its meaningfulness felt muffled. Neither story was given enough page time to really land. I didn’t dislike any of the wispy and enticing peripheral characters. In fact, I liked them all: brazen Bulahdeen, shameless Selma, diffident Jack, imperious Cricket, and the heartbreaking trio Wes, Luc, and Billy. I just didn’t love any of them. The painful part is that I could literally feel that potential love of mine ghosting out there on the horizon for the entire length of the book. I knew it was possible. It just never materialized. Instead I felt distracted and removed, not disgruntled per se, but just gently fond when I wanted to be infatuated, like I was reading an abridged version of the full story. B-