REVIEW: A Bride By Moonlight by Liz Carlyle

The first four chapters appeared to address a number of events that took place in previous books. I barely remember these events and felt frustrated and lost. It seems like no book these days, be it historical or paranormal, can be read without having first powered through the previous four titles in a series. This is a burden on readers. Even the cast of characters list in the opening did little to clarify the issues. 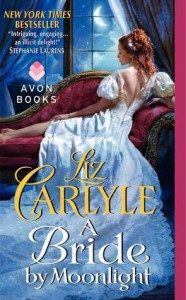 Lisette Colburne has spent her whole life seeking vengeance against Rance Welham, Lord Lazonby who she believed led to the ruination of her family. At the start of the book, Lisette is masquerading as a different woman and discovers that it is another man who was responsible not only for her family’s downturn and that Lord Lazonby had been framed. Lazonby is no meek man and Lisette knows that while he needs her to corroborate his account of events, the minute she loses value to him, he will seek to ruin her.

This is all set up so that we believe that her only recourse is to go with Royden Napier, the new Baron Saint-Bryce, to Welham as his affianced bride. Royden is the assistant commissioner of London’s Metropolitan Police. He has lived a solid upper middle class existence and has followed his father’s footsteps in the search for truth and justice. However, his father led the charge against Lord Lazonby and now Royden is confronted that perhaps the comfortable life he was raised in wasn’t the result of his father’s steadfast public service but something more sinister.

At the urging of his superior officer at the Metropolitan Police, Royden agrees to return to his estranged grandfather’s estate. There Royden is faced with a crotchety great aunt determined to have him marry the young beautiful bride who was supposed to marry the last Baron Saint-Bryce (who died and left no heir which meant the title and entailed estates reverted to Royden); a mystery pertaining to the deaths around the manor house; and his own growing attachment toward Lisette.

While Royden is a familiar, brooding character suspicious of everyone; Lisette is a bit different than the ordinary heroine. She’s very capable and intelligent. She easily sees through Royden’s schemes and confronts him up front about them. Some may call her tart tongued but I found her refreshingly forthright.

“What a damnable coil,” he muttered, scarcely knowing which coil he meant.

“You aren’t contemplating a plunge to your death, are you?” she asked. “Because at this height, you’ll only break a leg and be trapped here, bedridden.”

He cut her a rueful smile. “Those bay towers out front?” he suggested. “Would that get the job done, do you reckon?”

She pretended to consider it. “I fear the pea-gravel would merely mar that striking face of yours,” she said lightly. “But you could climb that monstrous folly we drove past—and if you keep on with your high-handed attitude, I might be persuaded to give you a shove.”

I also liked that while Lisette was physically attracted to him she told him that she deserved better than a man who would regret making love to her. Their despised attraction smoulders underneath the surface, peaking like lava bursts from time to time. The mystery of the deaths of the Saint-Bryce heirs harkens to the house party whodunits of the past.

Take away the complicated beginning and the overarching ties to previous books and A Bride by Moonlight is a satisfying historical romance between a man trying to come to terms with the unexpected legacies left to him by his father and the deaths of the Saint-Bryce heirs and a woman who believed she deserved better but hadn’t ever received it. B-