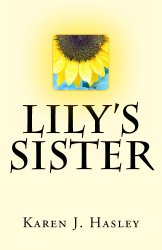 Louisa Caldecott, a progressive woman and independent business owner in 1880 Kansas, is principled, strong-willed, passionate, and generous to a fault. Satisfied with her comfortable life, she’s happy to live in her sister Lily’s shadow. Until Lou meets John Rock Davis, Civil War veteran and man with a past. Until everything she loves is put at risk. Until she is forced to take a stand that threatens her safety, her happiness, and her future. Then all hell – but heaven, too – breaks loose, and self-sufficient Lou finally understands the cost of courage and the power of love.

A while ago, Jane pointed out to me the first book in another of your series but I was also intrigued by this one about the tough people on the frontier of 19th century America. The series starts among salt of the Earth types, Kansans who will endure the heat and drought and loneliness to build a life on the prairie. Until something starts to percolate – something involving a lander grabber, Lou’s brother-in-law the banker and the railroad. And who is the mysterious John Rock Davis of whom a newspaperman remembers hearing his name? Davis wears a gun, says little but watches everything, including Lou. The light flirtation they begin after John steps in to help Lou out of a sticky situation might be subdued but it’s fairly obvious that John has noticed Lou and likes what he knows about her – see it’s not just her looks but her spirit and integrity that appeal to him.

Then there’s Lou’s luxury loving sister Lily, married as little more than an ornament but who also gets from the marriage the fancy things she craves. What’s between her and the man subtly, and less subtly through his thugs, encouraging farmers to sell out and leave? I have to agree with Lou’s friend Kate who flat out tells Lou that she sees only what she wants to see – something both endearing and dangerous. But Lou has grown up in a small town, where everyone’s a friend and there’s never been a reason to carry a gun or worry.

Lou might hesitate at times to attribute the accelerating danger to anyone but it’s fairly obvious from early on who the villain is. And for someone as practical and smart as Lou, the reason should have been easy to figure out. Wishful thinking, hoping and being unwilling to believe that something evil had come to their until then peaceful small town can only get you so far before violence has to be acknowledged and dealt with.

Lou and John are two people not expecting to find a relationship and both a bit unsure now that they seem to have found one. Lou’s temper gets the best of her a time or two but I can chalk that up to her stretching her wings and knowing, deep down, that she can argue with John and it’s okay, his feelings for her won’t change. Unfortunately for Lou, she finds that her relationship with her beautiful and willful sister has now changed beyond all comprehension, that is if it was ever what Lou had thought it was. The truth of Lily also unnerves Lou in her growing feelings for John. Can any relationship be trusted and last? But these two whiplash back and forth in their actions and what they snap at each other so often that, after the fifth time or so, it’s amazing they keep speaking to each other. Once they start kissing though – fireworks.

Because this is a first-person narrative, it obliges Lou to be just about everywhere in town in order to see what we need to learn. Sometimes she’s so busy, seeing things, I wonder that she can run her store. She also has some serious blinders on about her sister – something several frustrated people point out more than once. Will Lou be proven right about Lily and the sense of duty Lou feels she owes her sister or did Lou ever really know her?

Both Lou and John change – are changed by each other. Lou’s always stubbornly clung to Blessing, KS. She’s a small town Kansas girl who loves the open prairie and sunflowers, who hasn’t wanted to travel like her glamorous older sister. Lou’s a homebody while John has had no settled home due to his mysterious job. Each discovers in the other who they want to be with and that home is where the other is – wherever that might be in the country. John has lived by the gun and sells his expertise to those who can afford him – though he’s not a gunslinger – while Lou has been taught and strongly believes in the force of law and not taking it into your own hands. John’s a solid individual – a plain man as he calls himself. Not given to flowery words or public demonstrations, when he tells Lou she “takes the wind out of his sails” or he kisses her, she knows it means something. And as her friend Kate tells her after Lou was in danger and John found out about it, he just looked at Lou and drank her in. For Lou he’s willing to settle down and put away the violence from his past. For John, Lou discovers that home is where he is.

Lou can be very frustrating but – I can see what has made her so. She hesitates to believe that her small town, where she’s lived all her life, can possibly no be dangerous. She waffles on definitively accepting this for most of the book and keeps hoping for the best. If I hadn’t heard of Germans feeling this way about their country through the 1930s, I’d have been ready to shake Lou. She also clings to the promise she made her dying father to look after her sister which is more problematic. Lily is not some helpless younger child. She’s actually older than Lou but Lou has taken it as gospel that she has to watch over and at times dictate to grown, married Lily what she should do or how she should act. And since their father only died five years prior, it’s also not as if Lou has had this burden on her shoulders for ages. Lou’s just one of those stubborn people who is as set in her path as a train on tracks. Her attachment to her store makes sense as it gives her two prized things in 19th century America – an independent income and autonomy.

There is a lot I enjoyed about this story. I know people from Kansas who love the open land and wind sweeping down the plains and I have a friend who graduated from Baker University as did Lou. These are people who are generous of heart and believe in the best of others. Lou reminds me of them. John is a quiet man who says what he means and does what he says he will. From the first, he’s obviously a man spellbound by this woman. I liked the small town, 19th century western setting. I’m looking forward to trying the rest of the books in this series but Lord, Lou is the definition of hardheaded. B-

→ Jayne
Previous article: Friday News: The Internet is down, are adult coloring books over, and the Nine Dots Prize
Next Post: Monday News: AT&T gobbles up Time Warner, dogs of Venice, and “sometimes it’s hard to be a woman”*