If I could offer one piece of advice now, as I fall past the eighty-fourth floor of Victory Tower, with the sky above me the swirling eye of a crimson hurricane, the blade of a goddess stuck in my thigh, and a man I used to love preparing to end the world, it would be this: Magic is not the answer to your problems.

Part of the reason I spent so much time feeling like I was playing catch up with this book is that I didn’t realize until after I’d finished it that it’s part of a series. The book starts in media res. The tension is high, the danger seems to be palpable. The hero appears to be running for his sanity if not his life from an abusive boyfriend who sounds like the worst kind of trouble. Will Miles make it? Can he get to safety through these dirty, late night, menacing streets? I felt like I was along for the heart pounding flight, urging him on, hurriedly looking over my shoulder too as Miles finally grabbed his courage and rushed to freedom. An indifferent city meanders about its business before Miles unexpectedly makes one connection that will change his life – a total stranger who takes pity on this beaten up young man and hands him a bus ticket and a fake i.d. card. Only Miles doesn’t realize that this bus trip will be a one way journey that there’s no escaping. An old enemy/lover will haunt him as a new life as a Keth begins for him. He needs to figure out a whole new existence and his place in it since he’s been designated as an heir to the throne of this world with potential powers that could be unlimited – or that just might end everything as he knows it. 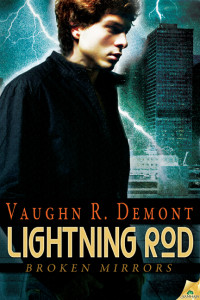 I actually started reading this book almost a month ago and then realized that it wasn’t due to be released until October. With a ton of other books on my ereader and surrounding me, I decided to put it on the back burner for a few weeks and then come back to it. The whole time I was reading other novels, the intensity and adrenaline of the opening stayed with me which I took as a great sign. After finishing up a few other books, I finally opened it back up and started to read. What I hadn’t realized from what I’d already read is how funny parts of it would be or how emotionally wrenching other sections were going to get. Miles gains so much – at least in theory, though he has a lot of work ahead of him to harness this – but the cost to him is high. He loses his entire family because he is excised from their lives – they have no idea he ever existed since as a Keth (wizard) he’s been removed from the tapestry of fate – poof, as if he’d never existed. To paraphrase a famous line “With great powers, comes a great cost.”

As the story progressed, I had to figure out what was happening to Miles – now called James Black – at the same time he was. There’s very little info dumping here and new things get sprung on a newbie reader all the time. Usually, I enjoy this style of narrative but after a while, I need to feel that I’ve pretty much got my footing, that I can relax just a little and sink into what’s happening and not be startled every time a new type of character appears or new world rules get trotted out. Here, just as I’d get everything straight, you’d dump something else into the mix and muddy the waters all over again. Then as they began to clear, WHAM, we’d be off in yet another direction. It kept me on my toes but also wobbled my equilibrium just a touch.

I did manage to keep up with most of the references made and you certainly pull from a wide variety. Greek myths, modern SF, D&D, literature – both old and new, music – mainly jazz and 1940/50s, NA/Indian mythology, horror – it’s all there and with little explanation. This serves to not slow the story down with definitions but might be off-putting (oooh, shouldn’t have used a version of Cale’s most hated word) if someone has never heard of Dinah Washington, Atropos, Tartarus, Coyotes or Shadowfax.

The book is filled with memorable characters. There’s young Miles/James, trying to harness his new wizardly skills, dragons, tricksters, a rat who owns a pawnshop – loved him, other dragons, Hades, Cerebus, another Keth with a taste for 1930s hard boiled crime fiction, assorted zombies and a train car with abandonment issues. Unfortunately there’s also a type of character I loathe in books – the villain who won’t die already. Yeah, yeah James has to be faced with ultimate evil but how many times did this particular one keep popping up? Enough that I knew he’d appear again and began to look for the clues that would show how he was going to escape. They got to be pretty damn obvious – so obvious that when James was starting to end the world and something gets dropped, I startled my cats when I yelled, “Oh, like that’s not going to muck things up!” And sure enough, it did.

Did I enjoy, “Lightning Rod,” even despite the dreadful name? That’s a yes. Did I groan that hawt, smexy sex has a significant deal to do with wizard power? Yep, but at least the book didn’t feature a magic hoo-haw, if only because the sex is m/m. Or is that still considered magical hoo-haw lit? Would I keep reading if there are more books to follow the open ending of this one? Yes, probably. But I hope that if there are more books, some of the things that bugged me about this one won’t feature in them. B-