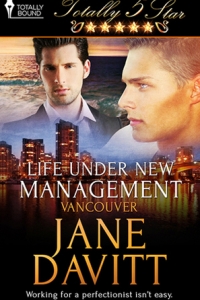 Working for a perfectionist like strict, sexy-as-hell Ethan isn’t easy. Falling in love with him? No problem at all.

Taking a bar job in an exclusive hotel is a stopgap for Andy. He’s an actor and his big break is coming soon—he knows it. His hot, new boss, Ethan, is strict, demanding and totally off-limits, but Andy can’t stop thinking about him.

When Andy learns of Ethan’s need to be in control of his partner—in bed and out of it—he’s stunned by the intensity of his reaction. He wants Ethan guiding him, bringing order to his chaotic life. And he sees that Ethan needs him too, though they can’t be open about their feelings.

Ethan deals out deliciously perverse consequences for misbehaving, but when it comes to incentives, he knows just what to offer to have Andy on his knees begging for more.
But some secrets can’t stay that way for long. And when difficult choices arise, for once Andy can’t turn to Ethan for guidance. This time, he’s on his own.

Dear Jane Davitt, you mentioned your book on one of DA monthly promotional threads and I clicked on it. I have to admit, though, that I almost DNFed it. Thinking about how much you want the guy who interviews you may be a setup that pops up often in m/m romances, but it is one that irritates me a lot. If your name had not been on the cover, I would not have come back to the book. I lowered my expectations of believability, but I still want characters to not behave like idiots when they are interviewing for the job they are supposed to need so badly.

I do not know why at this point I decided to give the book a second chance. Maybe because Ethan seemed to be very clear in his rebuke that he was not interested in Andy’s ass. Because no kidding, that’s what Andy asks his potential employer, the man who just agreed to train you to be up to standards of his team: is he gay or not.

However, while my opinion of Andy was not very high, by that time I was hooked on the chemistry between these two guys and I figured, at least the sex should be good, even if I might have to roll my eyes at manager of a luxury hotel forgetting all about his beloved job. Luckily that did not happen. I mean of course they eventually get together, but it does not happen right away and they do discuss the issue of employee and employer starting a relationship. Not only that, but the narrative follows through to a conclusion that actually made sense to me.

“I’m worried about you getting into trouble at work.”

“I am too,” Ethan admitted. “It’s straightforward if I’m harassing you. That’s totally forbidden. It’s less clear-cut if we’re in a relationship.”

“I read the handbook.” He’d memorized one line. “The hotel discourages romantic relationships between supervisors and subordinates and prohibits any such conduct if it is unwelcome.” And it isn’t. Unwelcome, I mean.”

“Yeah, that’s the part.” Ethan signed. “Not against the rules, but not a good idea.”

“I’ll transfer,” Andy suggested. “Work for housekeeping instead or in the kitchen. That way you wouldn’t be my supervisor.”

Basically, the main reason why they decide not to say anything right away is because they are not sure if it will work out between them and if it does, Andy would be willing to transfer to another division.

Whether it all worked out as they planned, I will let you find out if you decide to read the book.

“Sorry to disappoint you, but no. I don’t have a dungeon tucked away behind a secret door and I’ve never put a collar around anyone’s neck.” Ethan looked at him, his gaze compelling. “I’ve worked out what gets me off by trial and error, but it’s not easy getting my particular itch scratched.”

“Ethan laughed unexpectedly. “If you knew how wide your eyes were. No, nothing like that. You want to know? It’s complicated and simple at the same time. I can’t enjoy sex unless I’m the conductor. Every note originating from me with my partner performing perfectly.” He narrowed his eyes, pure predator in that moment. “And I’d be lying if I didn’t say part of me enjoys punishing failure. Maybe there’s a healthy dose of the sadist in me after all”.

So I took it that Ethan clearly likes submission, and he clearly wants to be in charge during sex, but he does not even call himself a Dom, and he does not want a Sub or Slave, he wants a partner.

“When am I leaving?”

“Up to you. You’ve got a shift tomorrow, but if you want to stay the night, you can.”

“Sleeping on the couch?”

I’ve talked about Ethan, but the story is from Andy’s POV and I loved that we could learn so clearly what he wanted and what he was getting off on. The story is not so much about Ethan playing Psychic Dom (in fact he was not playing Psychic at all, he usually asked whether Andy liked things or not), but more about Andy rediscovering his buried kinky side, and I really liked how it was done. Andy was never seriously involved in the scene but he always was curious, and we learn one of his attempts at relationship failed because he made a clumsy attempt to be a little kinky and the other guy was not interested. Ethan was not really interested in being in charge outside of sex, but Andy asked him to take control in some other areas of his life because he knew he needed and wanted help. Andy was not broken or anything, he was just drifting, and I felt like Ethan helped him to ground himself and stayed back.

Ethan didn’t want him kneeling or submissive. Ethan wanted him perfect. By whose standards, though? Andy tugged at a lock of hair, brooding over Ethan’s assessment of him as scruffy and out of shape. It was true he’d lost a part because he wasn’t buff enough and they weren’t prepared to give him time to train, but not every role called for abs of steel. Fast food featured too often on the menu, but he was active, walking around the city, running if he was late and it burned calories.

Some help tidying up his life would be nice. He’d read about Hollywood stars with personal trainers and turned the page with a dismissive comment to disguise his envy.”

More importantly this book felt like a romance, not just erotica – these guys fit together. They started to grow, learn about each other kinks, and adjust to each other.

I thought that apart from the initial “lets crush on my future boss and now boss,” there was little to no silliness in this book – however, I felt a certain transition occurred too fast. Granted it was closer to the end, maybe in the last third of the story, but when the book jumped forward two months I felt like a chunk of their characters growth passed behind the scenes and I did not like it. The first couple of weeks of their relationship (or was it a month? Not sure. ) were described in great detail, but I thought readers needed to see more on-page changes in those two months we did not get to see.