Young Gincy Tate’s father is murdered before he can fulfill a contract to supply the Army with remounts. In order to pay his debts and save the ranch, she must make the sale in his place. Afraid the lien-holder, whom she suspects of being the murderer, will foreclose before June 7, 1883, she tells no one Morris Tate is dead. Instead, she says he is here, there, or elsewhere. Gincy hires two cowboys to help trail the herd to Fort Spokane. One is on the murderer’s payroll, but Sawyer Kennett hires on because he has decided Gincy is the woman for him. With an old Indian, who is her shirttail relative, the group battles storm, stampede, and sabotage to win their way to the fort and sell the herd. Then Gincy must make it home in time to beat the foreclosure and confront her father’s murderer – but only if Sawyer is the man she prays he is. 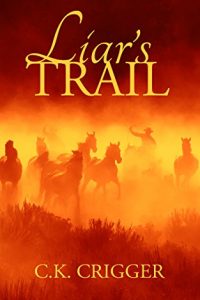 After I read your book “The Prince’s Cousin,” I thought it more like a fantasy with romance than a true fantasy romance book and I feel the same way (though now speaking of Westerns) about this one. And as with that book, I feel that men would probably enjoy this book as well since it’s not loaded with “gushy stuff.”

This is a time when honor was more in style, when more people believed a man’s word was his bond and unfortunately also when the small landholders out west had to fight the big sharks for a piece of the pie. I appreciate that you gave Morris Tate flaws (stubborness, a taste for the fancy girls in town and wetting his whistle at one of the town saloons) in addition to his love for his daughter and his determination to see his debts paid. He wasn’t in the book for long but his decency shows for far longer in how his daughter acts and thinks.

Though Gincy does has moments when I want to smack her — she and Thomas know that Blau wants the ranch more than the money so it ought to be an easy step from there to start out the drive expecting the worst and trying to be prepared but instead they always seem to be reacting instead doing proactive protection of the horse strings. I can understand that they have to be willing to try and trust Fitch at first — they have no choice as they need him to pull the third string — but Gincy trusts him long after I would have stopped. But then maybe that’s just my cynical 21st century self. I do think that she and the grandparents actually do very well dealing with Morris Tate’s death and managing to hide it for as long as they do.

It’s kind of fun to have Sawyer chasing after Gincy rather than the usual other way around romance plots. And as with Morris Tate, you make Sawyer a 19th C man. He’s not too sure of Gincy heading the drive and longs for the peace of mind he’d get from actually talking to her father. He’s also disturbed that the woman he loves appears to be involved in something that feels a little shady to him and vastly relieved when he finally discovers the truth.

It’s obvious you know your way around horses and horse drives and have a fondness for the outdoors. I like the way Thomas and Martha are portrayed — not belittling nor fawning. In addition, Gincy tries to stick up for her Indian relatives and the local tribes in general but has the wisdom to see when further talk would only raise more trouble.

Readers who like cattle drive plots, might like this one. It takes the heroine far longer to figure out who’s her enemy than seems reasonable (but she is only 19 and has never had the weight of handling a drive before) however I liked her determination. “Liar’s Trail” was a 2004 Eppie finalist for Best Western and after reading it, I can see why. B-