I liked the poetic nature of the title given that this book kind of closes the door on the Black Ops, Inc., or BOIs, crew. Joe Green is indeed the last man standing of the group. The other living members have all fallen in love and had a happy ending. Joe’s done the falling in love part. He can’t stay away from Stephanie Tompkins. But the happy ever after ending is eluding them, primarily because Joe is driven to seek justice for the death of his best friend, Bryan Tompkins, Stephanie’s older brother. 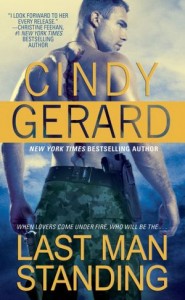 This leads him to Sierra Leone, a cell, and certain death. Stephanie, a code breaker at the NSA, sees a picture of Joe, beaten. Under the photo is a notation that he was arrested for the slaying of a Sacred Heart priest. Stephanie calls on the BOIs to get Joe out but the team is deployed on a deep undercover mission with no communication. Rafe is manning the home base but is recovering from a severe bout of malaria. He tells Stephanie to wait until the team comes back, a week, maybe ten days. Stephanie believes that Joe will not make it ten days and flies to Sierra Leone. Help comes in the form of a teenage boy who Joe saved. Together they work to get Joe and Stephanie out of Sierra Leone to safety.

The setup worked for me. Stephanie is out of her mind in love with Joe and she wasn’t going to leave him in a Sierra Leone prison to die alone. While a number of coincidences, or conveniences may be the better word for it, occur to aid Stephanie in freeing Joe and escaping with him, Stephanie never acted TSTL. In fact, she demonstrated for Joe a certain type of strength he hadn’t seen in her before.

I’ve really enjoyed this series and reading Last Man Standing was bittersweet for me and maybe it was for you as the author. The tone of the book seemed regretful. Joe wanted Stephanie, loved her, but he didn’t love her enough to be with her. Instead, he had to seek out the truth behind Bryan’s death, a truth he believes implicates someone wealthy and powerful. Stephanie loved Joe more than anything. She’d do anything for him, including following him to a hellhole in Sierra Leone.

Joe says to Stephanie when he leaves her that he doesn’t love her, not enough. And frankly there is a ring of truth to that even though Joe would deny it. He characterizes his departure as being weak, succumbing to the pleasures of Stephanie’s flesh where the better man would have resisted and broken it off with her long ago, knowing that he could never commit. But I did view Joe as not loving Stephanie enough or maybe he was scared of loving her.

Even though I admired Joe and his dedication, there were several points where I wanted to tell Stephanie that she was just too good for him. But her dogged pursuit of Joe and her refusal to accept him pushing her aside won her the man she wanted in the end and that is kind of kick ass all on its own.

What does happen is that Joe begins to see that Stephanie isn’t the frail, weak kneed girl he must have thought her to be. She blows his mind (and well she should). I never could figure out if Joe was falling in love with a new Stephanie, whether Stephanie blossomed under dire circumstances, or whether Joe was simply blind to the kind of person that Stephanie always was. I think it was the last one. Joe was so caught up in his own mission that he couldn’t see the gentle but determined woman that Stephanie was.

Even though this was the last in a long line of books, I definitely think that a reader could pick this up and not be lost. There aren’t many appearances of the other BOIs until late in the book. The focus is primarily on Stephanie and Joe. B-