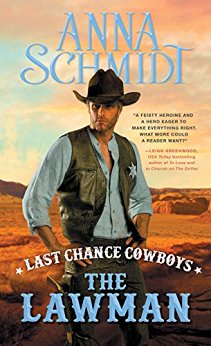 “This is me, Addie,” Jess murmured. “You and me, the way we always were.”
But it wasn’t, no matter how much she wished it were true. They were different now. She would always love him…
But can she trust him not to break her heart?

Jess Porterfield fled to the big city after his father’s sudden death, leaving behind his family ranch-and his childhood sweetheart. Now Jess has returned as the local lawman, determined to prove his worth…and win back the one woman he could never live without.

Young frontier doctor Addie Wilcox was devastated when Jess left her behind. Now he’s back and it’s difficult to remember why she should keep her distance. But with the town’s richest man set to see her hang for a crime she didn’t commit, Addie must put her faith in the lawman who broke her heart-and trust that together they’ll find their second chance at love.

Last year I found Addie’s character very intriguing when she played a small role in “The Drifter,” and hoped that we’d see more of her. Jess – though not actually in that book – also caught my attention. Who was this man who had left his family high and dry and could his character be redeemed? The Lawman sort of answers both issues.

I think a nice job was done in catching up the action and characters from the first book without it reading like an info dump. But from the first scene, we know who is who, what is what and pretty much how things will play out.

Well, as Jess rides back home after being gone six months, at least he knows he was a schmuck to leave the rest of the family holding the bag while his mother descended into depression, the ranch dried up and blew away and the land grabbing neighbors moved in for the kill. Oh, yeah and he left his girl. After finally facing up to his schmuckness, the prodigal son has returned home to discover that everything is … doing okay. They really did manage to get along without him but they sure are mad at him now. Even Addie. Especially Addie who doesn’t fail to lay into him when he clumsily tries to cross that bridge now that he’s come to it. The whole town watches him fall headfirst off the bridge of that relationship straight into the proverbial water. What will he do to reestablish himself?

The position of town marshall is open and there are murders on the loose. Someone has to find the evidence to arrest them for his father’s death. Jess knows what the town and their neighbors probably think of him leaving as he did but he had his reasons. And he did plead with Addie to come with him. Addie, though, is a woman who knows her mind and is not going to settle for life as Jess wants it – on his terms and by his dreams. Yes, she loves him but she also loves the town they grew up in and didn’t want to leave, especially with someone who just assumed she would do that and marry him. A woman wants to be asked about something that important.

There is also the issue of the villains who are back and still ugly, mean and nasty. One is also making moves on Addie much to Jess’s fury. But does he have the right to step in anymore? And what about a job? Doc Wilcox goes ahead – against the wishes of at least some in the town though he won’t say whom – and offers Jess the job of town marshall. That’s TOWN and not outside town or anything that might have happened earlier outside of town. Doc is no fool and I think he knows that Jess is fudging on the promise to stick to this. I like Doc and can see where Addie got her spirit and no nonsense attitude. The man doesn’t suffer fools – at all. Addie isn’t all that happy that he enlists her to try and get Jess busy enough to stick to his job and not stick his nose where it might get him shot. This part of the plot mainly gets pushed to the background which I found frustrating having read the first book and wanting to see justice done.

Jess discovers a situation that he and Addie can help fix for some old friends and in this, Addie sees the man she fell in love with. The one who tries to help others. This was actually one of the things I liked best about the story. Meanwhile, Doc Wilcox is feeling slightly better about letting Jess have the marshall job when he sees Jess’s experiences away have somewhat matured him from the hotheaded youth who left home in the face of his family’s need. While Addie sees that Jess has changed in some ways, they still need to work out why he left, never wrote or if he’d break her heart again should she yield to her feelings and let him have the chance to. But first, they have another murder to solve and Addie to exonerate in the face of the evil villains who look delighted at the thought she might be hung.

The evidence against Addie is circumstantial at best but compelling in a town that is basically owned by the villains. Every step forward in her defense might also work against her. Addie and Jess get time to think about whether or not they’ll have the future they’d always hoped for and what exactly they now want – should Addie beat the seemingly overwhelming odds. But then with page time ticking down – let’s say villain exposition comes to the rescue.

After Addie was proven innocent – very convenient and timely confession of the criminal – and Jess bursts into proposal mode, Addie starts on her jail healthcare proposal and marriage plans are everywhere though I still haven’t heard tell of any convo between Addie and Jess about his time away. And things are quiet – too quiet – for a western with a murderer still on the loose. Well, we all can guess what might be coming and indeed it does come. Poor Addie gets hauled around like a sack of potatoes while Jess needs to take better care of his horse who he gallops around on everywhere but never seems to rub down.

So the baddies get taken care of. Then Addie begins her jailhouse work and a wedding gets planned and … there’s a lot of stuff going on after the one last blip of danger. Okay the next book appears to be set up with a dark and dangerous looking hombre who already has Jess worried. Then just as I was getting impatient, something major happens. Something Addie has dreamed of and something that wins Jess major points with me in how he works it out and gets it done for the woman he adores. B-