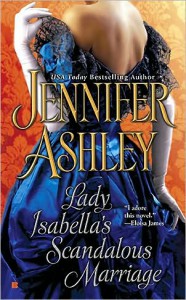 I really enjoyed The Madness of Lord Ian McKenzie and started reading the sequel featuring a brother of Lord Ian the minute Lady Isabella’s Scandalous Marriage dropped on my doorstep.      Lady Isabella met and married Roland Mackenzie on the night of her debutante ball.   Mac, as he is called,   crashed the party on a dare but the moment he saw her, he had to have her.   In true Mackenzie style,   he swept her out onto the terrace and convinced her to elope with him.

Her father, Earl of Scranton, disowned her for eloping with Mac, a debauched artist with a dissolute reputation.   Isabella’s father was a good judge of character because while Mac did truly love Isabella, he was an alcoholic whose moodiness, debauchery, and frequent, unexplained abandonments   drove Isabella to leave the marriage.   At the start of the book, Isabella and Mac have been separated for three years.   They both love each other deeply but Isabella feels like the pain of living with Mac was simply unbearable.     Mac, spurred by his brother Ian’s happiness, is determined to win Isabella back.

At the start of the book, Mac has   dried out.   He has changed a great deal from the man that Isabella loved and then left.   All of his former friends have left him because Mac is simply no fun anymore.   He’s not into whoring or drinking or general revelry.   His entire passionate focus is on one thing and that is Isabella.

Isabella brings herself into Mac’s sphere in order to inform him that he is being expertly forged by some unknown artist.   Mac, who hasn’t painted a decent work since Isabella has left him, is intrigued rather than dismayed.   Mac defined himself as an artist but never thought much of his own product.   Upon seeing Mac, Isabella is struck by how much she misses him in her bed and in her life but also that he looks like the same Mac – tartan clad, wild eyed, and bad for her.

Because the book starts with a reformed Mac, it was hard to get a grasp on why Isabella, who so clearly loved Mac and who believed that Mac loved her, would not immediately forgive and begin anew.   As the story progresses, we get a clearer idea of the painful tragedy that was Isabella’s marriage.   There were some very poignant images portrayed toward the end of the story which would have made Isabella’s initial resistance more understandable.   (For example, at one point Mac is remembering how he delighted in showing off how he could convince Isabella, a very proper young woman, to engage in scandalous acts    which embarrassed her but she did anyway because she loved Mac so much).

I wish    we had seen more of Mac’s recovery from alcohol dependence rather than having been presented with a fait accompli but the book is focused on how Mac wins Isabella’s trust post alcohol dependence versus having her see him struggle to recovery and renew their relationship in that way.

Isabella’s inability to trust Mac waged war with her deep affection for him and, well, her lust for him.   Everything that the two of them had shared was built upon that first instance of impossible-t0-ignore lust which deepened into love despite the troubles of their marriage.   The elopement typified the marriage.   It was an act of recklessness and brought them both to their knees, emotionally.

A romance built around two people who really truly love each other from page one and are open about their feelings for one another seems like it would be conflict free but instead it’s fairly heartbreaking.   Mac isn’t sure what he can do to convince Isabella he is changed and Isabella feels like she has gotten to a point in her life where the poignancy of the loss of her marriage isn’t killing her emotionally.   Mac wants to be in Isabella’s bed but recognizes that lust has never been a problem for them.   Both of them struggle with whether being physical with one another is harmful and so each sexual encounter is tinged with a bittersweet emotion and post coitus recriminations.

I’ve always loved a marriage in trouble story and this is a slightly different take on a favorite trope.   The suspense plot was a bit ridiculous and I think the story could have easily excluded it without making a bit of difference.   I loved revisiting Ian and Beth and the other members of the family.   I think you are doing a great job of building interest for the future books without being intrusive about the fact that these brothers are sequel bait, even if they are sequel bait.    B-