Lady Anne’s Lover is the first of your books I’ve read. It’s the third in your London List series but works fine as a stand-alone read. I enjoyed reading it although it left me a bit bemused. The mood of your book is light and humorous and yet your hero struggles with alcoholism, your heroine is on the run from her father who has been molesting her, a woman in the book has been raped and viciously murdered, and the villain responsible for that crime tries several times to kill again. You don’t belittle any of these issues as much as you treat them casually; there’s no angst, no gloom and doom in your prose. Lady’s Anne’s Lover worked for me but I can see other readers being distressed at its tone. 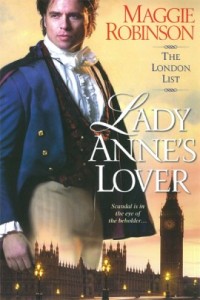 Nineteen year-old Lady Imaculata Anne Egremont, in a last-ditch attempt to escape her father (he both beats and attempts to rape her), has answered an ad in the back of the tabloid The London List placed by a Welshman who needs a housekeeper. Based on the ad, she assumes the man, Major Ripton-Jones, is an elderly gent who won’t notice her utter lack of housekeeping skills. When she arrives at his filthy home, Ripton Hall, she discovers that the Major is actually a one-armed man of 33, who spends virtually all his time plastered on gin. Imaculata, who has renamed herself Mrs. Anne Mont, doesn’t let this bother her. She needs to stay hidden from her father for the next two years at which point she can come into her inheritance and be free of his control.

Gareth, though three sheets to the wind, is taken aback when Anne introduces herself.

“Good afternoon,” Anne had said briskly, masking her surprise and keeping her chin high. She was bound to get a crick in her neck if she had to address him for any length of time.

“I believe Mi-uh, Mr. Ramsey from The London List sent word to you that I was coming.”

He looked down at her, way down as he was so very tall, with bloodshot blue eyes. “You can’t be the housekeeper.”

He did not slur a word, although his breath nearly knocked her over. She would light no matches anywhere near him or he’d go up like a Guy Fawkes effigy.

“I can indeed, sir. I have a reference from Lady Pennington.” She pulled the forged letter from her reticule.

Evangeline had wanted her to lie and say she lost her husband at Waterloo—which would have made Anne a fourteen-year-old bride—but the man in front of her had probably lost his arm to war so that did not seem at all sporting. Anne knew she looked young—she was young, her freckles forever marking her just a step from the schoolroom. She had decided to be reasonably honest. If Major Ripton-Jones dismissed her, she’d go back to Evangeline and try for something else. Tightrope walker, street walker, it really didn’t matter as long as she escaped her father’s predatory attentions and beatings.

“Housekeepers are always addressed as ‘Mrs.,’ Major Ripton-Jones. Surely you know that. And I am old enough. I’ve been in service for—ages.”

Ever since she had walked into his house, anyway.

Anne is wrong about how Gareth lost his arm. He served fifteen years in the Royal Welch Fusiliers and survived unscathed. He shattered his arm when he fell off a tenant’s roof a year ago and had to have it amputated at the elbow.

The last year has not been kind to Gareth. His father died and left him mortgages against Ripton Hall Gareth can’t pay, the love of his life whom he was to marry dumped him when he lost his arm, she was then murdered and everyone thinks Gareth did it. He has coped with all this by letting Ripton Hall fall to pieces as he remains constantly drunk.

Gareth allows that Anne may stay though he tells her he probably can’t pay her and returns to his gin. Anne begins to clean house. The two have several amusing encounters over the next few days and then Anne gets a brilliant idea.

The fork she was holding dropped to the slate floor with a clang. Lord but she was a nitwit. The major needed a rich wife, and she needed her money to become independent. Major Ripton-Jones could marry her! Not a real marriage, of course. She hardly knew the man and what she did know did not bode well for any Mrs. RiptonJones. Who wanted a sot for a husband? For all his assurances that his habits were harmless most of the time, she was suspicious. He had a melancholy look about him quite apart from any depression he felt over the loss of his house. He was too lean (and wouldn’t be apt to fatten up from her ministrations unless she studied her cookery book with more diligence) and darkness hung over him like one of the ever-present Welsh clouds.

Anne presents her proposal to Gareth with one condition: he must give up drinking. She also tells him this will be a sex-free arrangement. Gareth agrees to the former condition and decides he’ll try to seduce her out of the second.

Anne and Gareth work as a couple despite the difference in their ages and backgrounds. Although Anne hasn’t told him about her father, Gareth realizes something has made her afraid to be touched by a man. He does work to seduce her, but does so with gentleness and intelligence. He allows Anne to reclaim her sexual self (her father just groped her; she left before he could take her virginity) slowly and on her terms. Their love scenes are sweet and sexy.

I also enjoyed their partnership outside the bedroom. Anne can’t cook to save her life, so Gareth takes over that responsibility. The two talk and argue, always treating the other with respect and often humor. It’s easy to see them as a couple who could share a life–they develop an easy rapport and work together to make Ripton Hall a safe, clean, pleasant place to live.

Neither of them is portrayed as perfect. Gareth does not completely give up drinking and, when in his cups, says some rather snotty things to Anne. For her part, Anne doesn’t tell Gareth about her past (she behaved scandalously in London in a failed attempt to make herself less attractive to her father) even when she knows she should. I liked that they were flawed and that the problems in their relationship stemmed from their behavior rather than from some outside force.

I admired the romance in this book more than the mystery. The identity of the villain wasn’t hard to deduce and the motive for murdering Gareth’s old lover and attempting to kill Anne is rather thin.

Lady Anne’s Lover is entertaining as long as one doesn’t think too hard about the serious subjects it handles so lightly. I give it a B-.