I purchased this book during Sourcebooks after holidays sale for 99c. I had heard a lot of talk about it and it was a title listed on several year end “best of” lists, however it was the promotional price that finally spurred me to pick this book up. I have tried several steampunk books since Meljean Brook’s Iron Duke but none have delivered, many focused too much on the external trappings of the steam world and too little on how the political and social aspects would be utterly transformed if steam powered contraptions were so fully integrated into everyday life. In short, the “punk” aspect of the subgenre wasn’t given voice. 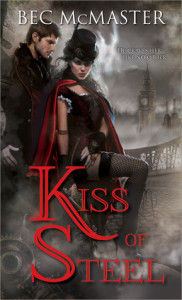 Kiss of Steel is the first historical steampunk since the start of the Iron Seas series that balances both in depth world building, romance conflict, and social conflicts.

In late nineteenth Century England, Queen Alexandria sits on the throne but her power is deemed to be nominal. The true power lies in the hand of the Prince Consort and a ruling quorum of seven Dukes and Duchesses. They oversee the part of England known as the Echelon. To be part of the Echelon, you must be born of the right lineage and, at the age of fifteen, be given the blood rites. In this historical England, blue blood isn’t just a saying. It denotes a specific male personage who has partaken of tainted blood that allows them longer life, increased acuity in all senses, and greater strength. The downside of the virus is that at some point you must be killed because it turns you into a ravening beast. They call it a vampire. In another book it might be termed zombie.

In the slums of Whitechapel, Blade rules. Blade is a rogue blue blood, someone who isn’t supposed to exist. He escaped the Duke of Vickers who infected him and fought off a horde of metaljackets and royal assassins until the people of the slums rose up against the ruling class and the Crown left Whitechapel to Blade.

Honoria Todd’s father was a scientist in the employ of the Echelon. He was working to create a vaccine that would render the virus impotent. Honoria’s father believed that to remove the blood curse would level the playing field. However, his research got him killed and Honoria and her family flees to leaven. When she fails to present herself to Blade, he summons her.

Honoria Todd is holding her family together by the thinnest of threads, earning money as a finishing tutor to girls trying to capture a husband from one of the Echelon. She offers the only thing she has in barter for Blade’s protection, other than her body, and that is to teach him to speak better. This part of the story is wisp thin but I think both Blade and Honoria acknowledge that. Blade accepts her offer because he’s attracted to her and it gives him an excuse to spend time with her.

Honoria and Blade are tied together by their mutual hatred to the Duke of Vickers. Vickers has placed a bounty on her head. Vickers would like to see Blade dead. The worldbuilding, while rich and detailed, raises more questions than it answers. Who kills those in power that enter the Fade? Clearly they don’t go quietly into the night. Why aren’t women allowed to partake of the blood rites? How does longevity affect those with the virus? What good would the vaccine do to those who have the virus? How will the HEA work out between the long lived Blade and the human Honoria?

The unanswered questions to the worldbuilding left me a tad frustrated at the end of the book. Not all of them needed to be kept secret to spur the series and some of the questions represented plot holes that I felt should have been closed in this book. However, that aside, there is a compelling romance within this steampunk series and lovers of that historical fantasy fiction would be remiss to not pick this book up. B-