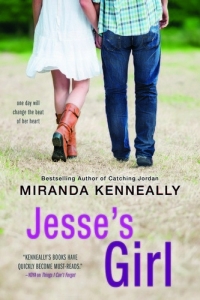 I’m a big fan of your contemporary YA novels. Actually, I’ll be honest. You’re currently my favorite contemporary YA author right now. I like that while your novels all contain a romance of some sort, the story always focuses on the girl and her journey of growth. They’re both girl- and sex-positive, which definitely gets a thumbs up from me.

Many of your previous books featured girl athletes (a favored character type of mine), but Jesse’s Girl departs from that pattern with Maya Henry. Like other books in this series, Jesse’s Girl is set in the town of Hundred Oaks. Which, if you’ve read the other novels, should tell you a lot about how well Maya fits in. You see, Maya is an ’80s-loving punk girl. She’s the lead guitarist of a heavy metal band and dreams of becoming a rock star.

Every year, high school seniors get the opportunity to shadow someone in their aspired profession. Maya lands a chance many other girls her age would kill for: she gets to shadow Jesse Scott, a teenaged country idol.

Wow, I feel like Maya could have been someone I knew in high school. She was hooking up with a guy, hoping for something more, only to discover she was just a way to pass the time until the girl the guy really wanted broke up with her boyfriend. (What a jerk, right?) The band she formed kicked her out because they didn’t like her pushing them to experiment and try styles other than heavy metal. After some humiliating experiences, she’s afraid of performing solo despite having momentous talent.

Shadowing Jesse, even though it doesn’t follow the carefully scheduled itinerary, was really the best thing for her. She learns how to sing properly – with her diaphragm and not her throat. She meets a voice coach, and the manager of a high-end music store offers her lessons. The thing I’ve always liked about these books is that they don’t shy away from showing socioeconomic class discrepancies and their realities. Maya has so much potential, but she can’t afford voice lessons or a guitar lessons. She learned how to sing through the school choir and how to play the guitar through YouTube videos.

But I think that’s also one of the great themes of this book. Where there’s a will, there’s way. If you want something, go after it. And that sometimes, you have to take a risk to get that opportunity. All great things for teen girls to see portrayed in fiction.

Another thing I enjoyed was seeing Maya’s family. They’re present. They’re supportive, despite Maya not being the sports fanatic the rest of her relatives are. It also gave us a chance to see Sam and Jordan again. (Sam and Jordan are the couple from the first book in this series, Catching Jordan, and Maya is Sam’s little sister.)

It served as a great contrast against Jesse, who’s become disillusioned with the music industry. His family doesn’t support the direction his music is going in. He doesn’t have many – or any – friends. It’s hard to know who’s genuine when people just want to use you for their own benefit.

The romance unfolds in expected ways. I definitely sympathized with Maya. It’s hard falling for a famous person. If you’re tightlipped about your relationship, the media will try to make up stories to get a rise out of you. You’re separated for long periods of time. I had a harder time getting a handle on Jesse. He blows hot and cold, but I guess we can chalk that up to him going through a rough time. I do wish the plot thread involving his troubled relationship with his parents could be resolved definitively, though.

While this isn’t one of my favorite Hundred Oaks books, I do think it’s a worthwhile read. It’s always great to see a teenage girl come into her own and remain in control of her sexuality and self. B-