REVIEW: It’s All Geek to Me by J.L. Merrow 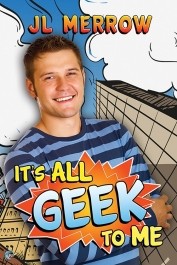 From the second sentence of this novella, which mentions a shop window full of “Daisies vs. Ghouls” merchandise, I was charmed. My people! Well, not really, because our narrator is not in fact a gamer or a comic book fan or any kind of geek unless you count Rugby. (And why not?) What he is, is madly in lust with the tall guy behind the shop counter. What he also is is a very entertaining narrator. He may not be a classic geek, but he’d fit right in.

Jez is on an errand of mercy, replacing the comic book that smashed up along with his mate Tel. He’s instantly smitten with comic book store clerk Rhys, fantasizing that working at the “superheroes spiritual home” has given him powers and dubbing him Seducto Smile. He himself rapidly evolves into Blushman. (“Costume: a bright pair of saggy underpants. Socks with suspenders. And sandals.”)

A bad break-up has left Jez feeling down on himself and he can’t imagine Rhys, with his piercings and studs and too-hip-to-shave stubble, wanting anything to do with him. “I’m like the opposite of cool,” he grumbles to Tel. “If I were a supervillain, I’d be Antifreeze.” (For an avowed non-geek, Jez uses geeky metaphors an awful lot; he thinks of Tel in his hospital bed, “with scaffolding all round his legs like a beardy cyborg.”) His only in seems to be getting a crash course from Tel so he can pretend to love all things geeky. And the amazing thing is, it seems to work.

With his blathering and low self-esteem and self-described “cuddly” body, Jez’s spiritual home would probably be chick-lit. I might have gotten utterly sick of him except 1) It’s a short novella, 2) Blathering sounds so much better in British vernacular, and 3) He and Rhys are delightful together:

“Um. Just so you know, I don’t actually make a habit of asking blokes to go to sex shops with me the second time I see them.”

“I mean, it’s not like this is even a date, or anything,” I babbled on. “Just, you know, me buying and you selling. Stuff. Comic-book stuff. Not, like, sex or anything. Um. Is there an apocalypse happening any time soon? Because that’d be good.”

Rhys was laughing helplessly. “Sorry. Fresh out of apocalypses. You’ll have to come back next week. Or I could ask Kelly if we can order one in for you.”

Their actual date turns out to be at a Rugby match, and culminates in some playful sex and some not very surprising revelations. It’s a slight story, and the ending is fairly obvious from the get-go. But it definitely did its job as a short comic romance; I read pretty much the whole thing with a smile on my face. B-