REVIEW: Into the Storm (Signal Bend #3) by Susan Fanetti 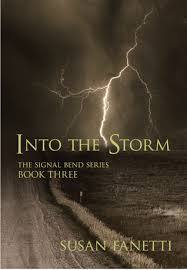 I read and really enjoyed the first in the Signal Bend series, Move the Sun. The second entry, Behold the Stars, which Jane reviewed, I could barely finish, it was so violent. So I bought this book with some trepidation, but with the hope that your voice, which worked so well for me in Move the Sun, would work again for me. I was pleased to find that for the most part, this was the case.

Signal Bend, IN is in recovery from a war. The Night Horde MC, which runs the town, took on a drug kingpin in the last book and won, but not without horrifying collateral damage to the town and even more, to the townsfolk. Showdown Ryan suffered some of the worst losses. His oldest daughter, Daisy, was killed and his wife packed up their two younger girls and took off. Showdown takes all of the blame for the losses. He knows that as the #2 in the Night Horde, his family was a target and they paid the ultimate price for it. He is empty, he is barely putting one foot in front of the other and more than once has considered ending it all. He can’t bear to go back to the home where his family was attacked, and has been existing at the Night Horde’s keep.

Shannon Bannerman has been hired to run the Keller Bed and Breakfast, a new venture owned by the President of the Night Horde’s wife (and protagonist in books 1 & 2), Lilli. Shannon came to Signal Bend from the big city, which makes her a curiosity for the people of Signal Bend. She is extremely over qualified for the job, but also wants it desperately. It seems clear to the reader from the start that she is running from something. Shannon is very attracted to Showdown, but knows his story. She knows that it’s incredibly unlikely that he’d ever have any interest in here. Despite that, when the opportunity presents itself, Shannon lets Showdown know she’s attracted.

“What is your problem?”

At Shannon’s sharp question he turned to see her standing there, holding her arms across her body against the chill. The stance made her cleavage even more distracting.

“What?” He tossed his butt to the ground.

She took a couple of steps closer. He could reach out and touch her if he wanted, run his finger down the cleft between her breasts. He clenched his fists.

“You have to know I’m interested. You act like you have some kind of claim or responsibility or I don’t know what. But then you ignore me – or you don’t, and you say what you said in there. What the hell is your problem?”

Her brow creased at that, and her eyes narrowed. Then she surprised the shit out of him by taking the last step between them and grabbing his face in her hands. She leaned in and kissed him, her lips silky on his, her mouth open. She tasted of tequila. He felt her tongue tracing his lower lip. He hadn’t had a woman’s mouth – her tongue!- on his mouth in…Christ, five years? Since Holly would even let him kiss her like this? His cock turned to cast iron, heavy and hard, and it was all he could do not to grab her. But he didn’t. He didn’t grab her, or kiss her back. He sat there feeling shocked and tormented.

When she pulled away, she searched his eyes for a moment. Then, with a sad little twitch of her lip, she nodded. “Okay. Sorry.” She turned and went back into the clubhouse. – Kindle location 1222

Of course, he’s interested. And soon after, he makes a move. Showdown and Shannon’s love story develops at a very slow pace. He thinks he’s emotionally dead, but she offers herself to him, and the more he knows of her, the more not just his libido, but his emotional self awakens. He begins to see that he has things to live for.

There are things that I really enjoyed about this story. I thought that Showdown’s emotional growth, from angry, emotionally unavailable man to one who is able to love was credible. Given that I’d gotten to know him in the previous two books and certainly, read the horror of the last book, I was glad to see him find some happiness. Shannon was a bit harder for me to get a bead on. She has a secret, and is technically running, although you never made me invest in what she was running from. I think because you delayed too long in delivering the backstory on her. Her conflict seemed manufactured because it arrived so late in the story and you’d built little to no foundation for it. So I wasn’t invested at all in that aspect of the story’s resolution.

That being said, I read the book in one sitting, and enjoyed getting to see the characters in a situation that was much less horrifying than book 2. As in the previous books, the sex scenes are plentiful and hot. And in the end, I was glad for having spent time reading the book. My hope in reviewing this book is that those who were put off by the extremity of the last book will give your work another chance. Because I felt like this story had potential and delivered on a good portion of it. I’d definitely read more from you. Final grade: B-/C+