REVIEW: Into the Lair by Maya Banks 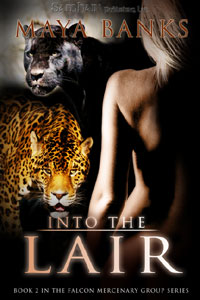 Thank you for sending me, Into the Lair, the second in the Falcon Mercenary series.   It might surprise you want I liked and didn’t like about this story.   Into the Lair takes up where Into the Mist left off by following shapeshifting brothers Ian and Braden as they hunt down the sister of their former team member. Gabe betrayed them and nearly killed them but all was forgiven when they found out these actions were taken to save his sister, Katie.

Ian and Braden head out to find Katie while struggling with their new shapeshifting skills.   The brothers were exposed to a chemical which affected their genetic makeup forcing them to change into animals at inconvenient times.   Ian and Braden fear losing control over this and have taken, at the advice of a medical doctor who is part of their new paramilitary/mercenary team, to injecting themselves with sedatives.   The fear is that the beast part of the men will overtake them to the point where they are savaging anyone who comes across their path, be they friend or foe.

I think you signal fairly early on how Ian and Braden can come to grips with their changes and because it seemed so obvious to me, I was a bit impatient for them to catch on.

Katie got caught up with a bad crowd and ended up endangering her life.   Gabe, her enigmatic brother, has taught her some survival skills which she puts to good use when Ian and Braden show up.   Believing them to be dangerous to her, she fights when she can and runs when necessary.   The problem is that the bad crowd that led Katie into trouble in the first place is still after her and she can’t really evade both the bad guys and Ian and Braden.

This is a threesome, if the readers hadn’t caught it yet, and it was handled in a little different manner than in the past.   The brothers have engaged in sharing in the past, but it’s not something that irrevocably binds them, makes them whole.   Instead, it seems more of a kink thing for them in the past and with Katie, it’s an imperative because they both have these feelings for her and rather than make her choose, they’ll sacrifice and be with her together.   It’s an interesting concept (and one you explore more fully in your November Berkley release, Be With Me).

I ended up skimming some of the sex scenes particularly after the one in which the heroine, having been knifed brutally in the stomach, gets some stitches and then gets it on with the brothers.   My suspension of disbelief needle got broke on that.

The worldbuilding was intriguing and I thought that there was a nice effort to make the villain a little less of a caricature, although I wondered if it would have had a greater emotional impact had we known more about the bad guy earlier. I also wondered why the individuals turned into the various animals – what was the story behind that? I do think a reader could pick up Into the Lair without the first book but will want to read Into the Mist after this book. B-