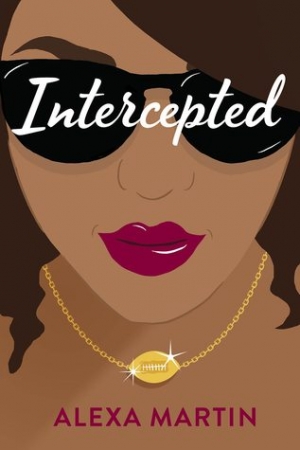 Marlee Harper is a biracial woman living in Denver with her NFL-player partner, Chris Alexander. Chris and Marlee have been together since she was sixteen and they were both in high school together – which perhaps explained a little of why she stayed so long with him. Chris does not present sympathetically at all. He’s self-absorbed and childish, expecting Marlee to drop everything for his man-tantrums when he has a bad game or something else in his life doesn’t go well. She has been waiting patiently for a wedding ring and wondering whether it will ever come.

The other members of the Denver Mustangs, the fictional team around which this book is built, are mostly married. Or at least, in terms of long-term relationships, there are wives and there is Marlee. She is the only girlfriend in the group. I gather other players may have casual relationships but those women aren’t part of the team and they certainly are not part of the “Lady Mustangs” the charitable WAGS (but mostly W) group which supports various good causes in the local area. Apart from Naomi, Marlee’s best friend, who is married to another Mustangs player, all of the Lady Mustangs are terrible, awful people. I admit I had some discomfort with just how many bitchy women were portrayed. I know women can be terrible people but the sheer volume of them in Intercepted was a thing to behold. I expect for some readers this will be a dealbreaker.

Quite soon in the story, it becomes apparent that Chris and Marlee have split up from time to time in the course of their relationship, largely due to his cheating ways. The previous breakup was four years earlier and in that time, Marlee had a one night stand with a hot guy in Chicago. She thought he was an investment banker (he told her he was) but in the morning when she awoke, she saw all of the football memorabilia and paraphernalia which pegged Gavin as an NFL player and she bolted.

Gavin Pope previously played football in Chicago but has been brought in to the Mustangs for a year to replace the quarterback who has not been performing well. Chris is angry about this because the previous quarterback often threw him passes and he will have to try and build a relationship with his new guy if he wants to shine. Marlee is horrified for entirely different reasons of course.

Very soon after Gavin joins the team, Marlee discovers that Chris is still cheating on her and she leaves him. Gavin quickly makes it clear that he remembers their one night together and he’s interested in getting to know her and picking up where they left off.

While I had somewhat mixed feelings about Chris and Marlee being together at the start of the book, the fact that they were gave the opportunity for Gavin to say this:

“I can take you if you need a ride,” says a new, deep voice. And with one short sentence, the smile is long gone.

Chris told me last night that Gavin was coming over to go over some plays with him, but I guess discovering years of betrayal caused me to forget. Clenching my eyes shut, I send up a silent prayer Gavin cancelled and it’s another person witnessing this personal low point in my life. My hands stay frozen in my bag, like maybe if I make no sudden movements I’ll be able to vanish into thin air. I turn as slowly as I can to identify our new guest.

When I manage to convince myself to open my eyes, my gaze is met with Gavin’s hard, angry one before he shifts it to Chris. Even though I’m standing still, I can’t get my breathing to slow down.

“No. She’s not going to burden my boys with her shit.”

“You’re not my boy, Alexander. And this shit you’re pulling right now is why you never will be.”

and therefore all was forgiven.

In some respects Chris was a bit of a caricature because he was just so awful I did wonder why Marlee had put up with him for so long. In contrast (but even without that contrast to be honest) Gavin is a dream. He’s respectful, helpful, kind, generous, thoughtful and sexy.

“So, what do you say, Miss Harper? Are we going steady now?”

He doesn’t say anything to my answer. Instead, he saunters across the room, his gorgeous manhood swaying between his legs with every step until his gets to the edge of the bed and climbs over me.

“What are you doing?” I ask when he starts moving down the bed.

“Giving my girl a kiss.”

“But my head is up here.” I pop up on my elbows, watching as he pulls the comforter from my stomach.

“I’m kissing a different set of lips.” He says and punctuates it with his tongue dipping into my core.

“Holy shit,” I whisper to the ceiling. “I love being your girlfriend.”

And the vibrations from his quiet laughter between my legs only make me like it that much more.

(That hashtag up in that quote? Readers will want to get used to it because they’re all through the book. Marlee hashtags her life. #Dial69ForYeeeesssssss #Touchdown #ShortPeopleProblems etc etc. I admit I favour the less is more approach to such things. At times I found them amusing and cute but other times they were just annoying. #FirstWorldProblems)

Gavin initially oversteps a little with some over-protectiveness and Marlee pushes back on it. I actually liked Gavin stepping in and putting Chris in his place but I also understood that Marlee wanted to fight her own battles and wanted to ask for help rather than for Gavin to just roll right over her.

Gavin is open about his feelings and he is all in very quickly. In many ways he is the epitome of the fantasy boyfriend.

“Oh, and also, I love you.” The words come out quietly, but I don’t need him to yell it. The power, the sincerity, is enough to knock me over. “I know this is fast, and I don’t expect you to say them back. But I know, without a doubt, what I’m feeling for you is love. I’ve had girlfriends before and I’ve never felt an ounce of what I feel for you.”

I was here for it.

“That was so much better than calling me a sexy rhino,” I say and watch his dimple appear.

I had a bit of trouble working out the passage of time in the book. That may have been an issue with the arc however. The section breaks were not clear – between one paragraph and the next days might pass and there was no visual cue for me to help me realise that one scene had ended and another was beginning. There were also some continuity issues. For instance, Marlee makes a killer red velvet cake and a great lasagne at the beginning of the book but later she says she can’t cook and doesn’t like to.

Some of the obvious things I expected didn’t happen and for that I thank you. Up until right near the end, Gavin was a prince among men. But then he does something which felt entirely out of character and I was left confused. It felt to me like there needed to be a reason for the obligatory black moment rather than that the story had been setting things up for what happened. And I can’t say I was entirely satisfied with the resolution. Marlee ended up side-stepping the main conflict entirely in my view. Perhaps that’s because there wasn’t really a happy resolution to be had by doing otherwise. At least, not that I could see.

There was also a bit in the book where Marlee met Gavin’s family and something that happened there confused me a little too.

There was an author’s note in the front of the book which referenced “KA” and while I could be wrong, it seems to me that you were referencing Kristen Ashley. I did detect some homage to her work in the course of the book – especially later when Marlee tells Gavin she was unable to interpret the meaning of his “babe” and in passages like this:

This is the first time I’ve seen her since she info-dumped my life to all of the crazies on the internet, and I’m pretty sure if she said something snotty to me right now, I’d ninja leap over the table and kick her in the face.

Disclaimer: I don’t know how to ninja leap, but I feel like it’d just come to me.

For the most part the writing was clever and engaging, with plenty of humour and apart from all the hashtags it worked for me. However, some of the tropes used felt a little tired and I didn’t understand and did not like Gavin’s actions toward the end of the book (he’s not a cheater readers, no fears on that account). As much as I had liked him up until then my belief in the HEA was a little shaken. The epilogue went some way to relieving my fears however.

→ Kaetrin
Previous article: DAILY DEALS: Contemporaries for the weekend
Next Post: REVIEW: Angelique and the Pursuit of Destiny by Alicia Cameron