REVIEW: In the Absence of Light by Adrienne Wilder 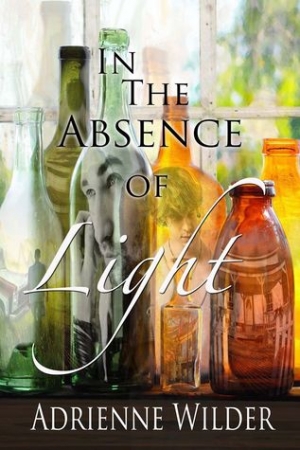 For years Grant Kessler has smuggled goods from one end of the world to the next. When business turns in a direction Grant isn’t willing to follow he decides to retire and by all appearances he settles down in a nowhere town called Durstrand. But his real plan is to wait a few years and let the FBI lose interest, and then move on to the distant coastal life he’s always dreamed of.

Severely autistic, Morgan cannot look people in the eye, tell left from right, and has uncontrolled tics. Yet he’s beaten every obstacle life has thrown his way. And when Grant Kessler moves into town Morgan isn’t a bit shy in letting the man know how much he wants him.

While the attraction is mutual, Grant pushes Morgan away. Like the rest of the world he can’t see past Morgan’s odd behaviors

Then Morgan shows Grant how light lets you see but it also leaves you blind. And once Grant opens his eyes, he loses his heart to the beautiful enigma of a man who changes the course of his life.

I read and enjoyed a few of your books before, but I will be honest – I hesitated to buy this one. I am all for characters with disabilities starring in romances, but I am starting to feel that autism is becoming “in fashion” to have for a romantic lead and I worry about it becoming a trend. I worry NOT about having a romantic lead with autism but about the sensitivity of the portrayal. I caved in and bought the book because my book buddies at our Amazon group loved it, but I am still not sure what I think about Morgan’s portrayal. Once again, I am looking at this as an outsider. I read the books, I watch the movies, but I do not have a loved one with autism, so take everything what I write with a huge grain of salt.

Morgan has a lot of autism related issues – the blurb describes it correctly – but he has beaten a lot of odds.  He manages to have an independent living and he communicates well, he works as a busboy and he has accomplished a lot of things that doctors told him and his adoptive mother he would never be able to do. Trauma/stress causes him to shut down, and a couple of times in his life people around him thought he wouldn’t come back from that, but he did. I appreciated that the author stressed many times that Morgan lives on the edge of a metaphorical prison, fighting for control of his body every day, and he does not always succeed, but he has succeeded in so many ways.

“Morgan lives every day on the edge of prison. He’s helpless against his body and mind, and he has to fight continuously not to drown. So he seeks control in everything from how he arranges his food, to riding his bike to work. Even those kinetic sculptures he builds is his way to control the light inevitably controlling him.”

I liked that the book also stresses that Morgan’s success does not happen often.

“Because love has nothing to do with it. If it did, every autistic child on this planet would excel like Morgan. The truth is, most don’t. Every instance of autism is different, and Morgan is a very rare case amongst a whole lotta other cases”.

What I am trying to say here is that for the most part I accepted Morgan’s portrayal (whether those who have more knowledge than I do will do the same I have no way of knowing), but there was one thing that I was wary of. As I stated before, Morgan is special because of how much he achieved in life, but I felt that the author wanted to give him more specialness because of his condition. Oh this is only my interpretation – the book tries very hard not to do so, but Morgan has psychic insights, even though he is not psychic, because apparently because he is special and different. Grant seems to say all the right words, that Morgan is a man with mental condition, not mental condition who is a man. However, what is this for example?

“Morgan isn’t psychic, he just sees things most people don’t or sees things in a way we don’t or can’t. He told me the guy needs someone to trust. He also said you two would be good for each other”.

Without giving out spoilers, I can tell you that Morgan *never saw* this guy who apparently needs somebody to trust – he just figured out that the guy was in the car, which was about to leave. So, how does Morgan know that? Does his autism make him psychic after all? I did not like the attempt to make him extra special, I thought he was special enough, complex and interesting, he did not need an *extra cookie* so to speak. By *extra cookie* I mean that the author wants to give a character who has suffered before some extra reward. I usually find it unnecessary, and this book was no exception.

Grant was an interesting character.  While I thought that his self-awareness improved greatly in his romantic life, I thought he still lacked it as to his “professional life” or as I would prefer to characterize it – “life as a gangster criminal”. Grant’s business was shipping stolen goods from one party to another and he seemed to achieve a lot of wealth through his profession. But Grant believes he had ethics, because he never shipped people or drugs and never did any money laundering. However when his “business associates” changed the ways they did business, by becoming quick to kill people whom they did not want to do business with, Grant got out and left. Hey, one would think that means Grant never killed a person before, right? But of course he did – only when it was absolutely necessary for his survival according to him.  When the business is not going in the direction Grant wants it to go and FBI wants things from him, Grant decides to retire and comes to small town called Durstrand. He is not planning to stay permanently, he will just wait till the dust settles and then he will find himself a nice beach and settle down. But in this town Grant meets Morgan and all his plans eventually change.

I thought that as a romance this book was as close to perfect as they come – Grant and Morgan’s relationship develops slowly and cautiously, starting with good deal of misjudgment on Grant’s behalf and understandable hostility from Morgan, but transforming slowly and passionately into an amazing love story. I really liked the use of language in this book – sometimes it felt like poetry, but not like purple prose at all.

Both men have to learn to trust in themselves and each other – that being with each other is what they want and to give their relationship a chance to grow. As I said romance worked very well for me. The book was primarily a romance but it also had a suspense storyline – obviously when one moves away from fellow gangsters and the FBI wants things from you, they are not going to leave you alone. I thought the suspense was pretty well done – it was hanging over Grant’s head during the whole book, and when it finally exploded most of it made sense to me.  There is some violence in the last twenty percent of the book. I said that most of it made sense and it did, but there was one twist which confused me a little bit.

I liked that the book managed to infuse some humor in the story. There were happy cows for example ;). You have to read about them, trust me on that.

“Is this a drive –in theater?”

“I know Durstrand is fifty years behind, but this is a little rural even for them.”

“Wasn’t built for the townspeople,”

“They like to watch movies, makes them taste better.”

Jeff started to say something, but I shook my head. “I’ll explain better, when you have more time to talk.”

I also saw some typos, which usually means you guys will see more than I did.