This book came to my attention when it was listed as one of PW’s romances of the summer.  Fortunately the book was on NetGalley and I was able to download and read it straight away.  Interestingly, this is the second in the Black Knights Inc. series but it is the first that I read.  It is fun and filled with action and for fans of the friends to lovers trope, this delivers a sexy and believable romance.  The downside is that we spend more time with the characters’ emotional backstory than the developing romance. 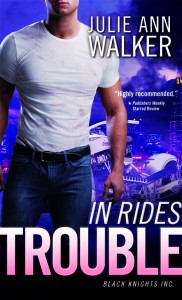 Three and a half years ago, Frank Knight showed up on Becky “Rebel” Reichert’s doorstep wanting to use her custom motorcycle fabrication business as a front for a special operatives team that sometimes contracts with the U.S. Government.  From the beginning Becky developed a huge crush on Frank that she believes is unrequited.  Frank knows better. Not only is it not unrequited but he’d like to meet every heated stare of Becky’s with reciprocal action.

Standing in the way of their romance is Frank’s own personal sense of propriety.  Becky is his business partner, the little sister of one of his best operatives, and far, far younger than Frank.  (He feels “like he was just one step away from Metamucil and Viagra” and has to pop Iboprofen tablets like a kid at the pool eating candy tarts.

His resistance crumbles after Becky’s life is placed in danger while she and her wealthy best friend, Eve, are vacationing in the Seychelios waters and taken captive by pirates. The first half of the book involves the pirate rescue and the second half of the book is concerned with the ongoing threat to Becky’s life after the rescue.  The book moves by speedily, interspersed by humorous dialogue, Frank’s impending heart attack (and by that I mean he’s going to give himself a heart attack being so wound up about Becky’s safety), and Frank’s teams’ interaction.

I loved Becky. She is a fun, confident heroine.  She runs a successful business, competing in what is traditionally a male dominated business environment.  She commands her own against the team of toughs that run around her shop.  She’s not afraid to pursue what she wants.

Your welding is complete crap,” she said, running a finger along a weld he’d thought was actually pretty damned good. “But it’s obvious you’re a decent mechanic, and that’s really what I need right now, more decent mechanics. Plus,” she stood and winked, “it might be nice to have a big, strong dreamboat like you around the place day-in and day-out. Something fun to look at when my muse abandons me.”

He opened his mouth… but nothing came out. He could only stare and blink like a bewildered owl.

He was saved from having to make any sort of answer—thank you, sweet Jesus—when Bill grumbled, “Cut it out, Becky. Now’s not the time, and Boss is definitely not the guy.”

Frank as the old soul he feels like he can’t tie Becky down with a pain ridden old soldier is her perfect contrast.  Whether the book portrayed the military tactics used by Frank and his team accurately is unknown to me. It felt authentic which was sufficient.  None of the believability issues that plagued the first book or the extreme dialect that plagued the first and third books existed here. Becky has conned most of the team into teaching her operative tactics such as fighting, hacking, and mission planning.    During one scene, Becky tries to balk at doing something Frank commands and her brother, Billy, tells her that being an operative means taking orders.

I did wish that I could have seen the two fall in love, but that takes place in the three and half years that exist off paper between the prologue and the first chapter.  Instead, we are treated to several hundred pages of Frank denying himself and Becky wanting what Frank refuses to give her.  Becky’s static behavior toward Frank belied her initial gumption.  She wasn’t afraid to proposition him but she either didn’t read him well or refused to take more of the initiative.

The secondary plotline involves Billy and Eve who apparently shared a past romance but Billy broke it off because of Eve’s money and upbringing or so we are led to believe.  In Ride’s Trouble is a fun and fast action story that could have used more internal focus but was still a good read, particularly for those who enjoy the military suspense type love stories.  B-