REVIEW: In Pursuit of a Scandalous Lady by Gayle Callen 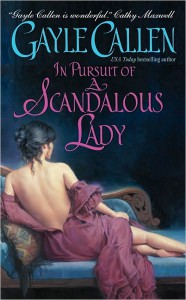 I admit I never thought I was going to make it out of the first chapter.   The setup was so farcical.   Three friends are in a gentleman’s club where a nude painting is hung. The nude is said to be of a lady of a ton. Conveniently three young men appear in the club when all the other members are gone and all the servants are to bed (in a gentleman’s club?) and try to steal the painting. The three friends catch them and find out that the three young men are actually women.   The three young woman play Spartacus and all declare the nude body is theirs.

The three men know the three women.   In  fact, they are friends with the brother of two of the women.   Says one of the gentlemen:

Rebecca, Susanna, your bother is my friend.   He has helped me in so many ways I cannot recount them all.

Yet despite this brotherly devotion, the three gentlemen make a wager amongst themselves that they will discover who is the model for the nude painting.   Further, they make lewd comments toward these women:

“We could settle this right now,” Leo responded.   “You could each remove your clothing and let us see the truth.”

Sure, because this is how all honorable men treat the sisters of friends who have helped in so many ways that they cannot be recounted.   Why not take the painting down? Why not, as a favor to said friend, try to insulate these women from further scorn and humiliation and shunning?   Why try to portray these men as honorable when their initial actions show them anything but! They are wagering on the honor of these young women.

If a reader can get past the cliched and gimmicky setup that paints all three men in an unfavorable light, there is actually a decent historical romance going on.   Rebecca Leland,   cousin of the Duke of Madingley, grew up under the specter of possible death.   She was a sickly child, cosseted, protected but highly constrained.   As an adult, out from under the worry of illness, she is determined to live life to the fullest.   She acts with a certain sense of physical and emotional invincibility, unafraid to show her feelings and act on them.

Julian Delane, Earl of Parkhurst, spotted Rebecca wearing a jewel called the Scandalous Lady.   The nude in the painting also wore the jewel.   Julian believes that Rebecca is the model and wants the jewel for it went missing 10 years ago under a scandal that resulted in Julian’s father’s death.   But a mystery surrounds Rebecca’s possession of the jewel as she was in the schoolroom ten years ago.   Rebecca and Julian find themselves forced to work together to solve the mystery.   Most of the book is essentially a road romance.

Rebecca is a delight.   She was mischievous and full of zest for life.   Everything is an adventure for her, an opportunity.   Rebecca teases Julian throughout the book:

“Lord Parkhurst, you’d best be careful.   You may not be interested in marrying me, but we’ve both been seen takling to each other’s mother.   To the ton, we’re practically engaged.

He only gave another grunt, and took her through a particularly tight turn.   To her surprise, his thigh dipped between hers, so gracefully she thought she’d imagined it…Then he did it again, deliberately, provocatively.

…   He knew what he did to her.   It was unfair that gentlemen were allowed so much more experience than the ladies.   It put her at a distinct disadvantage.   All she had to counter him were her wits.”

And when Julian balks at taking the relationship to the next level, Rebecca is fearless in her determination to change his mind.   Sexual tension is employed well throughout the book.   Julian and Rebecca are forced to share a bed and they employ the bundling method.   This intimacy leads to them sharing secrets with one another and their divulging of their past illuminated their motives in a very natural way.

While I totally thought Rebecca was a joy to read, Julian was so stiff as a character. I understand that this was intentional but his internal monologue was so wooden that it made him plastic at times.

The setting is mid Victorian and there was good use of the time period with reference to trains, factories and other cities outside of London. Most of the story takes place outside the insulated London society and whether these characters acted with historical accuracy, I can’t say. I know my eyebrows were raised from time to time, but I let it slide.

There were questions I had in the book such as when the two were out of money why they didn’t go to a bank; why other men in society didn’t make the same connection between the painting and the jewel; and why, why, why the ridiculous beginning?   But, Rebecca was   such a joy that I was able to put aside the setup and enjoy the story.   B-

This is a mass market published by Avon, one of the agency 5. The official release date is April 27, 2010.

→ Jane
Previous article: “Blame it on Paris” promotional giveaway!
Next Post: REVIEW: Sold to the Highest Bidder by Donna Alward