REVIEW: In Bed with a Highlander by Maya Banks 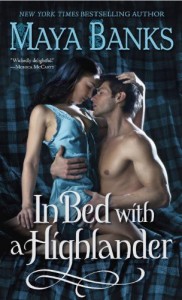 In Bed is the story of Mairin Stuart, bastard daughter of now-dead King Alexander of Scotland. She’s been hidden away in a convent for the past ten years to keep her safe. Her father bequeathed a large tract of land to her and so whoever marries her will inherit. This makes her a prize, and one unscrupulous laird steals her from the convent, intent on making her his bride. Mairin escapes his clutches and ends up in the arms of Ewan McCabe, a rival laird and the hero of our story. Ewan finds out Mairin’s parentage and so to keep her safe, and to keep her inheritance in his grasp, he marries her. Soon enough, Mairin is trying to make her place in McCabe’s clan, and all the while her life is threatened by mysterious saboteurs.

While this book started out strongly, I had some real concerns. I’m one of those people that likes historical accuracy. I’m not saying that every cup, cheese, and type of fabric must be historically accurate or it drives me insane, but I have read enough historicals that I know the basics. I expect you to know the basics, too.

This book? Not historically accurate in the slightest. A specific year is not mentioned in the story, but it takes place about ten years after King Alexander of Scotland is dead, and King David is on the throne. A quick check on wikipedia shows that this is likely close to 1134 Scotland. Okay. That’s about as close as we come to historical accuracy, however. The highlanders in this book dress in ‘colors’, and they wear braids in their hair like Braveheart. All the highlanders live in stone castles, which weren’t really common at that time in history. There’s a castle ‘skirt’ mentioned repeatedly and I’m not really sure what that is. I couldn’t find it on google or wikipedia anywhere.  At one point, the heroine puts on a dress with the hero’s coat of arms. There are modern phrases and dialogue peppered everywhere.

I must therefore conclude that this is taking place in fantasy Scotland. You know, like the place that Julie Garwood’s Scottish historicals take place. Several of the reviews on Amazon commented on how much this felt like a Julie Garwood book, and I have to agree.

If the plot and setting sound like they’re straight out of the Julie Garwood playbook, that’s because it felt like it too. The dialogue was patterned after Julie Garwood books (“twas the truth” and characters saying “aye” to themselves repeatedly). The historical accuracy feels the same. The plot feels like a mix of ‘The Bride’ and ‘The Secret’. After a while, it bothered me because it felt more like a creative reimagining of Julie Garwood than Maya Banks.

The heroine was grating at times. She’s a “so innocent but charming” heroine straight out of Garwood territory. She has an ‘adorable’ habit of talking to herself internally, except she’s actually blurting the words out loud. And like Garwood heroines, she’s a martyr who gets beat up repeatedly for the sake of plot and for the hero to realize how precious she is to him. At one point, she’s shot by an arrow and doesn’t realize it. How can you not realize you are shot by an arrow, I ask? It doesn’t pass right through the body – the fletching gets in the way of that sort of thing.

This sounds unfair, but Banks does a lot of things right in this book. It’s a light, fun historical. I found myself smiling at some of the dialogue. There’s no brogue, so if that drives a reader away from a lot of Scottish historicals, she might like this. The heroine grows into her sexuality and once she realizes that she can play with the hero as much as he wants to play with her, it’s fun to see them get together. The steam in this book is at a much more subdued level than most Banks’ books, so don’t expect anything outside of the normal historical romance mores.

The middle slumped to the point that I wondered if I’d be able to finish the book – it all felt like something I’d read a hundred times before – but the ending picked up nicely and the sequel for the next brother’s book is set up in a good way.

All in all, unoriginal but pretty fun. A grudging B-, maybe closer to a C+.