I haven’t been a faithful follower of the Demonica series, but I’ve read several. Having some knowledge of the world helped ground Immortal Rider but I did wonder whether readers who entered at this book or its predecessor would be a little lost. Immortal Rider is the second in the “Lords of Deliverance” series. The premise is that there are four horsemen, three brothers and their sister, and so long as their Seals remained unbroken, the end of the world can be prevented. However, the first seal of Reseph has broken and his evil soul has overtaken the good soul and he is now known as Pestilence. He is actively working to break the seals of his siblings and bring the scourge of evil down to earth. 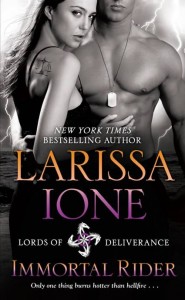 Limos is a powerful and sexy horseman who has been claimed to be Satan’s bride. Her curse is Famine.  As long as she doesn’t make The Dark Lord jealous, she avoids being captured in Sheoul, or her Seal is intact, she can avoid her wedding in hell and her part in bringing on the end times. In a playful tussle at a backyard barbecue with Arik, a human, they kiss and Limos’ sexual response begins the unraveling of the Seal and the curse. (I am by no means immune to snickering to myself that the horsemen’s “seals” have to be broken like a hymen, added to this that two of the horsemen are virgins, this likely intentional joke is meant to induce snickering). Arik is sent to hell whereupon he is tortured on a regular basis. Once he screams Limos name in pain, she will be whisked down the aisle.

Limos’ only other problem is that she is addicted to lying. Seriously addicted and if she can’t break the addiction, she will break her Seal. “With every lie you tell, your addiction to it will strengthen, and with every lie, evil will grow within you, until you want to go to your husband.”

This high adrenaline story with over the top emotions, over the top circumstances, and improbable sakes which can really only happen in a paranormal. The sexual tension plays an important part but it’s a plot driven story as each party is involved in making bad bargains and double crossing each other in hopes of achieving their end goal. The humor is primarily juvenile banter and insults such as when Arik calls Limos “My Little Pony”. (probably my very favorite insult of the book).  The union of Limos and Arik seems impossible, first because of Limos’ need to lie and self destructive nature and then because Limos’ hell imposed chastity belt prevents any physical consummation.

Limos is a complicated character. She struggles against her evil nature of lying, deceiving, self destruction. She hates herself and is convinced that doom is just around the corner. Yet she acknowledges that mortals and their devotion to each other, their ability and willingness to love her and accept her despite her flaws is so compelling that eventually it overcomes the evil. It’s truly a good triumphs over evil storyline.  I also appreciated the evenness in which the characters were presented and how Arik had to confront his own propensity for lies of omission he told purportedly to shield those he cared about.

The worldbuilding rests primarily on prophecies and people and while references mankind has little to do with mankind. The lack of grounded worldbuilding makes the boundaries too malleable for my taste. While the overriding theme to these books are that the impossible prevents the couple from coming together, the impossible is always overtaken and thus whatever urgency exists is false.

While there are scenes between Limos and Arik, the underlying focus is propelling the series arc. For instance, there is a great deal of setup for the next book featuring Regan and Thanatos. A prophecy is discovered that implies even of all four Seals are broken, a “child conceived by the joining of an Aegis warrir and a Horseman. That child will be the savior of mankind.” Regan must go and get pregnant by one of the Horsemen and the Aegis, the purported good guys, pick Thanatos as the victim.

There are many scenes from Pestilence’s point of view, providing glimpses that the good man inside him is not entirely snuffed out and laying the basis for his redemption story.  Sometimes I felt that the story went too far over such as Pestilence orgasming at his twin brother’s pain.  Thanatos describes their closeness thusly “We shared a womb. We shared battle, pain, loss, and drink.  He is my brother.”  And then in regards to the rape at the end of the book involving Thanatos.

[spoiler]Regan goes to Thanatos, flirts with him and tries to seduce him but he remains resistant.  Pestilence drugs Thanatos favorite mead believing, like Thanatos, that the Seal will break when he gives up his virginity.  Regan is on top of Thanatos and her power is holding him down. He canot get up and cannot throw her off.   He’s going out of his mind with lust but when he feels his twin souls starting to fight, he knows he must stop. He tells her to stop, to get off him, but she ignores him.  He keeps telling her to stop but she won’t and she comes and he orgasms inside her.  Thanatos is written as physically enjoying the released, but rape is about power and it must be exponentially more terrible to be powerless to stop not only the physical reaction.  This is the aftermath.

“Sex?” he roared, startling her into taking another step back. “That wasn’t sex. You tricked me. You drugged me and defiled me. Do you even know what you did?”

She thought her eyes might have popped out of her head. “Defiled you? Are you kiddin me?”

“I told you no. I refused.” The tendons in his neck strained as he tried to lift his head. “You… violated…”

His voice degenerated into a nasty growl. “You took my virginity”

His black expression said he wasn’t, but virginity? No way. Ridiculous.

No. Don’t do this, Regan! His pleas came back to her, ringing in her ears with deafening clarity. He’d told her to stop, but … no he hadn’t meant it.

He couldn’t have meant it.

He lay there, chest still heaving, raw hatred gleaming in his eyes. A trickle of sweat rolled down her temples as seh replayed every second of the sex. She’d though his protests were token, but if he really had been drugged with win, and her ability had attacked him, holding him down while she…. Oh, god.

“I’m saying she drugged me. And…” Humiliation shrank his skin. “She took me.”

That scene which happened in the latter third of the book was terribly disturbing.  The way in which the one character so blithely dismisses her actions.  Let’s review.  She is there to steal his sperm. In order to do this, she must take his virginity. He is actively resisting.  I just didn’t understand why we went here.  What was the point of this? Is it supposed to be reversed feminism? I.e., a blowback against all the bodice rippers of the 80s?  It was over the top and an example of going too far, in my opinion. I’m not saying that the scene glorified rape but Thanatos is written as clearly enjoying being forced, against his will, while drugged, to have sex with another who will be his heroine.

I looked at other reviews and no one else is at all bothered by this (or at least I didn’t see any reviews that suggested that this was a problem) so perhaps I am totally misreading this?

The part of the story involving Arik and Limos was sexy, interesting, although a bit drawn out.  The parts involving Regan and Thanatos had a lot of promise but the ending left me with a very bad taste in my mouth.  The entire storyline of Regan going in to steal Thanatos’ sperm was offputting enough.  I struggled with the grade for this book.  Until the last third, I would have given this book a B-, but the last third was troublesome.  Ultimately I am going to go with B- but with a strong advisory about the last third. Beware, triggers galore.