For many months, Jane had been talking about how wonderful your first New York Blades hockey Romance, Body Check, was. When I finally succumbed to reading it, I was elated with almost everything about it. I especially loved the set-up between the taciturn hero and the career-minded heroine. After reading Gina and Michael's story (Fair Play), I have skipped ahead to Icebreaker, anxious to check in with previous characters and discover new ones. And while Icebreaker didn't thrill me the way Body Check did, it was still an enjoyable read. 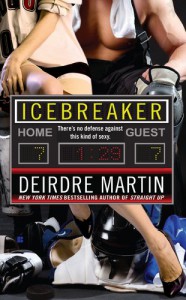 Sinead O'Brien had worked extremely hard to become the only female partner at her law firm, and if she had to sacrifice time with her family and even a husband who wanted her to be a traditional wife and mother, it was going to be worth it in the end. She did not mind the long hours and ever-growing workload, because she was passionate about her work and good at it, to boot. Still, she felt a little bit of jealousy whenever she saw her infant nephew, Charlie, because she did want a family of her own – just not on anyone else's unilateral terms. The distance this has caused between Sinead and her sister Maggie is one more thing Sinead needs to deal with . . . later.

Recently acquired New York Blades captain Adam Perry is known as "a man of
few words who only spoke when necessary," and a hockey player who is master of the old style "open-ice body check," a move that has become less and less common, especially with the league encouraging players to promote a more family-friendly game. When an ambitious district attorney decides to bring assault charges against Adam for injuries sustained by a player whom he body-checked during a game, the Blades hire Sinead's law firm to defend Adam and ideally get the charges dropped before trial.

Sinead is not unusually concerned about her case until she meets with Adam Perry and encounters the brick wall of his aloof resistance to her questions and, more importantly, to revealing anything about his personal life that Sinead might need to mount a defense, should the case go to trial, and, in the meantime, anything she might be able to use to get the charges dropped. Adam is similarly frustrated with Sinead, a woman he correctly pegs as completely ignorant of hockey. Besides his general disgust with the DA's obvious attempt to criminalize the game of hockey, he does not have a great deal of confidence in Sinead's ability to comprehend the importance of the game that has been his life since childhood:

"Tell me in your own words what happened on the ice with Nick Clarey."

"We were playing Philly, and I made a hit on Clarey. Philly released a statement saying Clary was concussed and had a fractured cheekbone. I was suspended for two games. The next day I found out I was being brought up on charges of assault causing bodily harm. Kidco has hired you to defend me."

Sinead waited for more, but after a few seconds, she realized that was it, that was all he had to say. He's a caveman, she thought. A simpleton.

"Could you elaborate a little?" she prodded.

"Do you and Clarey have a long-running, acrimonious relationship?"

"Was he trash-talking to you or doing anything to incite you?"

"How did you feel when you saw what your hit did to Mr. Clarey?"

Adam looked baffled. "How did I feel?"

"Let me rephrase that," said Sinead, since feel clearly wasn't a word he was comfortable with. "What did you think?"

"I felt sorry when I saw he was hurt. I hoped his injury wasn't severe. That was never my intent. But I knew it was a clean hit. We're professional hockey players. He was doing his job. I was doing my job. End of story."

"Except it's not the end of the story, because you're now being charged with assault. Tell me about "your job,' as you call it."

Sinead closed her eyes for a split second, trying to ward off the frustration building inside her. "Elaborate."

Adam looked genuinely perplexed. "What do you need to know?"

What we recognize early on is that Sinead and Adam have a great deal in common, particularly their unerring focus on career and a punishing work ethic, and it is, ironically but expectedly, these commonalities that make their initial acquaintance so rocky. Sinead is so focused on what she needs to know as a lawyer that she makes assumptions about Adam that are untrue (that he's stupid and recalcitrant). And Adam makes incorrect assumptions about Sinead, as well (that she's an uptight bitch). When he discovers that Sinead plans on visiting his Canadian hometown and interviewing his brother and other family and friends. Adam is extremely unhappy, although Sinead does not understand why, when the more information she has, the better she can defend him. However, once she visits his hometown and meets his brother, sister-in-law, and best friend, Ray, Sinead realizes that there is a great deal more to Adam Perry than he likes people to believe, and while much of it raises her estimation of his character, some of it might be damaging to his defense.

Although I have only read three of these New York Blades books, I already recognize a pattern in the relationship development: two stubborn, independent people meet and rub each other the wrong way; attraction wars with seeming dislike until it tips the characters into a tentative relationship; crisis occurs that break the couple up; a tentative reunion ensues that deepens the intimacy and therefore scares the hell out of the characters; which leads to another breakup; followed by the final, full-of-emotion reunion and HEA.

As a fan of both New York hockey and the law, and understanding a bit about the difficulties inherent in both, I appreciated some of the issues this couple has to contend with. First is the fact that both have had to sacrifice quite a bit to be successful, and both are sort of loners, despite the close family ties they both have. Both are reluctant to reveal too much of themselves and become vulnerable. Sinead, for example, is resistant to talking about her ex-husband and the issue that broke them up, namely that he expected her to stay at home and raise any children they might have. Adam is reluctant to talk about most of his past, and he is protective of the people in his life, and humble about his off-the-ice accomplishments.

Then there is the issue of Sinead's professionalism with regard to sleeping with a client. Although New York does not have an ethics rule against this (yes, I checked), Sinead knows that as the only woman partner in her firm it is much, much riskier for her to sleep with a client than it is for her male colleagues, who regularly indulge without qualm. In fact, her best friend, Oliver, has made a virtual avocation of sleeping with his female clients, and he regularly shows up to the office disheveled and hung over. It is a sad fact that the law remains a male-dominated, highly patriarchal profession, in which women do face various forms of sexual and gender discrimination. I liked that Sinead was aware of that and that the novel took that issue seriously. I also appreciated that Adam's dedication to hockey was treated with the same seriousness, that his "job," was, indeed, portrayed as inclusive of substantial responsibilities.

What worked best for me in the novel was the struggle that these two independent characters go through to become a couple. One of my favorite things about all three Blades books I have read is that compromise is an ongoing process and traditional roles are not reinforced when the characters do not fit within their narrow confines. In fact, despite my general wariness of epilogues, I felt that the one in Icebreaker was the most original I've read in a long time, a true and pleasant surprise that for me justified epilogue status. I also like that the protagonists tend to come from strong family backgrounds, and they both want families of their own. I really like the way they have to work to balance multiple, even competing priorities, and the way they do that such that it honors both individuals and the family they might want together.

What did not work as well for me was the way the actual relationship between Sinead and Adam progressed. It was obvious right away that Sinead and Adam found each other attractive. But given their mutual wariness and the very real ethical concerns that Sinead has, the shift from lawyer/client to first kiss felt awkward and forced to me. In fact, the whole trajectory of the relationship felt a bit forced, a bit shallow. Despite all of the interesting issues between these characters, what brings them together felt most like sexual attraction, and most of the issues that break them apart seem, well, a little ridiculous. Actually, it's not the issues that are ridiculous as much as the rapidity with which they create distance. And while I understood clearly that these were two characters who were resisting intimacy with almost everything they had, the issue from Adam's past that Sinead uncovers is so compelling that I really expected the book to make more use of that, both inside the romantic relationship and in general. When that did not happen, it felt to me like an opportunity for a much more interesting, much deeper book was bypassed, and that only accentuated the superficiality of Adam and Sinead's relationship.

Consequently, the book felt more constructed to me than naturally flowing. For example, since Adam is so reserved with Sinead, he is given a bromance with Anthony Dante, chef and brother of Blades captain Michael Dante (both men have their own books, as well), and Adam and Anthony talk like little old women on testosterone, complete with a long-running, and increasingly forced Three Stooges allegory/philosophy/bonding moment. The relationship created a contrast in Adam's character that seemed more convenient than logical to the rest of his character development. And ultimately, that is how I felt about much of Sinead and Adam's relationship development, as well.

I did, however, enjoy spending a little time with Ty Gallagher and Michael Dante, though, and had I not read Body Check, I might have found Icebreaker a bit fresher. Overall, it was a well written, diverting, mostly fun read, if not a revelation. B-

→ Janet
Previous article: REVIEW: His Wife for One Night by Molly O’Keefe
Next Post: A Sonnet (or two) to the Packers by Sarah Wendell, poetess, and some random thoughts about sports romances