The latest book in your Ice series, Ice Storm, opens with a bang. Literally. In a prologue set sometime in the past, we are introduced to nineteen-year-old the heroine this way:

Mary Isobel Curwen had never shot a man before. She stood there, numb, unmoving. She’d never fired a gun before, and the feel of it in her grasp was disturbing.

A paragraph down is there is some more terrific writing:

Had she blown a hole through his head? His chest? Was he dead or just wounded? She knew she ought to check… She’d had every reason to shoot him but you couldn’t very well let a man bleed to death, could you? she thought dazedly. Even if he’d been trying to kill you? 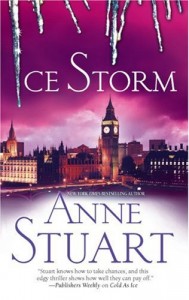 Or maybe you could. Maybe you could drop the gun, turn and run, as fast as possible, before he suddenly stood up and came after you, before one of his buddies came running to see where the noise had come from. Maybe you could take the gun with you, just in case.

I love the creative use of second person here, the way you put me in Mary Isobel’s head. So I was very excited to sink into this book and find out more about what made Mary Isobel, or the mysterious Madam Isobel Lambert of your Ice series, tick.

As chapter one opens, the mysterious board that oversees the secret operation known as the Committee gives Isobel, who now heads the agency, the task of extracting a former terrorist who has also served as second-in-command to ruthless dictators out of Morocco. Serafin the Butcher, as he is known, is ready to trade all the intelligence he holds in his memory in return for safe passage to England.

Though she appears to be “of a certain age” Isobel is in fact only thirty-seven or so. She is more vulnerable than most people imagine, and it is her task to get Serafin out of Morocco and to debrief him. Just before she leaves, she gets a photo of Serafin and is shocked to recognize Killian, the man she shot and left for dead all those years ago, the man she had believed she killed.

Alternating with the present day chapters are flashbacks to Isobel and Killian’s past, which reveal that Isobel was once a normal American girl, planning to enroll in the Cordon Bleu cooking school in Paris and to hike around France before that. In Marseilles she wandered into a bad neighborhood and was attacked by a gang, but a mysterious young man saved her.

The man was Killian. Though Mary Isobel didn’t know it, Killian was in France to join a group of terrorists planning to assassinate the leader of an African country. To provide himself with a cover, he invited Mary Isobel to hike with him, planning to seduce her to keep her blind to his plans, and then leave her when he reached his destination. Of course, the plan went awry, Killian wound up shot and left for dead, and the experience was the catalyst that led Mary Isobel to change her name and join the Committee.

On arriving at their meeting place in Morocco eighteen years later, Isobel is greeted by a twelve year old boy soldier with an AK-47. The boy, Mahmoud, leads her to the man who is now known as Serafin the Butcher. But he is so changed that Isobel is not certain if he and Killian are one and the same. Gone is the good looking young man who seduced her so expertly, and in his place is a paunchy, black-toothed, washed out but ruthless man. Soon, he and Isobel are on the go and in danger. And Isobel discovers that the attraction between Killian and herself did not die, anymore than he did.

Interspersed between Killian and Isobel’s story are subplots about other characters from previous Ice books. Harry Thomason, the previous head of the Committee, thinks the organization has gone to pot under Isobel’s leadership; Peter and Genevieve are dealing with infertility. Taka sends his cousin Reno to England for training to become a Committee recruit, and eventually, much to my delight, Bastien and Chloe from Black Ice appear in the book as well.

Ice Storm is action-filled, entertaining, and moves along at a good clip. As in some of your other books, the dialogue is often ironic or confrontational, and frequently terrific. Here’s an example, from one of the flashback scenes, when Killian is just getting to know Isobel, and she is still clueless about his identity.

“I’ve got a thermos of coffee,” he’d said by way of greeting. “Black as the devil, hot as hell, pure as an angel, sweet as love.”

She just looked at him. “I don’t like sugar.”

He shrugged. “Well, if we’re going to be traveling together we’ll have to compromise. There isn’t really that much sugar in it.”

“I thought you said ‘sweet as love.'”

“I find love bittersweet, don’t you?”

She opened the thermos and poured some into the cap, taking a tentative sip. “I’m not sure I find love at all,” she replied.

While I enjoyed this and other aspects of the book, I also had some problems with it. To begin with, I was disappointed with the portrayal of Isobel. I had hoped for a heroine as ruthless and competent as the male agents in the Committee.

Isobel is likeable enough, and I don’t mind your showing her past as a vulnerable teenager who fell in love with the wrong man. I also had no objection to your portraying Isobel as a woman who has become weary of her job, or to the way meeting Killian again brought back some of her youthful vulnerability, as it was bound to do.

What bothered me was the way the book glossed over some of the most interesting pieces of Isobel’s past, her induction to the Committee and her work in the field. Not only that, there was little evidence of her training in the Isobel of the present, so that I became conscious of a double standard in your portrayal of Isobel when compared to that of the Committee’s male agents.

Bastien in Black Ice was bone-tired as well, but that didn’t stop him from being a killing machine for much of that book. Isobel, though she could take a life, was always left shaken afterwards.

Peter of Cold as Ice was willing to sleep with men to get the job done. And Taka, Bastien and Peter all understood that sex can equal power when used expertly enough. Not so Isobel.

In addition, there are so many hints that not everything about Killian is as it seems at first, and hints about other things as well, that I wondered how it was possible that I could easily pick up on them, while Isobel, who had supposedly spent years as an ice cold undercover operative, never had a clue.

No amount of emotional vulnerability or fraying would have made Bastien, Peter or Taka so blind, so I was left conclude that Isobel had never shared their cold competence, and to wonder how on earth she had ever been accepted into the Committee in the days when Harry Thomason ran it.

Much of the story is told from Isobel’s POV, with briefer sections in Killian’s. I can understand why you made that choice, because the story requires that Killian be shrouded in mystery. But the end result is that while I liked Killian, I was not convinced that he was “the most dangerous man in the world.” I never really felt I got much insight into his character, even at the end of the book, and he remains somewhat sketchy to me.

I was also, once again, and more than ever before, disappointed in the portrayal of the Committee. Gone is the ruthless, amoral, brutal and relentless organization that made Black Ice such a riveting book. When, in one scene Harry Thomason waxes nostalgic about “the good old days, where enemies were straightforward, where you trusted no one, and any inconveniences and anomalies were wiped out,” I found myself nodding in agreement.

I wondered if Thomason was right about the effects of Isobel’s leadership, since the Committee under her had evidently dwindled to a few people, most of whom had forgotten how to do their jobs. Their sudden incompetence felt like a contrivance to allow Killian to have the upper hand over Isobel for much of the book.

Still, the book was thoroughly involving, the sex scenes hot enough to make me fan myself, and I very much enjoyed the dialogue, the international settings, the lean and taut writing, the subplots about Peter and Reno, and the revelations about Mahmoud. Bastien’s appearance in the story made my heart skip a beat, and the final scene of the book was truly superb, just perfect.

For all these reasons I think that despite the problems I had, I would probably buy the book again, given the chance.

Ice Storm was deeply entertaining, but it could have been so much more. Black Ice was an A read for me, Cold as Ice a B+ , Ice Blue a B, and so, it’s with a mixture of gratitude for the enjoyment I’ve gotten from those books, sadness and the over this series’ diminishing returns for me, and the hope for more from Fire and Ice that I give Ice Storm a B-.