Warning: mysqli_query(): (22032/3141): Invalid JSON text in argument 1 to function json_contains: "Invalid value." at position 0. in /home/customer/www/dearauthor.com/public_html/wp-includes/class-wpdb.php on line 2187
 REVIEW: I Now Pronounce You Someone Else by Erin McCahan
July 21, 2010

REVIEW: I Now Pronounce You Someone Else by Erin McCahan

Teen romances have recently opened up to exploration of sexual identities, acts, and what it means to really be in love.   Novels such as Kiss It explore the often real fact that teens do want to have sex.   I Now Pronounce You Someone Else, however, explores what it’s like to be someone who just doesn’t want it before marriage.   Intertwined with this idea of marriage is the struggle of a girl trying to find out who she is.

If there was one place Bronwen could imagine having sex for the first time, the couch in her parents basement is definitely not it.   Chad, her prom date for the night, just didn’t seem to get it.   She dumped him at the risk of her parents disapproval, and kept her virginity.   Not like that mattered to them.   They were too busy thinking of how Chad made a great boyfriend for her.   It was always like this.   How could she not be switched at birth? 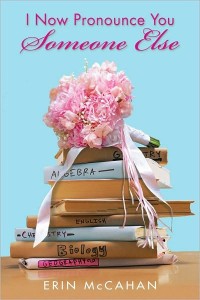 Ever since she was little, Bronwen had a theory she was switched at birth, and was really Phoebe Lilywhite.   She knows she wasn’t, but how else could one explain being the only one in the family to hate ketchup?   Or how her mother always seems to find fault with her, while praising her brother – whom she has nicknamed Jesus?   For the longest time, Bronwen has secretly been Phoebe.   It’s just who she is.

Meeting Jared Sondervan changes that, though.   He isn’t thrilled, but he is willing to wait for marriage.   He’ s a college boy, impossibly cute, and just right for her.   They are truly in love.   Everything’s great.   But with commitment comes questions?   Who is Bronwen?   Phoebe?   Or someone else entirely?

Bronwen is a character that manages to have me relating to her at every turn.   Most teenagers feel that sense of distance from their family, especially when they are discovering how to define themselves.   She’s funny but not annoying, and she works really well as a protagonist.   Her narration is never preachy – which I was originally worried about, because a lot of novels with characters that have the abstinence mentality are.   Jared was a nice fit for her, though he was kind of vanilla for my tastes.

Their relationship is really cute, and while I enjoyed seeing it unfold, the marketing was not what I expected.   The reader is vary aware that Jared will propose to Bronwen, but the first half of the book is not about that.   The entire book, while focused on the relationship, is not about the proposal and eventual marriage.   I know the author isn’t responsible for marketing, but I really did not like being led to expect that from the book.   They have a nice dynamic, and their status as an engaged couple and the troubles and eventual heartbreaks that come from it were realistic, and I was glad the teen marriage trope wasn’t glossed over as something light and not a big deal.

Secondary characters were hit and miss for me, though, and in this book I felt like that made an impact.   Bronwen’s mother is a big character in terms of her attitude towards Bronwen and how that shaped Bronwen’s inability to find herself and feel like she is a part of her family – and while we constantly see the side of her mother that is self-centered and against Bronwen’s well being, we never see a decent fleshing out of her love for her daughter, which is supposed to exist.   I would have liked to see at least one main scene where her mother was being really kind and supportive.   Her relationship with her step-father, Whitt, was much better in my opinion, and the tying up of that relationship is a really good lesson for teens that deal with a step-parent.   Lauren, Bronwen’s best friend, is also done really well.

My other main quibble that really prevented this book from being one I would keep was the treatment of Bronwen’s image and the ending as a whole.   The concept of her Phoebe Lilywhite personae was a cool one; it just wasn’t used as much to my liking.   Passing references and all were nice, but the concept itself just didn’t live up to it’s full potential.   The ending was a mixed bag for me.   I liked that while Jared and Bronwen are given a chance at happiness, it isn’t certain, and that Bronwen and Lauren’s high school friendship wasn’t as strong as it once was.   It was realistic.   At the same time, I felt like the general quickening up of the years in short little summarized bursts was just not to my liking.   I would have liked a one year later kind of thing.   It would have had the same affect but left some things to the reader’s imagination.

There is a lot to like about I Now Pronounce You Someone Else, especially if you are a soft romantic, but some of the character relationships didn’t feel   up to par, and some of the concepts didn’t go as far as they should have.   It’s a much better romance than a lot of the stuff out on the market, and is a solid debut novel, but just didn’t capture me the way other romance books for teens have.   B-