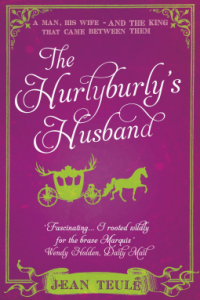 A man, his wife – and the King that came between them.
The Marquis de Montespan and his new wife, Athenais, are a true love-match – a rarity amongst the nobility of seventeenth-century France.

But love is not enough to maintain their hedonistic lifestyle. When Madame de Montespan is offered the chance to become lady-in-waiting to the Queen at Versailles, she seizes this opportunity to turn their fortunes round. Too late, Montespan discovers that his ravishing wife has caught the eye of King Louis XIV.

With a cover and title (derived from the name of Athenais’s signature hairstyle – à la hurluberlu) like these, I simply had to check out the blurb and find out what the book was all about. After reading the blurb, I realized, “Hey, I really don’t know anything about the Marquise’s husband. I’ve never even given him a second thought. Hmmmm.” I was intrigued.

The grim opening and following scenes paint a vivid image of the world of smells, rotten teeth, disgusting streets, and unassailable honor ready to be backed up by the sword that was 17th century Paris in the age of Louis XIV. This is swiftly followed by our awkward young lovers meeting and falling immediately head over heels for each other. Soon the happy – but desperately poor – newlyweds are living it up and sinking like millstones into debt. If conjugal bliss – ahem – could pay the bills, they’d have been wealthy but alas, no dice.

If poor Louis-Henri didn’t have bad luck, he’d have had no luck at all. Twice he burdens himself with even more debt to try and earn military glory for his King and rewards for himself but Fate merely snickered. Meanwhile after visits to Versailles, Athenais is tired of poverty. She wants luxury like she wants her next breath. In the glory of the King, she sees it. France revolves around him and heaps ecstatic praise at his feet.

Athenais has the sparkling personality and wit to shine in the glittering company of courtiers with their rotting teeth, caked maquillage and vicious temperaments ready to turn on a disfavored one like hounds on a hare. She also has the astounding beauty to attract the King’s eye. Suddenly a naïve Louis-Henri thinks their luck has changed only to quickly discover it comes at a cost.

Definitely and sympathetically told from Louis-Henri’s POV, it’s sad to see his despair and rage at something he can’t change. Athenais tells him there was nothing she could do but give in to the King’s wishes for fear of their families suffering the King’s displeasure but was her decision “helped” by her love of luxury? Her family is delighted to reap the benefits and scornful of her boorish and bourgeois acting husband for complaining. Even Moliere pillories him in a play.

It’s hard to settle on a description of Louis-Henri: naïve, bat-shit crazy, love struck? He does go off the deep end more than once. He is characterized as a hot-headed Gascon but he takes it to steroid level. Even I was astonished to read how he acted in the presence of the King. Tilting at this particular windmill was brave if ultimately fruitless. Tilting at it in the age of “lettres de cachet” – that took guts. Too bad that Louis-Henri was “a man who loved too much.” B-

After reading “The Hurlyburly’s Husband,” I got inspired to pull out a DVD set that I’d bought years ago called “L’Allee du Roi” (The King’s Way). It’s a French television production but there is a region 1 version with English subtitles. I bought mine online from Canada but I think Amazon has it now.

The production assumes some knowledge of 17th century France and the major players at Court. A brief refresher on Louis XIV, his mistress Madame de Montespan (the Hurlyburly herself) and his second wife Françoise d’Aubigné the Marquise de Maintenon might be in order before viewing. The production values are good, the costumes are exquisite, and the period music is divine. The action focuses mainly on Françoise’s early life and then on her growing relationship with the King after she becomes the governess to his children with Athenais de Montespan then moves on to her years as Louis’s unacknowledged wife. Since the story is all about her, she is the sympathetic one while Athenais de Montespan is pretty much the neglectful mother from hell – something her children apparently agreed with. As for Francoise – the meek did inherit the earth – or Louis XIV who was pretty much everything in France – though a life at his beck and call might not have been all she desired. B