REVIEW: Hunk for the Holidays by Katie Lane

I rarely believe in insta-love and, in general, holiday stories leave me cranky. I didn’t think I’d like this book—even the title made me smirk (although the guy on the cover is seriously hot).  But Hunk for the Holidays entertained me. It wasn’t perfect, but it was a good time. 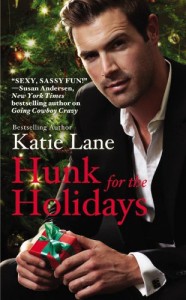 The beginning of your novel is almost exactly like that of Lisa Kleypas’s Suddenly You (published in 2001.) In both books, a strong-willed businesswoman hires, for the night, an escort. The man who turns up at the door is older than she expects, confident, and slightly bemused. He’s confused because he, of course, is not an escort at all, but rather a fellow business owner and, in the case of the hero of Hunk for the Holidays, the heroine’s professional competitor. The man, taken with the woman who’s mistaken him, lets her think he’s an escort and the two share a passionate evening. The setup allows for humor and lust to play out between strangers and, in both books, the premise is appealingly done.

In Hunk for the Holidays, Cassie McPherson is too busy to date. Plus, her last boyfriend was a budding cross-dresser and really, just not enough man for her. Cassie spends most of her time working for her family’s business, M&M Construction. Cassie loves the business, loves her family, but doesn’t love her job. She’d prefer to do the hands-on work of developing and building projects, but her father has her working as the firm’s in-house accountant/manager. Cassie accedes to her father’s wishes mostly because she’s afraid to confront him—he recently had a heart attack and she doesn’t want to upset him. He’s already pretty damn upset by a new, upcoming firm, Sutton Construction, owned by the very ambitious James Sutton.

James shows up at Cassie’s office—he’d a meeting there—three nights before Christmas. It’s the night of Cassie’s office Christmas party and she assumes—he is in a tux—he’s the escort she’s hired to be her date for the party. Cassie has hired quite a few escorts in the past year. She doesn’t hire them for sex but rather to keep her match-making family at bay. Usually, the men who show up are younger and do whatever she says. Cassie really likes to be in control of her life—it’s not a stretch to call her bossy. The minute James walks into her life, she starts telling him what to do.

He tipped his head to one side. “Who are you?”

Oh, so that was it. She just hadn’t introduced herself. She laughed and held the door of the elevator. “I’m Cassie McPherson, your employer for the evening.”

He didn’t move. “My employer?”

Back to the mental deficiency theory. She tried talking slowly and clearly. “Yes, I called Elite Escorts and hired you for the evening to take me to my office Christmas party. I paid in advance, so I expect a little service here. Like maybe you getting a move on.”

His whiskey eyes twinkled, but he still didn’t move. “You’re Cassie McPherson, the daughter of Al McPherson, and you called for a male escort?”

“Right. So are you coming or do I need to get a refund?”

“Not that it makes a difference, but no. He’s at home.”

He might be a simpleton, but, man, the flash of those white, even teeth and dimples were flat-out sexy. “Then I guess I’m all yours for the evening.”

James doesn’t correct Cassie because, from the moment he sees her, he’s smitten.

As soon as he realized she’d mistaken him for someone else, he should’ve introduced himself. But she surprised him. He wasn’t expecting a beautiful, dark-haired woman. He was expecting Al McPherson, the gruff man who had called him earlier in the day to set up a meeting. James had stepped off the elevator, nervous and excited about meeting one of the most respected men in the business, and was completely sideswiped by long, sexy legs and a tiny patch of red satin. Once his gaze locked on those undies, his curiosity and excitement about meeting Big Al had flown straight out the window. Along with every coherent thought he’d ever had.

Follow sexy underwear with sparkling green eyes and full, luscious lips, and he was lucky that he had remembered his name. He sure didn’t give a second thought to her father or to the Christmas party he was supposed to attend. Damn, his mind had been on penis-pilot way before his name even came up.

The two go to the party together where James—and the reader—meet Cassie’s family. They’re quite a group; her brothers are all alpha-males (one, Rory, has his own mini-love story in this book), her father is overbearing and yet likable, her great-aunt Louise—that woman likes her rum—is the best kind of busybody. James likes them all and, as the evening goes on, he realizes he really likes Cassie (it’s the beginning of insta-love). James plans to take Cassie home after the party, tell her whom he is, and get her out of her undies. Cassie ruins his plans by getting so drunk she passes out in his bed. When James wakes up in the morning, Cassie’s taken matters in hand and the two have wild happy sex. James knows he has to confess his identity, but the sex is so great and their connection so strong, he puts it off.

The story in this book takes place over just a few days and that is the novel’s greatest weakness. Two days into their relationship, Cassie and James have more drama than most couples achieve in weeks, many weeks. There are very few romances that have made me believe the lovers could fall deeply in love in just a few days and this is not one of them. But, the story is fun to read, the characters are engaging, and the prose is witty—I decided to suspend my disbelief, relax, and enjoy.

I liked Cassie and James both as independent characters and as lovers. Cassie is an unusually alpha-female for a contemporary romance. She’s unabashedly high-handed, easy to anger, and, upon occasion, rude. In the past she’s gone for guys she could rule. James is her match—not her master. He refuses to let her have all the control in their relationship but he is in no way a “my way or the highway male.” Both of them value their professions—and the companies they’ve created—tremendously and I liked how the novel dealt with the reality of them competing for bids. Ms. Lane writes dialogue and sex scenes well and I found the insta-chemistry between Cassie and James easy to believe.

I also liked the cast of characters in the novel. James’s suburban neighbors, Cassie’s family, even the random parents and kids impatiently waiting in the line to see Santa are all strongly drawn. Again, the novel’s weakness is in its length. I wanted to see more of almost everyone in the book and felt cheated at how little exposure many of the characters were given.

By the end of this too short book, Christmas has arrived (the holiday part of the book is relatively unobtrusive which worked for me), and there’s a roast beef dinner where everyone is feeling the holiday glow. This rather rushed HEA isn’t especially likely but it’s pleasant and I closed the book feeling more lighthearted than when I began. If all you want is a sexy, fun, contemporary fairy-tale, Hunk for the Holidays fits the bill. I give it a B-.