REVIEW: How I Learned to Love the Walrus by Beth Orsoff

“When Los Angeles publicist Sydney Green convinces her boss to let her produce a documentary for the Save the Walrus Foundation, the only one Sydney Green is interested in saving is herself. The walruses are merely a means to improving her career and her love life, and not necessarily in that order. Sydney would've killed the project the second she learned she'd be the one having to spend a month in rural Alaska if it had been for any other client. But for rising star and sometimes boyfriend Blake McKinley, no sacrifice is ever too great.

Yet a funny thing happens on the way to the Arctic. A gregarious walrus pup, a cantankerous scientist, an Australian sex goddess, a Star Wars obsessed six-year-old, and friends and nemeses both past and present rock Sydney Green's well-ordered world. Soon Sydney must choose between doing what's easy and doing what's right.”

First, apologies for stealing your blurb but it’s such a good one and I’m feeling lazy. Second, thanks for having the prologue and first chapter up at your website because reading them made me decide to check the book out. Third, love the cover but am glad I can’t smell the cute walrus on it. 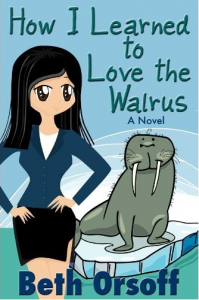 Well, I’m a long time fan of the chick lit style and when it’s done well, it still works for me. But what caught my attention is the promise that Sydney is going to change over the course of the book. You definitely hit a lot of the tropes of the genre. Sydney is in a classic public relations job but since she also lives in LA, what else could she do? The lengths to which she must go to appease and please her celeb clients shows that I could never make it in that job. I would have told some self obsessed fool to shove it a long time ago.

The “roughing it” scenes are a hoot. I never saw Sydney as totally self absorbed, despite her job and location, so much as ignorant of what living on a sanctuary island would mean. And it means some major changes in lifestyle for a 21st Century person used to electricity and hot water! That plus the time spent and info on the walruses have changed my mind about ever going on one of these eco vacations. I’ll just send a check, thank you!

Since this is a first person book, it takes a while to get to know prickly Ethan. He’s seen more about people’s cynicism and lack of interest in something about which he is passionate than has Sidney. He’s also at the stage of life where you say, “enough with the bullshit. I just don’t give a fuck and I’m not going to pretend.” Maybe he’s moved past the civil stage that most of us still cling to, at least a little, but the sentiment, I’ll bet, is one that a lot of people share. Some of his hostility also makes sense as he watches Sidney, for whom he’s starting to care, continue on about Blake, who Ethan obviously pegs as a user. He’s frustrated with her on her own behalf.

Ethan is a complex character. I can see that he’d be wrapped up in this subject which is his academic life and about which he’s an acknowledged expert. He’s also a tenured professor so he doesn’t have to take as much shit as the grad students around him. He has a checkered personal past that isn’t totally explored but then he’s a guy and not a touchy feely ‘let’s talk about relationships’ kind either. He’s more the clinical scientist. His teasing and treatment of Sidney does remind me of a little boy who pushes away what he’s interested in and his growing interest in her is obvious for a long time. But the final payoff of the romance takes a long time in coming and is too truncated. Perhaps it’s more realistic, and from Ethan what he does is probably tantamount to an “I LOVE YOU!” but I need a bigger romantic payoff.

I do like how Sidney’s conversion to being a green PR agent occurs. Also the realism about how her old firm isn’t suddenly going to develop a conscience is a refreshing change from a fluffy bunny scene. Sidney has to truly put herself on the line and make a sacrifice. She’s got to earn her green card. If I hadn’t had to wait until so late in the book for any sign of romance between Sidney and Ethan and the payoff had been bigger, this book would have worked better for me. As it is, it’s a B-