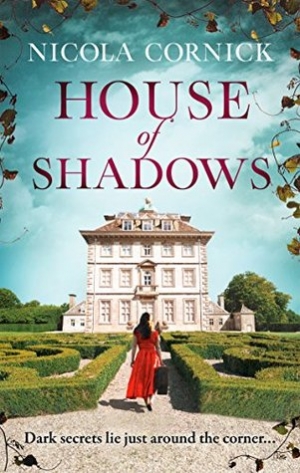 London, 1662:
There was something the Winter Queen needed to tell him. She fought for the strength to speak.
‘The crystal mirror is a danger. It must be destroyed – ‘
He replied instantly. ‘It will’.

Ashdown, Oxfordshire, present day: Ben Ansell is researching his family tree when he disappears. As his sister Holly begins a desperate search, she finds herself inexplicably drawn to an ornate antique mirror and to the diary of Lavinia, a 19th century courtesan who was living at Ashdown House when it burned to the ground over 200 years ago.

Intrigued, and determined to find out more about the tragedy at Ashdown, Holly’s only hope is that uncovering the truth about the past will lead her to Ben.

I admit I had no idea who the Winter Queen was. When I saw “Queen Elizabeth” I was thinking Elizabeth the First. But I immediately realised my mistake and took a quick tour on Google to orient myself. Actually, I did a bit of Googling while reading. I learned a whole pile of things I didn’t know and that is always a bonus. I appreciated very much that you wove actual history and speculated history (if that’s an appropriate phrase) in with your fiction. I didn’t always know what was real and what was not – I thought for sure the Knights of the Rosy Cross were made up but I was wrong about that too.

The story begins with the death of Elizabeth Stuart, Queen of Bohemia. She calls to her side William Craven and entrusts him with the Sistrin pearl, a large pearl used by the Knights of the Rosy Cross to scry into the future. Due to the “greed of men”, the inherent good of the object has been corrupted and it is now cursed, said to bring death by water to those who use its power. William vows to keep it hidden and secure. Elizabeth also references a mirror – this is the Crystal mirror which is another object of power, also corrupt, said to bring death by fire.

Elizabeth’s and William’s story is then woven throughout the rest of the book, with significant time jumps as their long acquaintance is mapped out. When they first meet, Elizabeth is married to Frederick, the exiled Palatine of Bohemia. It was a love match but Frederick is a little weak-willed and William Craven is the opposite. After Frederick’s untimely death trying to regain the Palitanate, Elizabeth and William grow ever closer but it is a pure and chaste love for a long time. Wikipedia tells me that there were rumours that William and Elizabeth secretly married but that there is no “actual evidence” of this. You take this speculation and weave it into to the story. The great love of Elizabeth’s life, in House of Shadows at least, is William Craven. The curse of the Sistrin Pearl and the Crystal mirror eventually tears them apart.

The bulk of the book is set in the present day, when Holly Ansell, a glass engraver (what a fascinating career – I haven’t been down that particular Google rabbit hole yet but I plan to), receives a terrified call from her six-year-old niece, Florence, to say that the child’s father Ben (Holly’s brother) has disappeared and asking if Aunt Holly could please come to the old Mill at Ashdown straight away?

Holly lives in London with her shitty fiance but agrees at once to drive the couple of hours to be with Florence and alert the authorities. Given her shitty fiance is shitty, Holly basically breaks things off then and there. I say basically because it’s a little ambiguous but it is clarified not too much later.

At Ashdown, Holly sees a four-storey white chalk house with a golden cupola on the top – the house on the cover in fact. Except in the book, Ashdown House burned down in a fire and isn’t actually there. Weird. (The real Ashdown House is totally okay and not burned down. I checked.)

Since their parents died in an accident, Ben and Holly had been particularly close, with Holly idolising her brother. They were raised by their grandparents who live in nearby Oxford. Ben and Holly both jointly own the Mill house at Ashdown, having inherited it from their parents. Ben’s wife returns from an overseas trip and whisks Florence to London but Holly decides to move her workshop and stay in Ashdown. She wants to be close to the investigation of her brother’s disappearance, she needs to be away from her shitty ex-fiance and besides, she feels closer to Ben at Ashdown. Unfortunately, there is little about Florence after that. I’d have liked a little more given later events in the story.

At Ashdown, Holly’s introvert tendencies are challenged by Fran, the gregarious and extremely tactless (but kind-hearted) cafe owner and the village community which is all up in everyone’s business. She also meets, Mark Warner, a former soldier and current property developer/builder who is developing the Ashdown site.

Holly’s and Mark’s first encounter was something of a surprise. I was told that Holly felt some kind of karmic recognition and attraction to Mark but the speed of their move to the physical still felt a little out of left field for me. I’d have liked more obvious chemistry, perhaps some more conversation to illustrate the attraction but the interaction was largely silent. It didn’t translate well from the page to me and I wasn’t prepared for it.

While visiting her grandparents in Oxford, Holly finds the original diary of Lavinia Flyte, along with some notations in Ben’s handwriting. Ben had been looking into their family history it seems and Holly is convinced that he had been looking for the Sistrin pearl. In reading the diary, Holly comes to admire the young Lavinia, who eschewed the life of a flower-seller to become a courtesan. Her ‘patron’, Lord Evershot, was the owner of Ashdown House, the hunting lodge William Craven built for Elizabeth Stuart (which which she never saw). Lord Evershot is not a good guy. He’s violent and vicious. Things get worse when Lord Evershot hires surveyor Robert Verity to map the property at Ashdown. Lavinia and Robert fall in love with disastrous consequences.

Extracts from the diary make up almost all of Lavinia’s story but I appreciated Holly getting a bit more information about what happened after the diary’s entries stopped. Lavinia is a wonderful character – perhaps best summed up by this paragraph:

Oh, if only matters were different! But alas, Robert could barely afford to keep me—I am very expensive—and it would do him no credit to wed me. His career would be blighted, his good name tarnished. There is no way out of the situation. I feel so miserable I could cry, and that is something I do rarely for it is ruinous to the complexion.

There are three main romantic arcs in the book, with Holly’s and Mark’s being the only one which ends with a HEA . Mark’s and Holly’s romance felt underdeveloped at the start but I got on board as the story progressed and by the end I was cheering them on. Still, I’d have liked more time with Holly and Mark to see them as a couple; to witness their interactions and savour their connection. The book came in at 275 pages on my reader and I couldn’t help but think some more pages focusing on their relationship development would have helped me here, particularly because the book had so much work to do, what with covering three timelines and interconnected story arcs. Even though the book does have three arcs, the main one is clearly Holly’s in the present day so I didn’t feel short-changed from the perspective of there being only one happy romance.

The supernatural elements of the book are relatively subtle in many respects. Holly doesn’t travel through time to visit the court of Queen Elizabeth or anything. But there are strange occurrences which illustrate the linkage between the three couples and the strong suggestion that Holly and Mark are reincarnations of William & Elizabeth and Robert & Lavinia who finally get their HEA – so in that respect I guess there are really three happy endings? (As the saying goes “if all you have is a hammer everything looks like a nail” and I am a romance reader after all!)

“The Knights of the Rosy Cross was an odd sect. The members held all sorts of arcane beliefs.”“Prophecy.” Holly nodded. “And reincarnation.”“Reincarnation is a fascinating theory,” John said, “the rebirth of the soul in another body.”“It sounds exhausting to me,” Holly said, “living and re- living a life over and over again.”“You have a very practical mind,” John said affectionately. “There are different variations on the idea. One is that within your destiny there are different roads you can choose to travel, and that if you fail in some way the first time the pattern repeats in future generations. They inherit your spirit and your quest.”

I very much appreciated the unusual aspects of the book – particularly the 17C Hague setting and having a major character as an unapologetic courtesan. I also loved the rich history in which the novel is steeped – something you clearly know so well.

The end of the book ties up most of the loose ends albeit with some abruptness and, at least for me (I’m not great with predicting the outcome of mystery stories), some surprises (not of the fun variety). I hadn’t seen exactly where it was heading but it all made sense when I got there. Immediately after finishing the story I read the prologue and chapter one again which both were about Elizabeth Stuart. Those parts held so much more meaning once I fully understood their context. I think House of Shadows is the kind of book where new things will be revealed on a re-read.

Ultimately, I thought the novel was trying to do a little too much in too short a page count but there was a lot to enjoy about it as well. You clearly love Ashdown House and the personalities and legends that surround it and I’m glad to know something of those stories now, as well as the extras your talented imagination created and brought to life in House of Shadows.