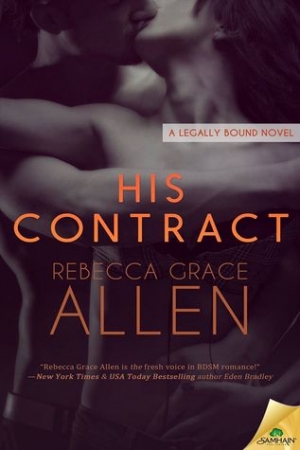 I’ve enjoyed your earlier books and the blurb for His Contract intrigued me, so I requested it for review.

Jack Archer is a Harvard law professor. The book begins with the death of his beloved wife, Eve, from cancer. Perhaps because I know so many people who have, have had or have died from cancer or perhaps because I’m a sap (or both), I was teary by page two. It is clear that Jack loves Eve deeply. They had been married for 25+ happy years and he is lost without her.

The book picks up a year later, when Jack has returned to a full teaching load at Harvard and his BFF, Patrick (who is a player and who I suspect will be the hero of a subsequent book), is encouraging Jack to get out and meet people.  Eve’s last wish for Jack is that he would fall in love again. She even made him promise her he would. Patrick is going to see to it that Jack at least has the opportunity.

Jack’s younger brother is Brady. Brady’s best friend is Nick and Nick’s younger sister is Lilly, our heroine. Lilly moved to Boston from Chicago some months before, after a “bad breakup”. She had been just about to take the bar exam after graduating from Northwestern University but for some reason, she didn’t. Her excuse of being unsure if she really wanted to be a lawyer is so thin everyone can see through it but few push her for the real answer (and she probably wouldn’t tell anyway). She is working as a paralegal with Nick’s husband, Gabe, at the law firm where Gabe is an associate.

While the opening few pages tugged at my heartstrings, the next part of the book felt clunky to me, with sentences which didn’t quite make sense or words used in unusual ways I felt didn’t quite work. (I had an early copy so it is possible those things were corrected before release, but I can only assess what I actually read.) It felt to me that information you wanted the reader to know was jammed in in places rather than feeling organic. For example, when you imparted that Lilly’s co-worker, Cassie, is half Latina, it felt forced. Not that her ethnicity was a problem at all, it just the way the reader (me) was informed of it which felt out of rhythm. There were a few other things, mainly in the front section of the book where the set up was done. Once I got past that bit, things smoothed out and I settled into the story.

Lilly had not just had a bad breakup. She had been involved in what was an abusive relationship, only she hadn’t realised it at the time. Damien (the douchebag ex) had introduced her to D/s play and Lilly found herself desperate for more. He never told her about safewords or soft/hard limits and he never provided aftercare. Lilly thought the way Damien did things was the way it was supposed to be done. At the time of their relationship, she was working as a summer intern at the same law firm where Damien worked and he wanted their relationship kept secret. He ignored her in public and never took her out on a date. I think we all know where this ends up.

Even after months, Lilly feels deeply ashamed of her relationship with Damien; of the things she let him do to her and the treatment she allowed (her words/thoughts, not mine). She lacks confidence and is frightened of her submissive side.

Jack discovered dominance after he and Eve had been married for some years. He and Eve had a very exciting and satisfying sex life, with a basement playroom and everything. Because of his position as a Harvard law professor, he and Eve always kept that part of their marriage very private and Patrick only knows by accident.

When Jack first meets Lilly, he is immediately attracted. She has a superficial resemblance to (the young) Eve (Lilly is 28, Jack is 44) and she looks so sad.  They share a couple of significant looks and there is a bit of that “magic Dom” thing that makes me roll my eyes, where Jack instinctively recognises Lilly’s submissive nature.

Jack realises Lilly has been hurt by her previous Dom (although he doesn’t really deserve the title, he was just an abusive jerk) and he wants to “heal” her.  Which, okay, for the sake of the story I could go along with but it was also a bit… ew and patronising as all get out. (Jack doesn’t make a habit of patronising her however.)

Jack and Lilly begin a D/s relationship – initially for one afternoon only, then for a three month period and then for a six month period. He teaches her all the things she didn’t know and never learned from Damien and helps her embrace her submissive side.  One of Lilly’s initial soft limits was “sex” which I thought was a little vague. Considering she’d specifically agreed to oral and various touching and that their D/s play was definitely sexual, I found it odd that either she or Jack would consider what they were doing was something other than “sex”. I get that Lilly meant intercourse. I’d have preferred if she’d said that.

Their sex play was hot and inventive and demonstrated the developing relationship between the pair.

Jack is concerned about their age difference and his reputation at Harvard, as well as what his son, Josh, may think (Josh is only three years younger than Lilly) and so asks, up front, for Lilly’s complete discretion. There are obviously parallels between this and her previous relationship and given how obvious they were, it did take a while for Lilly’s feelings about this to become clear to Jack.

I liked the way Lilly and Jack were together and I enjoyed the sex scenes.  I could understand Jack’s resistance to a “real relationship” given their age difference but I also thought he was terribly naive to think their D/s play didn’t constitute a “real relationship” in itself.  In the end, Jack’s fears, were allayed too easily and some aspects were simply not addressed at all.

I feel I’ve been fairly critical of the book. But I did enjoy it. At around 300 pages, the developing relationship takes up most of the page time and when Lilly and Jack were together, they were just lovely. I think you showed clearly that this pair were better together than apart and how well they complimented one another. These parts were the highlight of the story. I thought the beginning was a little clunky, some of the plot not clearly realised and the ending a bit rushed, but the middle, where most of the relationship was, was engaging and compelling reading and very entertaining.  I give His Contract a B-.