REVIEW: His Client by Ava March

I loved the excerpt for this book: prostitution! angst! unrequited love! m/m romance! It hit many of my not-so-sekrit Buttons of Hottness and Readerly Pleasure. And I very much enjoyed the book, even if I wanted to beat one of the heroes and not in a fun, sexy way. 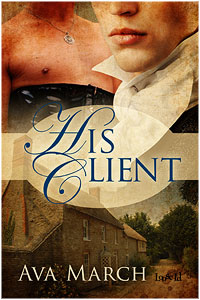 Jasper Reed, a bastard from the slums, has been working as a (sort of secret) male prostitute at a high-class (mostly heterosexual) brothel for 10 years, since he was 17:

Delacroix insisted the women dress in fine gowns to project the proper image for the house. But as the men never graced the receiving  room, the only requirement when they moved about the main areas of the house was that they were dressed just enough so any guests they came upon would mistake them for another patron wandering the corridor on their way to another of the bedchambers. Delacroix’s was well-known for its beautiful women, but its handful of accommodating men like himself were only known to those who had need of them.

Jasper has been hoarding his money so he can retire to the country, never to be beholden to anyone again. But he’s in love with one of his clients, Nathaniel Travers, who has been coming to see him for five years. Nate, in turn, is in love with his best friend, Peter Edmonton. We meet both Jasper and Nate on the eve of Edmonton’s marriage and Nate is devastated. Jasper listens, commiserates, and eventually distracts Nate with a (long, very hot) game of “Seduce the Shy, Innocent Virgin,” with Jasper playing the part of the virgin.

Nate is…a lot pathetic in his love for his friend, who is completely and utterly straight. Except for one early school incident, Edmonton has never given Nate any hope for any sort of relationship besides that of friendship, so his pining and hope and deep unrequitedness is mostly just annoying. Jasper’s unrequited longing is less annoying, because at least he knows Nate is…well, the word “gay” never comes up, of course, because it’s a historical romance set in 1822, but Jasper at least knows that Nate prefers men. In fact, Jasper’s longing is just the type of angst I enjoy. Nate’s angst made me want to slap him and yell “Snap out of it!”

Jasper tells Nate he has to get over Edmonton, but in telling Nate that, he realizes he needs to do the same. Nate will never see Jasper’s love, will never return it, despite the fantastic sex. So Jasper takes a week off (first time evah!) and goes to find and buy his house in the country. When he comes back, Nate is desperate for him, but it takes Jasper finally retiring and really leaving for Nate to realize what he’s lost and to go and hunt him down and get him back.

I’m fascinated with how m/m historical romance uses the homosexuality of the men to overcome class barriers. Class barriers become much less important in m/m historicals than the shared sexual identity. I’m going to write a paper about that one day. That aside, I don’t know where Nate got off thinking he had the right to go find Jasper and why he assumed Jasper would just fall into his arms. I also don’t like how Jasper threw up a final barrier of “I’m a durty durty hoar!!! How could you love MEEEEE?” when he’d never really worried about that before. I also wonder how a lower class character who has never left London has a perfect accent and knows how to ride a horse.

Writing/editing niggles: “But Jasper didn’t want a dominate Nate tonight.” AARGH!!! Really?! WHAT is it about the adjective “dominant” that people write it as the verb “dominate”? And why didn’t any number of editors and copy-editors catch this? And Ms. March, you overuse the word “flick”: “A flick of his wrist,” “the golden light flickering across his face,” “a flick of his fingers,” “a flick of his head,” “Flicked his tongue,” “flicking it to the floor” and, according to my search feature, twenty other instances of the word. It became noticeable.