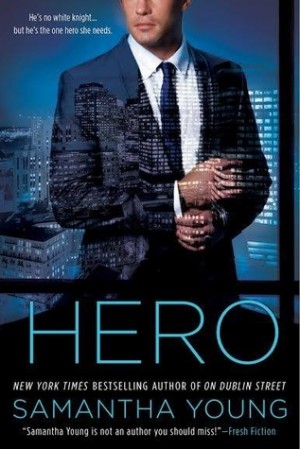 Generally speaking, your books are a hit for me, and I adore billionaire books of all shapes and sizes, so it was natural for me to read Hero.

Alexa Holland’s father lived a complicated life. He married one woman and had a family, and had an affair with Lexie’s mother and became her parent. For years, he was Lexie’s hero, but when she discovers his double life and his role in destroying the life of another woman he was involved with, Lexie cuts him off altogether.

Imagine her dismay when she discovers when showing up for work as assistant to one of New York’s premier photographers one day that the child of that “other” woman, billionaire business mogul, Caine Calloway, is the subject of that day’s photo shoot. He recognizes her name instantly when she introduces herself, and walks off the set immediately. As a result, Lexie’s temperamental boss fires her.

Lexie had wanted to speak to Caine before he stalked off, but had no luck. She decides to ambush him at his office so she can apologize for her father’s despicable actions. She barges her way into Caine’s office and apologizes. He realizes that she was fired for his actions, and offers her a job as his personal assistant. His hostility is overwhelming, but Lexie knows she’s an excellent PA, and frankly, she needs the money. So she accepts. Caine tests her constantly, not bothering to hide his open hostility, sending her on demeaning errands, like delivering “break it off” jewelry to a woman he’d been casually seeing, and generally being a tremendous ass to her. But Lexie perseveres striking up a friendship with Caine’s best friend, Henry. Soon Henry asks Lexie to attend a ball with him. Oh, he does it mostly to tweak Caine (which it does), but it also forces Lexie and Caine together, and soon, Caine’s hostility is revealed to be a burning attraction. Lexie wants to keep Caine at arm’s length, but the more time they spend together, the less about “just sex” their relationship becomes. But does Caine feel the same? And will he ever allow his growing feelings for Lexie to move beyond their parents’ destructive and painful past?

This was a book that I gobbled up, mostly because billionaire heroes vs. ingénue (-ish) heroines are my personal catnip. Because I consider you to be a trusted author, I overlooked what are some pretty strong red flags for me, assuming that in the end, I’d like this book. I was right. The first 40% of the book I really intensely disliked Caine. He ran hot and cold, was a true bastard to Lexie, and unfairly, in my estimation, blamed her for something that she had no part in and responsibility for. All of which I considered truly outrageous and honestly, quite mean. From the beginning they agree that their relationship will be strictly sex, nothing personal. Of course, that’s doomed to failure. And the first couple of sex scenes in the book have the feel of “hate fucking”, which I loathe as a trope. But fortunately, you move them beyond that relatively quickly, and once Lexie and the reader begins to get glimpses into Caine’s personal life, we discover that he’s got baggage of his own, and is terrified of his escalating feelings for Lexie. Overall, the story doesn’t necessarily break any new ground, but it’s well written, with a heroine who knows her own mind and doesn’t back down from a fight while still showing an endearing vulnerability. I found it harder to warm up to Caine, but in the end, I found their love story to come to a satisfying ending. Final grade: B-.