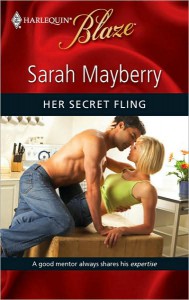 I’ve enjoyed nearly all your books and I’m glad to say that your most recent release, Her Secret Fling, was just as satisfying as your backlist titles.

Poppy Birmingham is a former Olympic gold medalist who suffered an injury and quit the sport. Poppy is almost relieved to be out of competitive swimming, something that had dominated her entire life. She gets a job as a sports writer for Melbourne Herald.

Jake Stevens greets Poppy with disdain and hostility. He views her as nothing more than a stupid jock. Jack’s behavior vacillates from rudeness to mockery which makes Poppy even more unsure of her decision to become a sports columnist. The irony is that Poppy’s admiration for Jack’s work was what made her decide to come to work at the Herald instead of endorsing cereal or other marketing opportunities.

Poppy showed that she didn’t leave her drive to be the best in the pool. Instead, she resolves to show everyone, including herself, that she is worthy of the position.

Jake is part angry at Poppy for being given “the kind of job it took dedicated journalists years to achieve” and part angry at himself for being a failure. Jake is a celebrated writer but it looks like he might be a one hit wonder. He can’t seem to write another word on his second book. “[W]hat writer with any ambition to be a novelist wrote only one book and never completed another.”

Jake is a real asshole in the beginning of the book. He’s openly rude to Poppy. He says and thinks crude and unkind things toward her. Poppy refused to take Jake’s insults without giving him a few home truths as well. At nearly every juncture, when Poppy could have been beaten down, she shows how she had the inner drive to be an Olympic medalist.

I found Jake very unlikeable in the first part of the story to the point that when Jake and Poppy have sex it is more based on Poppy’s previous image of Jake (the one she constructed before she met him) than the current Jake. The two get stuck sharing a car because of an airline strike and the proximity leads them to having a series of one night stands that eventually leads to a secret affair about which neither of them want their office co workers to know.

While Poppy was growing and moving forward, Jake was stagnating, held captive by his past. It was an interesting contrast. Poppy was gaining confidence, with each article, with having a somewhat healthy relationship with Jake, enjoying her co workers, appreciating the freedom of no longer being an athlete in training. Jake had lost his confidence because of a past relationship. He felt emotionally stunted, as if he had nothing to offer anyone, let alone Poppy. He couldn’t write his next novel. He couldn’t offer himself freely in a relationship.

“Mom, I’m fine. I swear. I go out, I do stuff. It’s not like I’m some bitter divorce holed up in my apartment living off canned food.”

His mother walked to the freezer and opened the door like a lawyer inviting the jury to examine exhibit A. Jake stared at the neat stack of frozen meals and pizzas filling the small space.

“Okay, maybe I could eat a little better,” he conceded.

His mother looked at him sadly. “I wish I could show you how much you’ve changed. The look in your eyes, the way you carry yourself–it’s as though you’re always braced, ready to defend yourself in case someone gets too close.”

I thought the resolution to Jake’s situation came a bit too suddenly. It could be said that the resolution started with Poppy and the beginning of the book, but I didn’t totally buy into that. Poppy’s character carries the book for me. I thought Jake was such a jerk and while he was hurting inside and suffering from his own insecurities, I thought that those were excuses that he never really acknowledged. His redemption, I guess, was incomplete for me. Poppy’s maturation from cub journalist to a really good sports reporting, employing her skills and experience, her natural empathy, and incorporating the advice that others, including Jake gave her, was a pleasure to read. B-