“Serving her country as one of the Women Airforce Service Pilots is Maggie Daniels’s dearest wish. But there are obstacles to overcome above and beyond the enemies in the Pacific, including her overprotective family, skeptical fellow pilots—and handsome, distant squadron leader Wesley Hicks. Whatever it takes, Maggie will prove herself to Wesley, until she succeeds in winning his admiration…and love.

Wesley can see that Maggie’s a first-class pilot. She’s also too fearless by half. The war has cost Wesley so much already. Can he let go of his guilt for a chance at happiness—and can he learn to trust in God…and Maggie…enough to believe in love for a lifetime?” 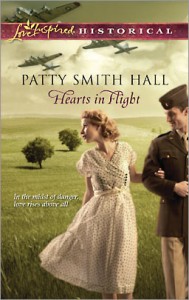 Since WWII is such a pivotal time in world and US history, I find myself drawn to books about it. Here’s real conflict any way it’s looked at and also such a dramatic change in the viewpoint of what women could and should do. True after the war was over, women did tend to get herded back towards more traditional roles but I can’t help but think that their roles which helped win the war, bore fruit a generation later.

Maggie is used to working and being around men. She’s run with her five male cousins for years and taken their guff and teasing so she doesn’t fall to pieces when she gets a threatening note. The disparagement of her uncle might hurt her feelings but she doesn’t let it interfere with what she sees as not only her war duty but also something she loves. As such, her decision to keep the threat to herself makes sense given her background. She also wants to fit in with the squadron and not get any special consideration or breaks. When the situation finally goes beyond just threats, she does own up to Wesley about them and is level headed enough to realize and admit that she made a mistake about it.

Wesley first takes up for Maggie to put her obnoxious Uncle James in his place but Maggie soon proves her skills and worth as a pilot. Wesley then has to grapple with his pledge to Merrilee to keep Maggie safe as well as his own past issues with his sister and her death. It takes him a while to deal with all this in addition to his growing fear for Maggie once he learns of the threats to her. At first, when seen from Maggie’s POV, he does seem patronizing but later he puts it differently, and in a way I could more easily accept were I Maggie, when he says that men are prone to want to protect women in general and the women that they care about in particular which is seconded by the Bell engineer who feels iffy about putting women in risk of danger even if it’s to win the war. But Wesley eventually steps past those instincts and admits that Maggie is a good pilot and her skills are needed to help win the war.

I like that both Maggie and her pilot friend Donna don’t give up their dreams to fly in order to get married. Both women find men who are totally behind the dreams of the women they love. Neither of the women are given ultimatums or guilt inducing “if you love me” tests. Realistic for both of them to find this? Maybe not but I enjoyed it anyway. The scene where Maggie tells off the obnoxious flyer at the USO club is fantastic. Wesley backs her up but she’s the one who puts the man in his place. This also shows how Wesley’s opinion of female pilots has slowly changed over the course of the book. It’s not a dramatic “forehead slapping” moment but an accumulation of seeing Maggie and Donna’s flying abilities and realizing that they have the right to decide whether or not to risk themselves doing what they love.

I enjoyed reading the details sprinkled through the book: women wore hats – with hat pins – and gloves every day, childbirth was still a danger to the mother, stockings had seams, and it hadn’t been that long since women had the right to vote. Yet some things seem strange such as how easily Merrilee gets ten pound bags of sugar and how often Maggie can take Wesley’s plane flying regardless of gasoline rationing.

There is a real sense of the patriotism of this era and a more innocent time when they believed the government propaganda and actually feared enemy agents infiltrating areas like the bomber factory. It’s also a totally different time when people were ashamed to take handouts – unlike now when people seem to think they’re owed. How things have changed….

The religious aspects of the story don’t take over the book. No one gets preached at or to. No one needs “saving.” Maggie and Wesley are religious people and God is part of their daily lives. They think about praying about situations that arise and for help with problems that perplex them. It might be more than some readers want in a book but it’s less intrusive to the narrative then other inspie books I’ve read.

There’s a lot going on in this book: Maggie’s desire to fly vs the men in her platoon, Maggie and Wesley’s growing feelings for each other, the war effort, Maggie’s Aunt Merrilee’s issues with the inheritance of the family homestead and how Uncle James wants to go to court to get it, the tent families and the bootleg liquor. Some of these get tied up in the end but I don’t understand the semi-resolution of the Aunt’s failed marriage and the issue of who owns the house. What was the point? Merrilee is still divorced and her husband is gone and that subplot would have arranged itself if just allowed to play out so…why bother? Also, what’s the deal with Edie the secretary? Her role in the book eventually dwindles to nothing.

I love reading about this time when women stepped out of housebound duties and contributed so much to the war effort. As Maggie’s father says, the war was changing people’s views of women having careers. Maggie doesn’t just work as a riveter, she risks her life doing what she loves to do – fly. And the risks weren’t just those that any pilot faced but included the women facing the enmity of the male pilots and being used as guinea pigs with the risky Super Fortress plane. It chaps my hide about how little recognition they got until recently. I might wish that the slightly unfinished feel of two subplots had been better fleshed out but I enjoyed reading you take on this era. B-