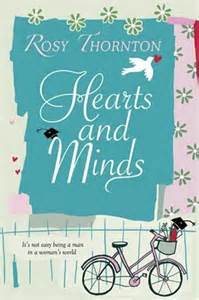 “St Radegund’s College, Cambridge, which admits only women students, breaks with 160 years of tradition to appoint a man, former BBC executive James Rycarte, to be its new Head of House. As Rycarte fights to win over the Fellowship in the face of opposition from a group of feminist dons, the Senior Tutor, Dr Martha Pearce, has her own struggles: an academic career in stagnation, a depressed teenage daughter and a marriage which may be foundering. Meanwhile the college library is subsiding into the fen mud and the students are holding a competition to see who can ‘get a snog off the Dean’.

The taint of money, the politics of gender and the colour of the SCR curtains: Hearts and Minds is a campus satire for the 21st century.”

It’s been a while since I read “Crossed Wires” but you’d always remained on my list of authors to keep an eye on and when I was looking to read something a little different, I remembered that I’d bought some more of your books. Though it didn’t turn out to have quite as much romance as I was hoping for, I got caught up in the story, the writing and learning all kinds of things about Cambridge colleges. After reading your page at Emmanuel College, I would imagine that if anyone could write a romance with a sticky legal will issue and get me to believe it, it would be you.

For readers like me who have no first hand experience with Oxbridge and all the attendant traditions, rules and regulations, this is a full on immersion. And I loved it. Senior Tutors, Heads of Hall, actually referring to someone as “Master” and it not be related to BDSM, ents officers, and Michaelmas Term are among the things I can now say I know a little about. Before I read this, my knowledge of the behind the scenes of academia was pretty much limited to the phrase “publish or perish” but no more! I appreciate the way all this information is presented. Since James Rycarte is new to it all, having him be the “guinea pig” to whom all is explained allowed me to vicariously go along when he’s introduced to the “way things are done at St Radegund.”

Interesting as all this is, without characters I cared about, I wouldn’t have kept reading. James and Martha are both at crossroads in their lives. James is switching professional gears, leaving behind the world of the BBC and entering an environment where there are pitfalls at every turn from where he can park his bike, and how will the college keep the library from sinking into the fens to questions of academic integrity. Meanwhile Martha is struggling with a depressed daughter, an inert husband, twenty six hours worth of things to do each day and the worry that her own research and publishing have been allowed to flounder thus rendering her unemployable when her term as Senior Tutor ends.

I felt as if I knew James and Martha. Sometimes I wanted to shake Martha out of her denial and, yes let’s be honest, martyrish guilt. As much as her husband annoyed me as he lay about not even composing poetry in Italian as he was supposed to be doing, he did come out and tell her the truth that not everything is her fault or under her control. Then I stopped and realized that for me to care this much about her, you’d done a good job in making her real. Meanwhile James’ concerns about being accepted in this rarefied world of academic women ring true to anyone embarking on a new career while trying to avoid a misstep. I wavered back and forth about the issue he’s attempting to lead the Fellows through. Does the greater good justify the means or not?

The battle lines and mixed alliances faced over the course of two terms seem realistic from the small annoyances to the gigantic pitfalls. I did lose interest in the activities of certain of the students bent on creating conflicts though not in the way that James and Martha met them and deflected their sting. As I said earlier, I would like for there to have been a romance or even a HFN. Still, I did enjoy my foray into the behind the scenes struggles of the modern meeting the hallowed traditions in this fictional world of St. Radegund’s and in watching, and cheering on, a woman’s day to day struggle to basically do and be everything for everyone. Oh, and I totally agree that the chick lit cover doesn’t begin to do the book justice. B-