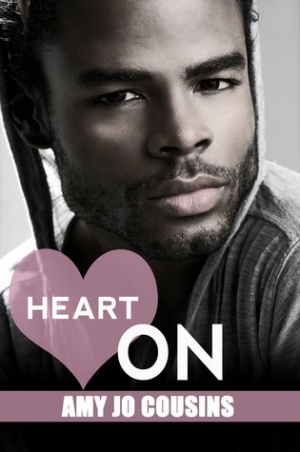 I recently read and enjoyed HeartShip, the first book in your Full Hearts series and immediately after, I read the follow up, HeartOn. While I don’t think it’s essential to read the first book to understand the second, there is some benefit to doing so. Josh and Benji (the main characters from HeartShip) feature strongly in HeartOn and Deion first appears in HeartShip also, as does Carlos, albeit, very briefly.

The series is intended to be low angst and on the lighter side, so there isn’t a lot of conflict keeping the two characters apart. Deion McCaskill is an NFL player on the for the Kansas City Chiefs (that’s him on the cover – isn’t he gorgeous?) but is currently on the injured list due to a shoulder separation. It’s very possible he won’t play in the NFL again but he’s not ready to face what that might mean, or consider what will be next if he can’t play. So, he decides to visit his friends, Josh & Benji in Florida for two weeks. There, he meets up with Benji’s friend (and now Josh’s friend too), Carlos Acosta, with whom Deion has interacted on Twitter and even met briefly once before.

Both Carlos and Deion are bisexual but neither has admitted it  to anyone, except maybe themselves. Carlos has a fairly conservative extended Puerto Rican family, even though he believes his parents would be okay with his sexuality. Deion knows his family would be cool, but out NFL players are thin on the ground and he’s not sure he’s ready for the spotlight to be shone on his sex life. It’s easier to date women.

But Deion and Carlos are irresistibly drawn to one another. Maybe what happens in Florida can stay in Florida?

They decide to explore their bi sides with each other and keep it a secret even from their friends. The plan after that is for both of them to go back to their lives. (This is a romance so of course that’s not going to happen.)

But Deion lives in Kansas City (if he’s still playing football) and neither of them are out. As their two weeks pass, each comes to the realisation that their feelings are most definitely in play. Given the concerns each had about others finding out they were bi, I must say, the change to being willing to be open about it seemed very fast. Of course, so did the romance – there is a brief section before the epilogue where a couple of months have passed, but most of the story takes place in a fortnight.

Considering the uncertain future Deion faces and the issues about coming out both of them have, none of those things were deeply addressed in the story. Rather, they were briefly touched upon, the reader was reassured that everything was okay and voila! HEA. I know the story was intended to be on the fluffy side of the spectrum but I’d have liked a little more detail on how those things were processed by the guys because I wasn’t quite ready to let them go.

However, I did like the interaction between Deion and Carlos. I enjoyed their chemistry and their open enjoyment of each other’s bodies. They also didn’t just have sex, which I appreciated. They hung out together and enjoyed each other’s company.

Much was made in both books in the series of the fact that Deion had not managed to have a relationship with a woman which lasted beyond a month or so. There was the suggestion that this may simply have been because Deion had been actively suppressing part of himself and so had been unable to be truly himself with anyone before Carlos. That definitely made sense. It also could be the case that Deion is homo-romantic. Even though it seemed clear that Carlos and Deion intended to be monogamous, they both still identify as bi and that representation matters.

I also enjoyed the way the guys’ friendships with Josh and Benji were presented and their broader crew as well. And, of course, it was nice to check in on Josh and Benji and see how they were doing.

The epilogue is set in present day Puerto Rico and paid respect to the ongoing rebuilding after Hurricane Maria. There was also little about Carlos’s family in Miami hosting and supporting various Puerto Rican family members after the hurricane ravaged the island.  There’s an author’s note in the front that the epilogue was rewritten after Maria to reflect reality which made sense because Carlos is a Puerto Rican man so of course the hurricane would have a big impact on his life. The novel could hardly have reflected Carlos’s culture without mentioning it.

While I could have done with a little more exploration of some of the issues which Deion and Carlos faced, there was a lot to enjoy in HeartOn. There will be more Full Hearts books coming up and I’m looking forward to catching up with the guys and seeing who Owen ends up with too.